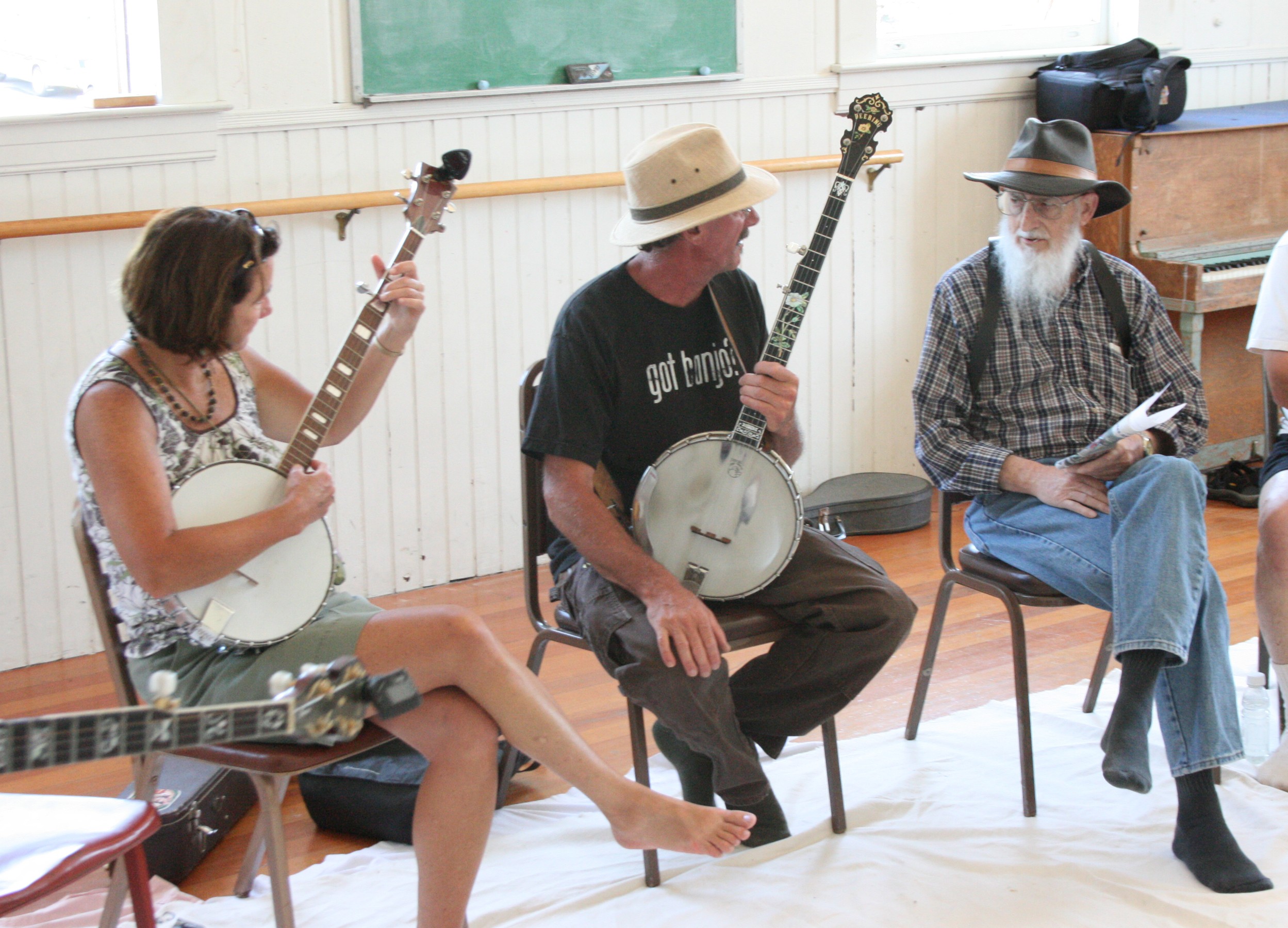 I've received a few emails and a bunch of Facebook invites in the last week or so asking for help getting the word out about the Humboldt Folklife Society's much anticipated Folk School Music Camp, which runs next week, Monday through Friday, morning to night in Blue Lake. The school is a dream fulfillment for Folklifers who have been talking about it and working toward it for ages, but to be honest, I did not really understand the demographics -- as in, who is the school for, kids or grown-ups?

I asked HFS President Patrick Cleary. And he said: Both. As the Folklife news release puts it, there are "classes of interest for all age groups: toddler to elder."

"The morning stuff is geared to kids," Cleary explained. He figures moms and/or dads who want the kids to get some exposure to music will bring the family out to Blue Lake during the day. Then there are the after-work classes. "Starting at 5, it's all ages, but geared more toward adults."

Morning and afternoon classes aimed at kids include a rhythm workshop with drummer Jesse Jonathon and Lisa Monet on beginning ukulele for families. Jose Quezada and Carla Pagalia offer "North Coast Music Together" for kids up to kindergarten age (Quezada is the ubiquitous freelance photographer whose work you see almost daily in the T-S). There's also something called the Music Instrument Petting Zoo a couple of afternoons, where anyone can "see, hear and touch the instruments they may wish play."

Most of the classes will be held on Dell'Arte's auxiliary "River Campus," a collection of rooms in Blue Lake's industrial park next to the Mad River Brewery Tasting Room. Cost: $5 a class. HFS emphasizes that this is a pilot program for the Folk School. It also seems to be a work in progress -- more classes may be added. Check humboldtfolklife.org for a complete schedule and additional details or to register for classes.

There's something primal and irresistible about a New Orleans brass band doing the second line; add in a dose of funk and, well, you've got me. And when it comes to mixing funk and jazz into traditional N'Arlins sounds, The Dirty Dozen Brass Band is the pioneer. Since its founding in 1977 as the end result of a successful youth music program (a bit like our new Folk School), the Dirty Dozen basically created a new tradition. Thirty-five years later the band is still going strong. The DDBB summer tour is on its way to Outside Lands in Golden Gate Park this weekend. (The sold-out festival also includes Stevie Wonder, Neil Young, Metallica, The Foo Fighters, Jack White, Skrillex and many, many others.) But first, DDBB stops off for a Thursday show at Humboldt Brews with Honey Island Swamp Band, a group of New Orleans Katrina refugees who came together at San Francisco's Boom Boom Room to play roots rock they call "Bayou Americana." I'm there.

Jerry Garcia's birthday may have been last week, but the Deadhead shows haven't stopped. Psychedelic/country jam prototypes New Riders of the Purple Sage are in town for a couple of gigs. Guitarist David Nelson founded the band back in the '70s with Garcia on pedal steel. Buddy Cage took over Jerry's chair when he got too busy; he's still a Rider. Others include mandolinist/guitarist Michael Falzarano from Hot Tuna and bassist Ron Penque from JGB. The Riders play Saturday at Swain's Flat Outpost with Eric Lambert and Friends and Jay Roller. Then, on Monday, they're at the Mateel with Elephant Dub Brigade and Knights of the Van Duzen, a benefit for George Danson and his family -- one of those broken health care system things. Danson, father of four with another on the way, is fighting cancer and has major bills to pay. Friends are helping out with a raffle and an auction, so bring some extra cash.

Then there's the Normal Bean Band with Tom Constanten, playing Friday and Saturday at the Red Fox. Keyboardist Constanten was a friend of Phil Lesh; they roomed together in the early '60s while studying modern music at Mills College. When the Dead were recording Anthem Of the Sun, Constanten joined up. He worked on a couple more records, then left in 1970. In 1994, he was inducted into the Rock ‘n' Roll Hall of Fame as a member of the Dead. Also in the band, Cecil "PNut" Daniels, a midi-sax player who sometimes jams with Wide Spread Panic.

Returning to the topic of healthcare benefits, the next BA-DUM-CHH comedy open mic, Tuesday at the Jambalaya, is subtitled "Comedy for Caleb's Sake," with proceeds going to (uninsured) Denver-based comic Caleb Medley, who was shot in the Aurora Dark Knight massacre.

Need a Celtic fix? Molly's Revenge returns to the Arcata Playhouse Thursday with a new line-up: Stuart Mason on guitar and mandola, David Brewer on pipes, whistles and bodhran, John Weed on fiddle. Special guest on this show is champion fiddler Rebecca Lomnicky, winner of the Glenfiddich International Scottish Fiddle Championship in 2009. (Would she still be deemed second fiddle?)

Friday is shaping up as a dueling dance parties night: The Ocean Grove has EDM with DJ OnHell, Devstep and Bass Case. It's '80s Night (and Arts! Arcata) at Jambalaya, with Gabe Pressure spinning records along with DJs Anya and Knutz, but there's some serious competition: The vinyl crowd will also be celebrating Mantease's birthday at another Missing Links Soul Night with the usual suspects and special guest DJ Red, who suggests, "Wear something lightweight. We're bringing the heat."

It's a totally different sort of dancing, and I'm not even sure there's room to dance, but Chubritza International Folk Band is taking listeners on "a musical trip around the world" that same night at Westhaven Center for the Arts.

Keyboardist Dave Fleschner is one of those musicians who grew up here then moved to Portland, where among other things he's been playing in Curtis Salgado's R&B band. Fleschner is back home next week and playing a Tuesday night gig at the Westhaven Center.

The two mainstays of the local EDM scene are Christopher Jonas Moore, aka DJ Touch of Deep Groove Society, who sees to it that there's dance music at the Jambalaya for Sundaze (every Sunday), and Miles "Psy Fi" Ross, who runs Whomp Whomp Wednesdays at Nocturnum. This coming Wednesday, Psy Fi hosts the Third Annual How The West Was Whomped, Pacific Rim Edition, a Western-themed dance party at Nocturnum. He'll play music along with his Ooze Records label mate Ratchet and two Pacific Rim DJs: Kalya Scintilla from Australia, who somehow mixes dubstep and glitch hop with sounds from the Middle East and traditional gypsy music, and Japanese dubstep star Takeaki Maruyama aka Goth Trad, who runs a dance music night in Shibuya ward, downtown Tokyo, called "Back To Chill." BassCraft Soundsystem is bringing those gut-shaking low-end speakers, Beams Lasers and Lighting the visuals. Added bonus: a mechanical bull in keeping with the Western motif. Did we mention it's Psy Fi's birthday? Hey, have a whompin' good time.