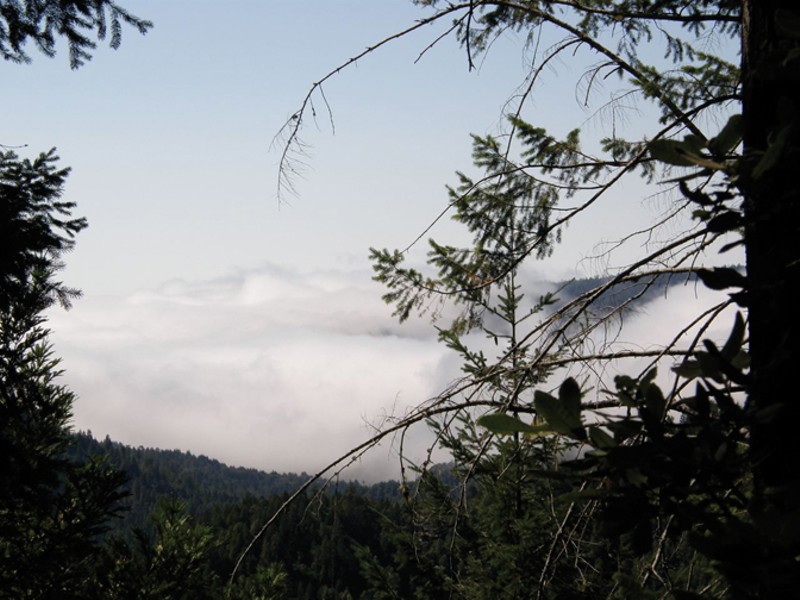 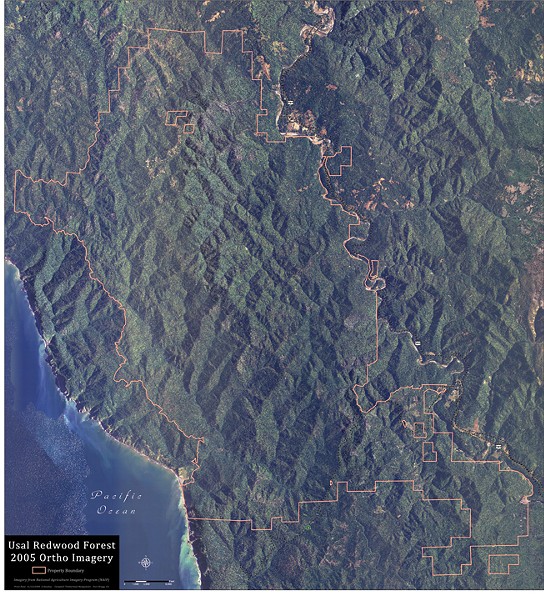 Courtesy the Redwood Forest Foundation, Inc. The Usal Forest is located west of Hwy. 101 between Leggett and Piercy and extends nearly to Sinkyone Wilderness State Park.

Courtesy the Redwood Forest Foundation, Inc. A waterfall in the Usal Forest.

Longtime lumberman Art Harwood is a veteran of the Timber Wars, and he remembers the summer when loggers and environmentalists started talking to each other -- really talking. It was during the Redwood Summer protests of 1990. Hoping to avoid violence, a group of loggers, mill workers and environmentalists got together to establish some rules of engagement. Before long they found common ground.

"I discovered that my 10-year-old son's girlfriend was the Earth First! leader's daughter," Harwood recalled in a phone interview last week. "These kids were all on the same Little Leagues and soccer teams. We thought, 'OK, well, maybe we better communicate here.' ... As it turned out, people started figuring out that they didn't really disagree on as much as they thought."

Twenty-one years later the lines that separate forestry from environmentalism have blurred so much as to be virtually invisible in places. Harwood is now the executive director of the Redwood Forest Foundation, Inc. (RFFI), a nonprofit whose mission is "to acquire, protect, restore, and manage forestlands" on the North Coast "for the long-term benefit of the communities located there."

The group's latest endeavor involves a 50,000-acre tract of land called the Usal Redwood Forest. Located in the northwest corner of Mendocino county, the property -- once a thriving forest of ancient redwoods and Douglas fir -- was heavily logged in the 1970s and '80s. RFFI purchased the property in 2007 with a $65 million "green loan" from Bank of America. RFFI's directors are now pursuing a conservation easement through the Wildlife Conservation Board, a division of the California Department of Fish & Game, as a way to pay back some of that debt while protecting the land.

Here's how that would work: In exchange for $19.5 million in state funds (financed from bond sales authorized through 2006's Proposition 84), RFFI would permanently give up all development rights on the property and would agree to restrict logging to cuts that could be certified by the Forest Stewardship Council.

The deal was slated for approval at a Feb. 24 meeting of the Wildlife Conservation Board, but the state agency unexpectedly delayed its decision. Harwood was -- and remains -- incensed.

"In the four days before the meeting they had 370 emails in support [of the deal]," he said. The easement agreement was also endorsed by the Humboldt County Board of Supervisors, the Mendocino Board of Supervisors (both unanimously), several local city councils and the Save the Redwoods League, among others. "The list just goes on and on," Harwood said. "And there was one letter against it. And that letter came from the Mendocino Redwood Co."

Specifically it came from Sandy Dean, chairman of the Mendocino Redwood Co. and its subsidiary, the Humboldt Redwood Co. Dated Feb. 22, Dean's letter listed a number of concerns, chief among them the expenditure of taxpayer money and "the lack of transparency" in the WCB's appraisal process, which is used to calculate the value of conservation easements. Dean wrote that his objections were "in the interest of the people of California and their needs, which have to come first... ."

His letter had the intended effect: At the WCB meeting two days later, the board voted to postpone its approval of the conservation easement pending an independent review of the appraisal. It also agreed to post that review publicly 30 days in advance of a board action. This, the board said, would provide "more transparency to a large project." That review is currently underway.

Harwood said he's not worried about scrutiny of the appraisal -- it was conducted by a licensed real estate appraiser in compliance with the Uniform Standards of Professional Appraisal Practice and reviewed by the State Department of General Services. What bothers him is that the WCB so readily capitulated to Dean's request. "We're concerned that the reasons they took this action are not entirely apparent," he said.

Indeed, Harwood believes there are hidden influences at work. Behind Dean's veneer of civic-minded indignation Harwood sees a timber company executive who's threatened by RFFI's model of nonprofit forestry. And in Mendocino Redwood Co. he sees a corporation that wields significant clout in the halls of Sacramento. MRC is owned by the Fisher family, a politically active clan that also owns multinational clothing retailer Gap Inc. Gov. Jerry Brown's wife, Anne Gust Brown, is a former chief administrative officer and executive vice president of the Gap.

Harwood offered no evidence of impropriety beyond the suggestive circumstances, but he maintains that Dean's stated objections simply don't hold water; why hasn't Dean complained about larger, more expensive conservation easements approved elsewhere in the state, for example, and why doesn't he hold his own company to the same standards of transparency that he's demanding of RFFI? Harwood added that the WCB's decision in February was unorthodox.

Chris Kelly, California program director for The Conservation Fund, a national nonprofit land conservation organization, agreed with Harwood. "Typically if something is on the [WCB] agenda then the board is ready to make a decision," said Kelly, whose organization has applications before the board for similar projects elsewhere in the state. "It is unusual for the WCB to apply additional standards at a meeting like that, [standards] that are not otherwise applicable to the project."

Concerns have been raised in the past over the state's appraisal process in such conservation easement deals. In 2004, then-Assemblyman John Laird introduced legislation -- later signed into law by Gov. Arnold Schwarzenegger -- requiring all state agencies spending more than $25 million on a land conservation project to get an independent appraisal of the property before purchase, and to have that appraisal reviewed by a second expert. That's precisely the process being imposed on the Usal Redwood Forest deal, but at $19.5 million in state funds, the project doesn't meet the stated threshold for this additional scrutiny.

Reached by phone last week, WCB Executive Director John Donnelly said the board found other grounds for the independent appraisal. "[M]y board felt the acreage in and of itself constituted -- in their minds -- a major acquisition," he said. Donnelly acknowledged that the board received a letter from Sandy Dean urging such measures, but he said he didn't know how influential the letter was. "That was not something that [the board] went on record to say happened." Their stated reasoning, he said, "was based on the size and the value of the project."

The Journal reached Sandy Dean by phone Monday, but he declined to comment on the record, instead referring the Journal back to letters posted on his company's website. Those letters date back to a 2007 missive, addressed to Donnelly, in which Dean and five other timber company representatives question the merits of three Prop. 84-funded conservation easements that had recently been completed. "Each of these transactions targeted lands zoned for timber production (TPZ) ... while containing little in the way of pristine forest attributes."

The letter expresses concern about "the effects on private sales" of such easements and suggests that timber companies -- like those of the signatories -- could perhaps do a better job protecting working forestlands: "Each of the signatories to this letter has a long-term vested interest in the successful stewardship of California forestlands...," the letter states.

Subsequent letters to Donnelly are from Dean alone. He acknowledges the value of the state's forest conservation program in theory, but he questions the methods used by the WCB to make funding decisions, the specifics of the agency's ecological objectives and, again, the perceived lack of transparency throughout the process.

In a response letter dated March 31, 2011, Donnelly defended the WCB's appraisal methods, but, somewhat paradoxically, he also assured Dean that the WCB will be re-evaluating those very methods and will take another look at the role of public disclosure in large-scale acquisitions. "Please be assured we will take your ideas into account as part of this effort," Donnelly wrote.

The next scheduled meeting of the WCB is June 2. However, since the independent review of the Usal Redwood Forest's appraisal has yet to be completed, a decision on that deal won't be made until a later date. Harwood is hopeful that, once again, perceived adversaries can find common ground.

"We just don't really understand MRC's motivation," he said. "We really want to be working with them, and we have to work with them. If we're gonna get beyond the Timber Wars, and more importantly, if we're gonna restore a vibrant, resource-based economy, then everybody needs to be working together, not at odds."