In Humboldt Bay, stories lurk within the rusting beaters and gleaming glories

Cody Hills leans back in the stern of the small boat owned by Humboldt Baykeeper, which is zipping north through the Eureka channel of Humboldt Bay. He looks as relaxed as if he were reclining on his living-room couch. Around him the water crinkles and winks, like smoothed-out foil gift wrap. Two frothy white tracks stretch parallel behind the moving boat, creating a broad path back in time.

Beyond the wake sits the Schneider Dock, which knew the bay when it was a working man's paradise, full of mills and ships and fishing boats, even whalers, and ferries. The work has dwindled -- there are mostly fishing boats now -- but stories linger out here, sealed in the grain of old wooden boats, in the iron cells of former war ships like the World War II Navy landing craft Ten Ninety-One, now a civilian museum ship docked north of the Schneider dock at Waterfront Drive and Commercial Street, and even in some of the more modern boats. 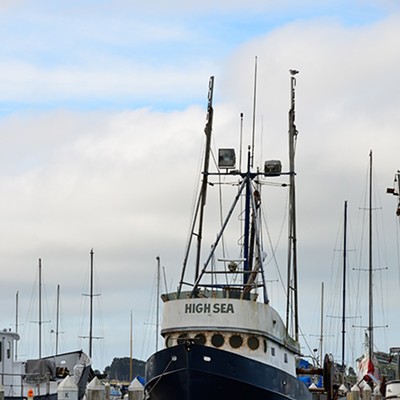 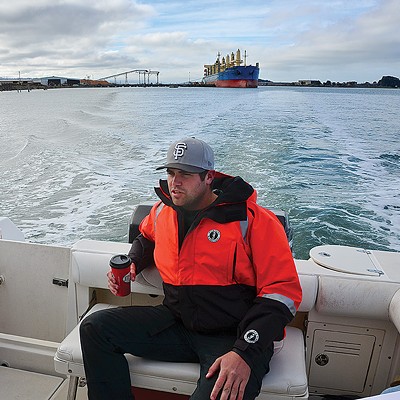 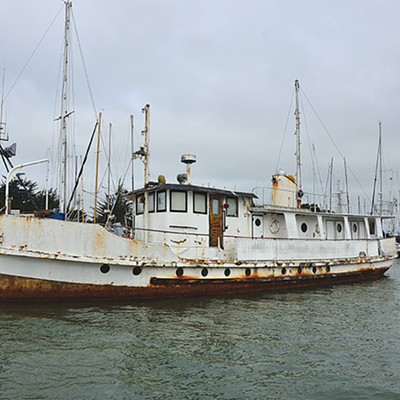 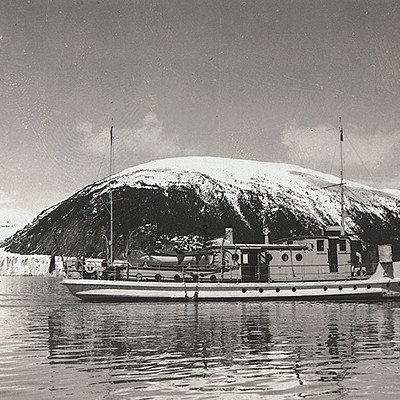 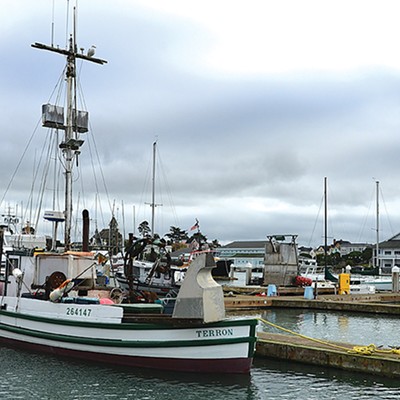 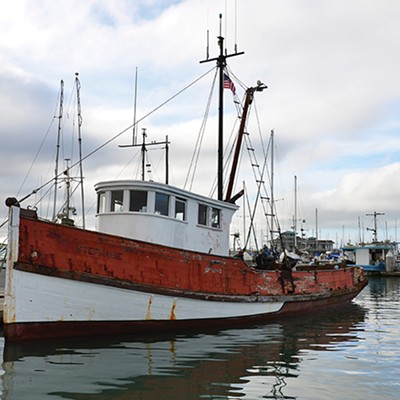 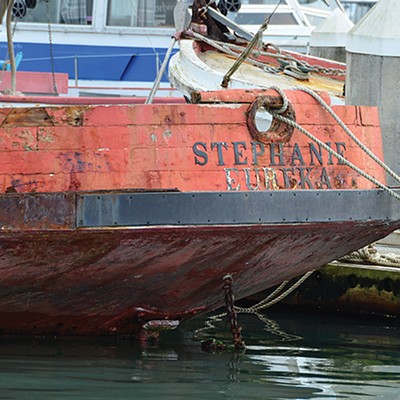 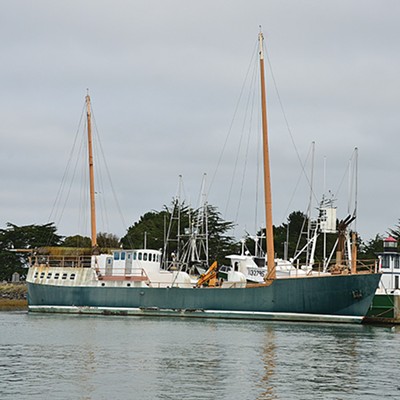 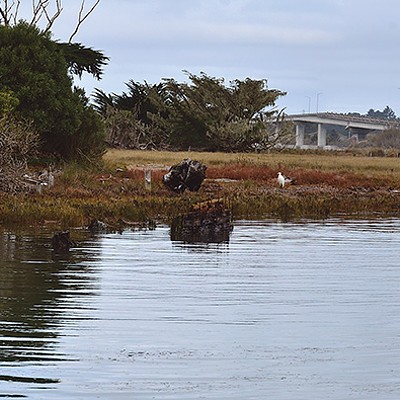 There are boats in this bay that look like old beaters, ready for retirement in some quiet, forgetting cove. And others, seemingly in good shape, that never leave port. There are nameless boats. There's a lovingly oiled wooden boat, "Admiral" Jim Blum's 1965, 49-foot golden-brown crab and tuna boat, the Tempest. Rescue barges. Ordinary old fishing boats, and new ones made by Eureka boat builder Ken Bates. And more.

Hills knows many if not most of them -- he's spent his whole young life so far living and working on the bay, drinking in the lore like an essential nutrient.

Sure, he's just a kid: 22. But he's Leroy Zerlang's kid: Zerlang, also reared on the bay, who owned the Crab Shack at the foot of C Street when Hills was young (he called Hills, to whom he's been father since Hills was 1, the "Crab Kid"); Zerlang, captain of the Madaket, the oldest boat on the bay, which began as a ferry boat in 1910 and turned into a harbor cruise boat in 1972, after the Samoa Bridge was built rendering ferries useless. Hills learned how to walk on the Madaket and how to row in a little boat tethered to the dock at the foot of I Street, outside his childhood home. Three years ago, he became the youngest licensed merchant marine captain in California (just like his dad before him).

Hills works for Brusco Tug & Barge and Knutson Towboat Co. and is one of just four remaining guys who operate tug boats to haul in the big ships. He also works for his dad at Zerlang and Zerlang Marine Services, the family's boat-repair business on the Samoa Peninsula. The Zerlang boat yard is where volunteers and local boatwright Dave Peterson are helping Veterans for Peace restore the Golden Rule, the little peace-protest ketch that in 1958 tried to storm the Marshall Islands atomic testing grounds.

Veteran Chuck DeWitt, who coordinates that restoration, is piloting the Baykeeper boat that carries Hills, another Veterans for Peace volunteer named Skip Oliver, and a couple of Journal staffers on this late-November morning.

Hills sits back in his bright orange jacket, his Giants cap shading blue eyes under dark bushy eyebrows, and a five o'clock shadow. Coffee cup in one hand. A person couldn't look more at home. His dad, actually, was the one who'd planned to conduct this history tour of the boats on Humboldt Bay. But engines blow, and duty calls. The son -- minus, granted, the load of crusty old jokes his dad's known for -- can step right in, launching the tour from the Eureka Public Marina.

At the marina, Hills points out the Christine, a 45-foot fir boat built in 1948 by the Makela Brothers, out of Fort Bragg. The Makelas' fishing boats can be spotted by their pale tan, white-tipped masts, and they're held together by nails instead of screws and epoxy. There used to be more Makelas here. Today there are four: The Sea Wolf, Pacific Seas and Katherine are across the bay in the Woodley Island Marina.

But where is Hills' dad? We want to hear more about that, so we zip down the channel toward the enormous, blue-and-red Fortune Amaryllis, out of Hong Kong. Zerlang is trying to assess its struck-dumb generators so it can load its cargo of logs and head to China. (The ship, a tramp steamer -- akin to an independent truck driver -- had last docked at a port in Vladivostock, Russia, where it filled one of its tanks with the special, low-sulfur fuel it would need to switch to when it reached California, Zerlang tells us later. It crossed the bar into the bay an hour before midnight Sunday, Nov. 25, tied up, and at 4 a.m., when the fuel switch was made, the generators all stopped. Phht. The Chinese crew suspected the fuel from Russia was bad, Zerlang says, and the ship's owner was flying in from Singapore, a repair specialist was coming in from Korea, and lawyers were coming in from Los Angeles and San Francisco.)

We regard the silent ship, then head back to the Eureka Marina, where we round the rusting hulk of the 1944-built Mary Ann Brusco, an old tugboat long docked, ever since the housing market went south in 2007 and log-shipping declined. Nearby, that bright blue barge with MSRC 136 on its hull, looking squat, flat and nonhistorical? That's the Thrustmaster -- if ever there's a fuel spill on the bay, it and its partner, the Recon 1, will be the first responders, laying out a containment boom and skimming the surface until mop-up crews arrive. Luckily, there hasn't been a spill on the bay since the Kuray, banging too hard into some pilings, punctured a tank and dumped 4,500 gallons of fuel into the water back in 1997.

The dark blue-and white High Sea, a 52-foot commercial fishing boat, rides ready nearby. After the 1964 tsunami that wiped out the Crescent City harbor and its fishing fleet, a Crescent City sheet metal workshop called Fashion Blacksmith started building boats to replenish the fleet; the High Sea, launched in 1971, was one of those.

And now we come to Hills' first true love, the Stephanie. The faded red "pair trawler," built from fir, is the second-oldest (mostly) functional boat on Humboldt Bay. It was built in 1917 by Genoa Boat Works for San Francisco International Fish Co., where it was called "No. 3." Its job was to work in tandem with another boat to drag a net for bottom fish. Tom Lazio -- locally famous for Lazio's, a beloved restaurant once at the foot of C Street -- got the boat in 1941 after the fish company, where he worked, went out of business. He named it after his daughter, Stephanie, brought it north and fished it until 1956 when it got stuck on a rock outside Crescent City. He sold it for a pittance, and 10 years later it was sold again, and the new owners brought it to Eureka. Hills remembers pestering the owner to let him wash the pretty workhorse when he was a little kid. He remembers hearing how, when the ocean got rough, the Stephanie's crew steered it backwards out the mouth of the bay so the waves wouldn't bust the pilot windows out.

Its pilot house burned one day in 2003; they rebuilt it. Then the federal government started paying dragnet boat operators to give up their boats -- their nets caught too many other creatures, including dolphins. The Stephanie was abandoned. But Hills has been looking after it, on his own dime, ever since. Earlier this year, after the boat had sprung serious leaks and he'd spent all night bailing it out, Hills and boatwright Peterson hauled it ashore and gave it seven new planks and 2,000 new screws.

We head farther south and cross the bay to the Woodley Island Marina. So many stories. There's the Nanbellis Jo, a 58-foot commercial fishing vessel that was the first boat in the bay to be widened in order to handle more gear, worse weather and more catch. On the other end of the scale there's the 39-foot Terron -- the sweetheart of the bay. The tidy, well-kept white boat with green stripes of trim around its hull was built in 1927, its boards fitted together so tight it didn't need caulking. Hills says the Terron's owner still fishes it pretty hard, for black cod, crab, salmon. DeWitt idles the boat a bit longer so everyone's eyes can linger on the pretty Terron.

Nearby lies the white, 37-foot fisher the Albatross, built in 1927 and one of the few double-enders in port -- meaning it has a pointed stern and bow, which makes it more stable, especially in a following sea with swells crashing against the stern. And then there's the Lohilani, a square-butted little cracker-box oblong built in 1943 that once was a Navy admiral's barge in Hawaii. When Hill was little, his grandma lived aboard the Lohilani; he remembers being babysat aboard it. It's owned by somebody else now.

The plain-looking Coast Pilot sits on the edge of the marina, facing Eureka -- a 1944-era former Coast Guard tug turned, inside, into a fancy live-aboard pleasure yacht, replete with jacuzzi on the back deck, grand stateroom, salon and big cooking galley. The Arcturus is nearby -- an iron ship first named the  Westdahl, built in 1929 to survey the west coast and the waters off Alaska for the Coast and Geodetic Survey. It was retired in 1946, and about 20 years ago was brought by a private owner to Eureka, where it's sat ever since.

We motor around the Humboldt State University's big, green research boat, the Coral Sea, to marvel at another huge green boat -- the 121-foot-long, skinny, nameless and now-stalled project of retired professor J.A. Gast. Gast, who founded HSU's oceanography department in 1961, started building the vessel in 1989, thinking it would be a good instruction ship. He once called it the Phuma -- a South African term that for him evokes "unusual, different," and that also means "go out" in Zulu. It's narrow, only 16 feet wide, and light for a steel boat its size, sitting high in the water. It's only left port a couple of times. It's a labor of love. (Gast tells us later that he still has the utilities left to install but his interest has waned.)

DeWitt zips our boat back into the bay and points it north. Hills has one more thing -- well, a couple -- left to show us. As we near the marshy shore of Indian Island, he points at a tiny warped-wood building on stilts at water's edge: The old Baptist church. Then, he says, see that copse of trees, where the egret rookery is? That's where Mia, the black lab and the Madaket's old mascot, is buried. She lived a long life, charming tourists by swimming after the Madaket, until she died when Hills was 4. Then he lowers his hand, drawing our eyes to what looks like a corroded old wood wall sticking out of the shallows by the shore. That, he says, is writer Jack London's old boat, the Christine. The nameboard, taken from it long ago, is now at the maritime museum.

It's hard to find evidence proving that this was indeed one of London's old boats, although a 1966 story in the Eureka Humboldt Standard also says it's so. London had several sail boats -- famously, The Snark -- and wrote in a memoir, "Four Horses and a Sailor," about sailing in Humboldt Bay. Like the 1910 barfight between London and Stanwood Murphy in the Oberon Saloon in Eureka -- recorded later by eyewitness W.J. "Hap" Waters -- the story lives on.