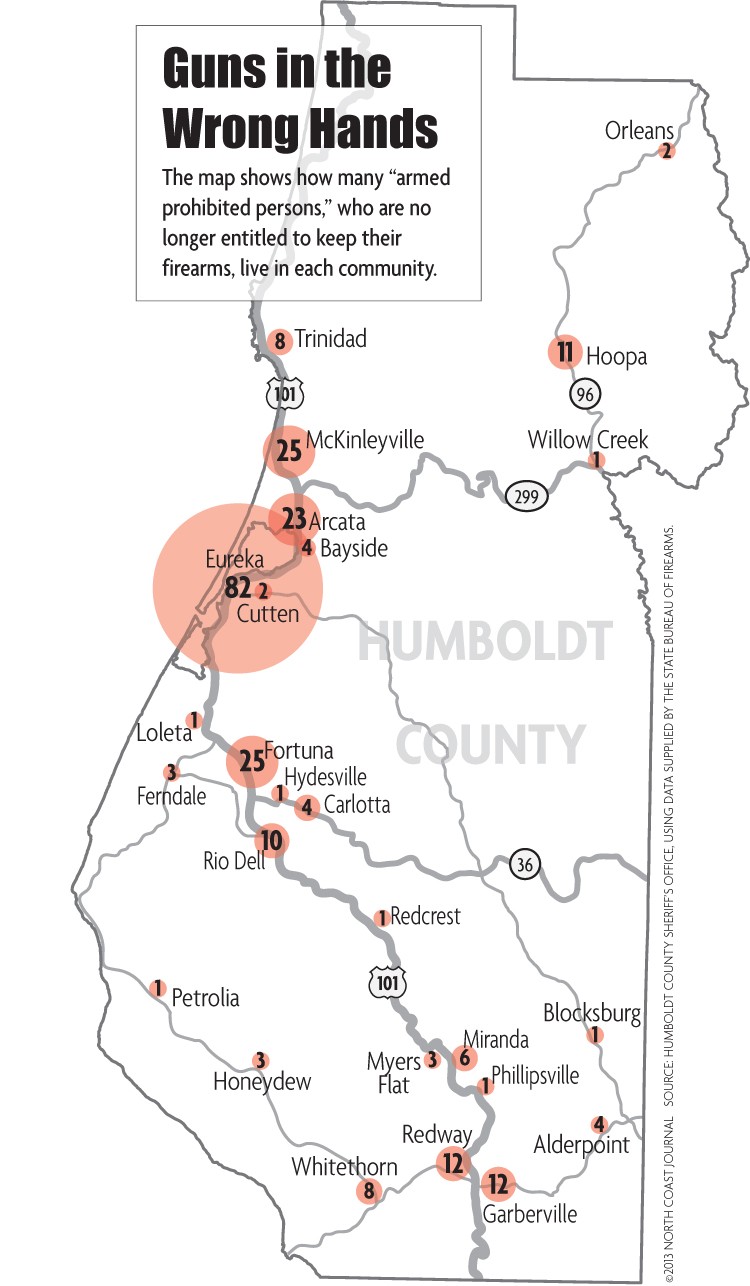 Every month, the state of California sends police departments and county sheriffs all over the state a list of the people who just about everybody -- including the NRA -- agrees shouldn't have guns.

These are people who once did paperwork with the state indicating they have at least one gun. Then, later, they did something that makes it clear, under state law, that they are no longer entitled to own the weapon. Maybe they spent time in a mental institution recently. Or were convicted of a violent crime. Or had a domestic violence restraining order issued against them.

In early January, 258 of those people lived in Humboldt County, according to the state Bureau of Firearms. And even though the bureau provides that list to the Humboldt County Sheriff's Office, the sheriff says his force is too understaffed to investigate.

"We don't actively work that list," said Sheriff Michael Downey. "We don't have the manpower to do that kind of exhaustive check" of visiting each listed gun owner at home and asking him or her to surrender the weapon.

Some local police agencies, in places like Oakland, Stockton and Richmond, do use the list to contact people and take their weapons, said Steve Lindley, chief of the state Bureau of Firearms.

"We encourage them to work those cases, to identify the individuals on that list and try to secure the firearms from them," Lindley said. But many do not. "With the cuts to law enforcement, they just can't do all the things all the time, and they have to set their priorities based on the needs of the community," he said.

The list of "Armed Prohibited Persons," which has been available to local law enforcement since 2007, is the only one like it in the country. Lindley said that roughly a third of those on it are there for mental health reasons.

Contacting those listed isn't a cakewalk, he said. They are by definition current or former gun owners who have problems with violence or mental illness. And just being on the list isn't grounds for a search warrant, so often the first step officers must take is simply talking to the individual involved and asking about weapons.

Sheriff Downey worries that could mean a lot of wasted time.

"If we go to his house and knock on his door, he may tell us, ‘I don't have any guns,' so at that point we're done," Downey said. "So it's basically whether they're being verbally compliant."

Still, that's not a useless exercise, and some shortcuts are available.

San Francisco police told KGO TV early last year that in the first two months of using the list, it had looked into more than 100 people and confiscated 53 guns.

In Humboldt, it appears that no one has even tried, although Downey's office does check the list sporadically against people who have a permit to carry a concealed weapon. It does not forward the list to probation officers.

Along with the sheriff, who as the lead law enforcement officer gets the name of everyone listed in the county, each Humboldt city with its own police force gets access to the list, Lindley said. To his knowledge, not one of them routinely tries to contact listed individuals.

Eureka police didn't even know they were eligible to log in and get the information -- and that they had designated a detective named Todd Wilcox as the authorized recipient -- until the Journal called asking about it.

"It was being sent to me unbeknownst to me," Wilcox said Monday. He likes the idea of going after those on the list but said he'll have to talk with his superiors about how to fit that in with other needed police work.

"It's a good demographic to focus on --- people who have been ordered not to possess and who have already told us that they do, or they did" possess a gun, Wilcox said. If the department decides to act on the list, it might make sense to start with people who are on "searchable" probation, and so can have their homes searched without a warrant.

The state's master list changes daily, as new people are added and some restrictions expire. The latest list sent to the sheriff shows 82 prohibited gun owners in Eureka, 25 in in Fortuna, 25 in McKinleyville, 23 in Arcata, and others scattered all over the county, including eight in Trinidad and four in Bayside.

Among them, those people owned more than 500 guns when they came to the state's attention, according to the sheriff's office; 30 were banned from gun ownership because of mental health issues and 56 because of domestic violence restraining orders.

Fortuna Police Chief William Dobberstein and Ferndale Police Chief Bert Smith also had never heard of the list until the Journal called. It turns out that Fortuna's account hadn't been fully activated, and Ferndale's was for a former chief.

"I'm gald you're doing a story on it," said Robin Paul, office supervisor for the Fortuna Police Department, who reactivated her city's account Monday afternoon. "I'm certainly going to be sharing this information with the chief."

Arcata Police Chief Tom Chapman said he, too, was unaware of just who in his department has access to the names and contact information of the 23 "armed prohibited persons" in Arcata. He said late Monday that he wants to take a look at it before deciding what -- if anything -- to do next.