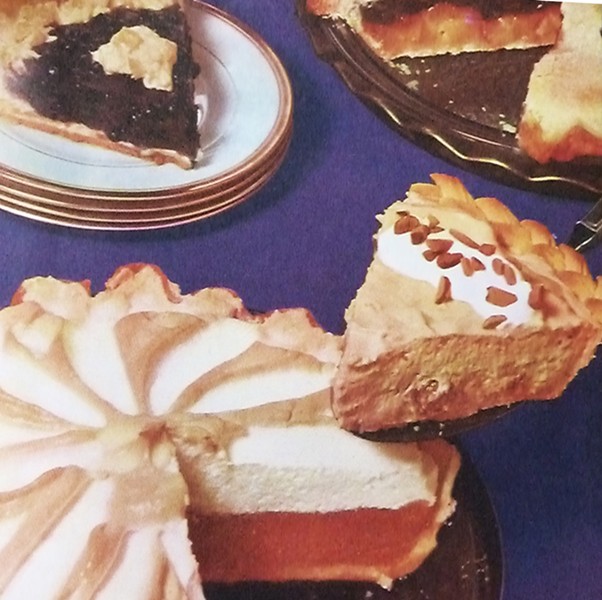 Sometimes I long for the simple days of classic American cooking and culturally assigned gender roles. Ah, to be a woman trapped in the kitchen, with five squalling brats and an apron collection fit to beat the band.

That's the problem with today, all these exhausting options and freedoms. Not only do I have to worry about my choice of career, religion and plastic surgeon, but I have to worry about whose allergies I might offend with my cooking. Imagine the days when Thai lemongrass, sous-vide cooking, and basil-infused port foam weren't culinary choices. Babies ate peanuts. Hamburgers practically grew on trees. To impress a date, a menu of steak, potatoes, canned peas, and cream pie could hook you a dreamy Joe. The cook's biggest concern was whether or not to put marshmallows in the Jell-o mold.

Was it really so, this halcyon vision of limited choices and unsophisticated palates? Once upon a time, there was a whole nation that had never tasted kohlrabi! "Vegetables" meant about a third of what it does now. I tremble to think of life without jicama, but salads would be simpler.

Cooking contests can provide us with a plethora of documentation about how folks cook (or at least how manufacturers hope we cook -- see the Betty Crocker Cookie-Off and the Ramen Noodle Mania Contest). I just love American niche competitions. What Mark Twain or Max Beerbohm might have made of the insular worlds of competitive dog grooming, chainsaw art and Spam devotees!

My absolute favorite food event is the Pillsbury Bake-Off. It was launched in 1949, and still happens annually; the grand prize is now up to a million dollars. The competition attracts more than a million entries, yet it still retains a stubbornly amateur attitude: Contestants cannot be professionally trained or employed in culinary fields (that includes food writers! Quelle dommage).

Cooking is ubiquitous, and as such is an excellent reflection of the development, broadly, of national tastes. Apparently the home cooks of America have become slightly more worldly: Candy Bar Cookies, 1961's Grand Prize Winner, gave way to Chicken Florentine Panini (2002). I say slightly; so far I don't see any Ferran Adria-style sneckens or even Alice Waters fern fronds in brown butter.

The American home cook, judging from the Pillsbury website, likes: a) beef in many forms and b) very sweet and gooey desserts. I could spend a paragraph being snide and condescending, but why bother? I love both those things, and Pillsbury Bake-Off Booklets are absolutely dripping with both as well as lots of jammy lurid color pictures of such delights as Corned Beef Pinwheels, Fun-do Fondue and Chuckwagon Round Up.

I have at hand 1964 and '65's 100 Best Bake-Off Recipes booklets, and I have drawn several pithy conclusions about these years. Art Linkletter was desirable; women used their husbands' first AND last names; and pie must be on the dinner table under pain of death. The meat dishes mostly sound terrifying but the desserts sound orgasmic. Those were the days when every one-armed sightless hausfrau could whip up a pie crust. The modern tired home cook will often just blast some Cool Whip into a store-bought crust, but in 1961 a true-blue Betty had to use her pastry chops to keep hubby happy, at least so one infers from the Bake-Off Booklets.

The cookie recipes were more flexible -- less gelatin, more oatmeal (literally, more flexible, ha!). They all sound quite delicious, made without mixes and with lots of chocolate and butter and things. I adore chewy, unctuous sweets crammed with fruit and spices, like Frosted Fruit Jumbles, or buttery ones with caramelized brown sugar, like Butterscotch Pinwheels. I really don't understand people without a sweet tooth. It's like people who enjoy catfish. What goes on in their minds? Anyway, more Crunchy Date Slices for the rest of us.

The pie recipe included here is perfect for anyone addicted to Ben and Jerry's Heath Bar Crunch (which, of course, came much later in culinary history). It's as unsophisticated and decadent as it sounds. I love rich, creamy mousses like this. I dream of using them as a saturating, sugary, edible lotion.

What better to follow pie than cookies? Slavering over the photos of such delights as Macaroonies, Spicecles, Oriental Treasure Cookies and Plantation Prides, I finally decided to try Chocolate Beau Catchers. I could use a new beau, or, failing that, some consoling chocolate cookies. These are very good, if you like chocolate things with buttery icing. [Editor's note: She speaks the truth.]

Remove from heat. Stir in toffee bars until partially melted. Chill until thickened but not set.

Chill until firm, at least three hours. Garnish with almonds.

Melt in a double boiler:

Whisk in 1 teaspoon vanilla and add to the butter mixture.

Lightly combine wet and dry ingredients, and then stir in

Let cool 20 minutes before frosting with:

Blend in 1 1/2 to 2 cups powdered sugar until desired consistency is reached.