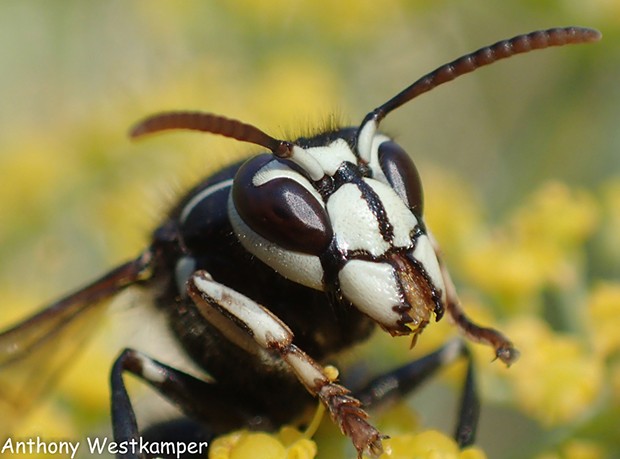 Over the next few days I visited often. Whenever I got too close, she let me know by facing me, putting her wings back in a "V" shape and vibrating them loudly. To quote an immigrant friend, "I love this country, even the snakes warn you." Not only does she sport black and (well almost) yellow aposematic coloration (conspicuous coloration or markings of an animal serving to warn off predators), but also what I've termed "aposematic sonification." Like a rattlesnake, she makes warning sounds. 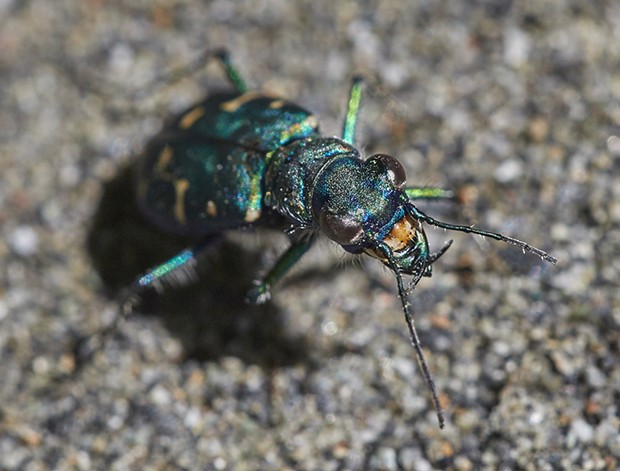 Beetles in the spring

While beetles were my first love when I started studying insects and are believed to have the greatest number of species of any of the insect orders, I find I seldom write about them.

Two years ago I wrote about the night stalking tiger beetle (Omus californicus), a nocturnal terror with a Darth Vader demeanor ("Darth Omus," May 4, 2017). That was the first one I'd ever seen, and I was impressed by its ferocious face. This year I've seen several, both at night and in the daytime. Like their cousins within the family Carabidae, they possess huge mandibles to subdue prey and with which the males hold onto their mates.

Unlike genus Omus, which are completely black, the locally common western tiger beetle (Cicindela oregona) comes in various hues, from a conservative faun gray to iridescent blue green. On close inspection even the somber hued ones have metallic undertones. You can find these on the sandy spaces along our local river bars. At about half an inch long, they run rapidly ahead of you and take wing, flying a short distance to get out of your way.

Read more of Anthony Westkamper's HumBug on Sundays at www.northcoastjournal.com.