Welsh teabread to warm your bones 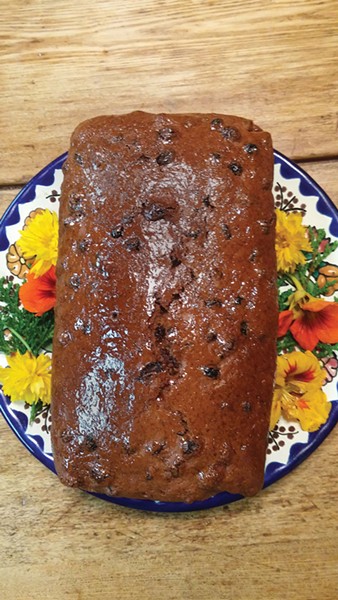 Photo by Jada Calypso Brotman As they say in Wales, bendigedig — fantastic.

Way back in the aughts, in bonny Scotland, there existed for one shining year possibly the Greatest Band Ever. I was fortunate enough to be part of this swell international gang, known as Yay Us!, which consisted of myself, two Tasmanians, a Scot and a Welsh woman. One of our greatest hits heard us all yelling out the names of our sweet hometowns (yes, I belted out, "Arcata, California"), and Mererid (pronounced Mer-ER-id) sweetly sang, "Aberystwyth, Wales" in her lovely Welsh lilt. My curiosity was piqued. Three years in Scotland, and I never made it to Wales. What could these musically speaking, vowel-deficient people eat down there at the bottom of the island?

Fast forward a little more than a decade to this past September, when, battered but still game, I finally visited Mererid Williams and her family at what has got to be one of the most halcyon places in the world. Mer's family sheep farm, called Cynnullmawr, which means "great gathering place," has been in the family 300 years and is still functioning. Chock-full of rolling soft green hills, morning mist and blue sea views, there is nothing nicer than going for a ramble with one of the working dogs and coming home to tea bread and cocoa in front of the stove while Mer's father mutters Welsh obscenities at the sports page. Cynnullmawr was recently discovered to have been a pagan gathering place, which means God knows what — wicker men? Sheep sacrifice? Nowadays, it's far from pagan. Just verdant hills and gamboling sheep, all the way to the sea.

Mer's parents, Eluned and Hywell Odwyn Williams, speak only Welsh at home but, despite the communication barrier, they still managed to be the most fantastic hosts I could have asked for. Eluned, who speaks English well and goes by Lynette in American company, had me sample various Welsh tasties, including that tea bread called bara brith (pronounced "bara breeth"), for which I promptly demanded her recipe and have been chuffed to make here at home on the regular. The Welsh eat it year round but it's particularly suited to cold afternoons with a hot drink. It has very little fat so of course you must spread each slice with lots of butter. Toasted, ideally. It also keeps fantastically. Put some lamb in the oven and a rugby match on telly, pour a cuppa and toast a nice bit of bara brith, and figure out how to pronounce Cynnullmawr. There you go, saved you the ticket price to Wales.

One thing I'll say about Bara Brith: You have to like raisins. If you're one of those unfortunate raisin haters, forget the whole thing. Another thing is it's insanely easy to make. Easiest ever. It does have a long baking time but it makes the house smell great.

Mix the tea, sugar and raisins and either gently heat the mixture for 10 minutes to soften the raisins or let it sit for a few hours to overnight.

Heat the oven to 325 F. Butter a loaf pan and line it with parchment. Beat the egg into the wet mixture, then add all the dry ingredients and mix well. Pour the batter into the pan, smooth the top, and bake it for 90 minutes.

Lower the heat to 275 F and bake for one more hour, until a skewer inserted comes out clean. Tip the hot loaf onto a rack, remove the parchment and flip it back over. Glaze the top of the loaf with honey. Let it cool and serve sliced with butter.