Talking farm and food politics with the candidate 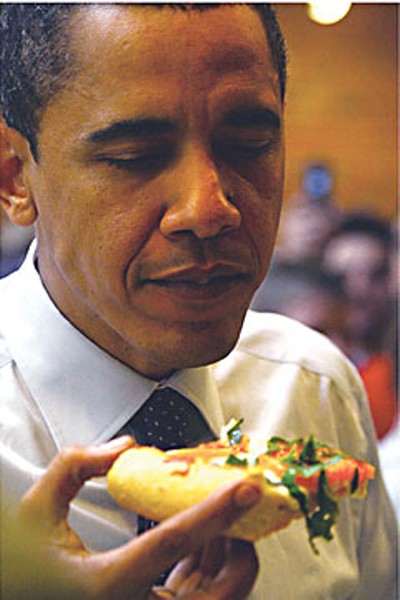 Food and agriculture issues might not make the headlines very often in a presidential race, but they affect everything from health to energy policy, and touch on a lot of ethical, economic and environmental issues along the way. Thus, I’ve been trying for weeks to reach Republican Sen. John McCain and Democratic Senators Hillary Clinton and Barack Obama, seeking their comments on a variety of food fronts. While the first two candidates have not yet responded, the Obama campaign invited an e-mail exchange with the Senator.

Chef Ari: You voted for the Farm Bill, despite the enormous subsidies it provides to wealthy farmers. Why?

Barack Obama: The Farm Bill has many positive provisions, in particular, an increase in federal funding for the development of renewable fuels, which will help reduce our nation’s dependence on foreign oil. The legislation provides an additional $10.3 billion for nutrition assistance programs, such as food stamps and school lunches.

Although the Farm Bill is far from perfect, I support the legislation because it recognizes the important role of America’s farmers and ranchers, and the need to develop our rural economy. It is regrettable that John McCain [who voted against it] does not agree.

While the Farm Bill does lower significantly the income limits of farmers eligible for subsidies, it doesn’t provide as much reform as I have advocated.

As president, how would you work to hogtie this piece of runaway pork?

In part, this is due to the disproportionate role that lobbyists play in the legislative process. As president, I would work with farm state legislators to pass additional reforms to reduce wasteful subsidies.

You’ve been praised for showing backbone in opposing the so-called gas tax holiday. Can you give a food/agriculture example of disconnect between what Americans might want to hear and what they might need to hear?

We have a serious obesity problem in this country not only among adults but also among children. As the number of obese children has increased, so has the number of children developing serious health conditions, such as diabetes. Given the busy lives that working parents lead, I know it’s easier to take your children to a fast food restaurant than it is to cook a balanced meal at home using fresh fruits and vegetables. But the eating habits that children develop when they are young will last with them for their entire lives. As president, I would use the bully pulpit of the office to encourage parents to devote more time to ensuring that their children are eating healthy meals.

Your hometown of Chicago is served by Angelic Organics, a local family farm featured in the 2007 documentary The Real Dirt on Farmer John, which Al Gore called “Incredibly special.”

Unfortunately, I have not had time to see the film, but I am very familiar with the great work of Angelic Organics and other community supported farms. These types of farms can provide an important source of fresh fruits and vegetables to inner city communities that do not have easy access to grocery stores that sell organic foods. Moreover, farms like Angelic Organics that sell directly to consumers cut out all of the middlemen and get full retail price for their food, which increases the financial viability of small family farms.

As president, I would implement USDA policies that promote local and regional food systems, including assisting states to develop programs aimed at community supported farms. I also support a national farm-to-school program and am pleased that the Farm Bill provides more than $1 billion to expand healthy snacks in our schools.

You support ethanol and other biofuels as clean and renewable alternatives to foreign oil. As president, how would you make sure enough agriculture land stays planted in food?

I have been a long-time supporter of home-grown biofuels, but I believe that corn ethanol should be a transitional fuel source as we move towards more advanced cellulosic ethanol, which can be made from agricultural waste products, switchgrass, sustainably harvested forest biomass and other renewable feedstock.

As president, what would you do to ensure a safe, humane and clean meat supply?

As president, I would direct the Environmental Protection Agency to strictly monitor and regulate pollution from large factory farms, with tough fines for those that violate environmental standards. I also support efforts to provide more meaningful local control over these factory farms.

As for protecting our nation’s food supply, USDA and the Food and Drug Administration need more authority to issue and enforce recalls for contaminated food. I support efforts to improve federal food safety surveillance to better improve our ability to identify, contain and prevent outbreaks. We also need to expand resources to inform the public when an outbreak happens. With regard to our meat supply, I support the USDA’s recent decision to ban all nonambulatory cattle from slaughter. I would also increase funding for meat inspectors to ensure compliance with current federal laws.

What would you be looking for in a Secretary of Agriculture?

I would select a Secretary of Agriculture who shares my commitment to America’s farmers and ranchers, and the importance of developing the rural economy, yet is not afraid to challenge entrenched special interests in Washington.

I believe that consumers have a right to know where their food comes from. For that reason, I support the immediate implementation of the Country of Origin labeling law, which will require meat products to indicate their country of origin.

What’s your favorite dish to bring to a potluck?

Several tomatoes, depending on size, chopped

Sauté onions, green pepper and garlic in olive oil until soft. Add ground meat and brown. Combine spices together into a mixture, then add to ground meat. Add red wine vinegar. Add tomatoes and let simmer, until tomatoes cook down. Add kidney beans and cook for a few more minutes.