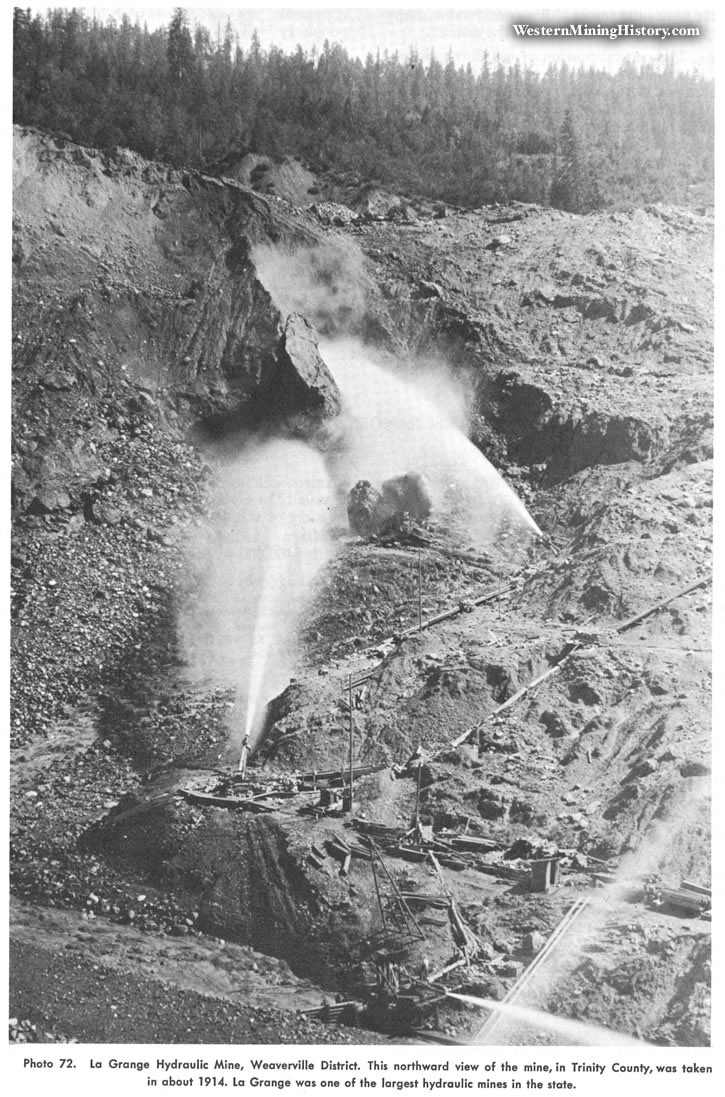 According to his wife Clémentine's memoir, at age 37 Baron Ernest de la Grange needed a midlife challenge after too many sybaritic years managing the family château in northern France. La Grange sailed to New York in 1892 and struck out for the gold fields of northern California, accompanied by Clémentine and their two children. Arriving in Weaverville, La Grange promptly bought the Trinity Gold Mining Company for $250,000, and set out to show the local rubes what "hydraulic mining" was all about. Within six years, the LaGrange Hydraulic Mining Company had become the largest of its kind in the world.

Hydraulic mining, or "hydraulicking," used to be the most popular method for obtaining placer gold in California. In broad terms, gold is found naturally in two forms: lode (primary) and placer (secondary). Lode gold is embedded in veins of quartz or in rock as solid pockets. Placer gold results from the erosion of the original gold-bearing rock, often ending up in stream and river beds, from which the heavy metal can be recovered by panning or sluicing.

Starting with James Wilson Marshall's discovery of gold in the tailrace of Sutter's Mill on Jan. 24, 1848, virtually all the gold found in California in the 1800s was placer gold. However, once the easy pickings in streambeds were exhausted, miners needed an efficient way of extracting placer gold from the surrounding hills.

Give nature enough time, and erosion will bring the toughest mountain to its knees. Gold seekers don't have that much time, and hydraulicking was their solution: to accelerate natural erosion by blasting hillsides with high-pressure jets of water, accomplishing in a few years what takes nature eons. The earliest attempts at hydraulicking were those of sailmaker Anthony Chabot and metalworker Edward Matteson, who created the first "monitor" (think of a really large firehouse nozzle) in the Sierra Nevada goldfields in 1853.

Within a few years, hydraulic mining became the dominant form of gold extraction in northern California -- at terrible environmental cost. According to a Caltrans fact sheet, "Matteson's invention not only changed the mining industry in California, it also brought about one of the greatest environmental disasters of the 19th century." Hydraulic mining resulted in millions of cubic yards of muddy debris pouring into the catchment of the western Sierra Nevada. Settling out in the relatively flat basins of the Sacramento and San Joaquin valleys, the debris caused flooding and the destruction of prime agricultural land. Farmers sued, and the "Sawyer Decision" of 1884 prohibited miners from discharging tailings into the Sacramento River without debris control.

Gold-seekers had known since 1851 that Oregon Mountain, located between Junction City and Weaverville, held large deposits of gold-bearing gravel. Small-scale hydraulicking at Oregon Mountain dates back to the 1870s. The pace picked up following the Sawyer Decision, since the hydraulic mines of the Trinity River basin escaped the ban (there being no large-scale agriculture in the Klamath basin). This was the situation when La Grange bought the Trinity Gold Mining Company in 1992.  Part 2 next week.

Barry Evans (barryevans9@yahoo.com) can't help admiring the scale of the LaGrange venture, perhaps because he is a (retired) civil engineer, even while decrying the environmental damage.