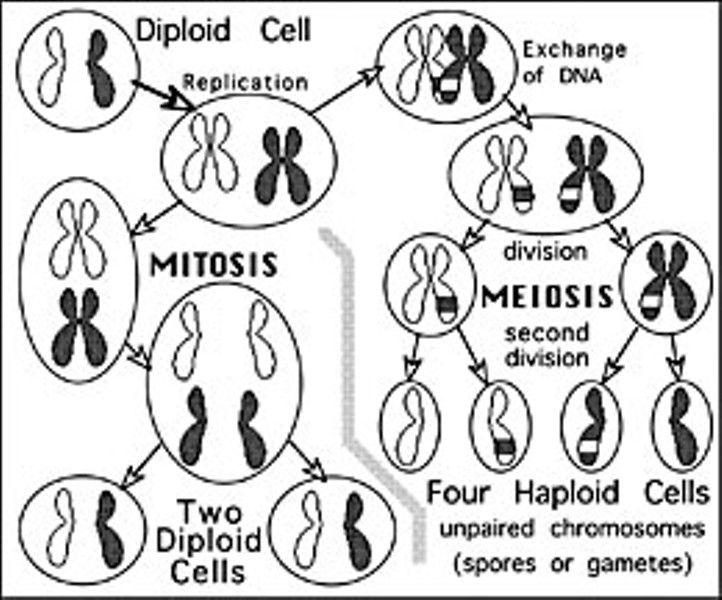 I had intended to write about ferns and their shady lives, but realized that I should first review the fundamentals of reproduction. The diagram shows the basic concepts, under the assumption that each parent provided one chromosome to form a diploid cell with a pair of chromosomes. (Further simplification is my equating cells with nuclei.)

Mitosis is the division of cells for growth. The pale and dark chromosomes each duplicate their DNA to produce two duplicated chromosomes. These are pulled apart to yield the four chromosomes needed for two new cells, each identical to the initial diploid cell.

Meiosis (my-oh-sis) is necessary for sexual reproduction and increases genetic diversity by allowing exchange of DNA between paired chromosomes. By dividing twice after just one duplication event it produces four haploid gametes (such as sperm and eggs) for immediate fertilization, or spores which can grow before eventually producing gametes. Fertilization occurs when two haploid gametes fuse to yield one diploid cell.

Variations on this scheme are endless: Certain female ants have one pair of chromosomes, as in the diagram, but males grow from unfertilized eggs and are thus haploid. One species of fern has 630 pairs of chromosomes*. Choreographing their meiosis keeps God entertained. A woman has two meters of DNA coiled into 23 pairs of chromosomes. The DNA contained in her 10 trillion cells could encircle the Earth 500,000 times. That's enough to boggle any man's mind.