A true amateur trophies at the Homestyle Chili Cook-off 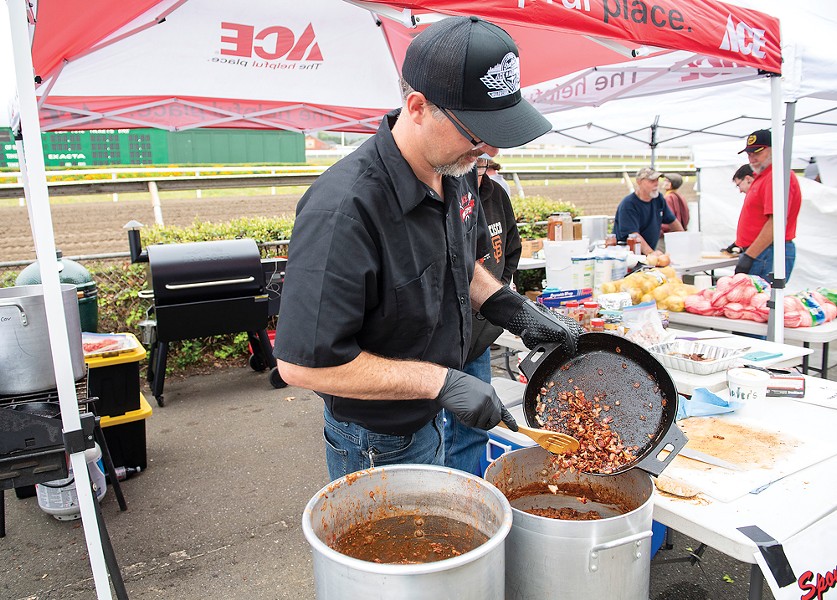 Under the Humboldt County Fair horseracing grandstands, behind an unmarked door flanked by uniformed police, is an ersatz bar with plywood walls. There, under bare fluorescent lights, Guy Fieri puts aside an unlit cigar he's been nursing and briefs a "Last Supper" arrangement of 12 judges on scoring entries for the fair's Homestyle Chili Cook-off benefiting Big Brothers Big Sisters of the North Coast. "There should be no 10s unless this chili is from God," he says.

There are five criteria for the overall scoring of each chili for the Aug. 24 throwdown: smell, thickness, color, flavor and aftertaste. Heat is its own scoring category. One by one, anonymous cardboard quart containers are shuttled to the judges, who range from sponsors to organizers to local government officials to Food Network chefs. [Full disclosure: North Coast Journal Inc. participated in organizing the event and has a marketing contract with the Humboldt County Fair Association.]

Outside, contestants on 16 teams who've been working furiously since they were allowed to light their burners at 11 a.m. — Shamus T Bones, Six Rivers Brewery, Bear River Casino, Bless My Soul and others — ladle samples to attendees and stir their concoctions with Szechuan pepper, roasted chiles, okra, kimchi, pineapple and ingredients they prefer not to disclose. At the Shafer's Ace Hardware tent, Tim Jones, an amateur cook with borrowed equipment, is smoking, chopping and seasoning solo. It's the fifth batch of chili he's ever made.

Jones says his parents, Mike and Susie Jones, were competitive chili makers when he was growing up, and he learned to cook from his mother. "I used to help her in the kitchen and we used to bake cookies. She's the reason I like tasty food." An avid home cook who's barbecued for 100 at church events but is still perfecting his brisket, Tim says for him and his wife, Christa, the dream "maybe when we're older, when everything's paid off, is to run a café."

Jones made his first batch of homemade chili for his family shortly before the cook-off at the Fortuna Rodeo. It got rave reviews from Christa, who encouraged him to enter it in a competition. Despite her not being much of a chili fan, he takes her culinary opinion seriously and for good reason — this year she won three blue ribbons in the fair's pie contest with her chocolate cream, mixed berry and apple pies. "I call her the Pie Goddess," he says, adding they were high school sweethearts. "The only good decision I made in high school."

Unfortunately, Jones discovered he'd just missed the deadline for Fortuna. The county fair was his next shot. His boss Jack Rieke at the Henderson Center Shafer's Ace Hardware store where he works as a manager was already planning to sponsor the event and told Jones if the chili was that good, he'd sponsor entering it in the cook-off. "So, I made a batch and brought it in, and he liked it," says Jones. That was batch No. 3.

Through three batches, Jones was eyeballing the ingredients as he stirred in roasted poblanos and jalapeños, fire-roasted tomatoes, salt, black pepper, cayenne pepper, paprika, chili powder, garlic powder, onion powder, chipotle powder and one secret ingredient (naturally). His "three meat, three beans" chili is deceptively simple. Jones uses equal amounts of black and pinto beans, but half as many of the larger kidney beans to avoid "a whole spoonful of kidney beans." The triumvirate of meats are ground beef, chopped and browned bacon and smoked tri-tip, which gets 35 minutes of smoking until it reaches 165 F and rests. Then he chops the tri-tip, adds it to the bubbling chili, where the meat's collagen can break down. The result is heavy on umami, with tender bites of tri-tip and fully melded, if not particularly fiery, spices. It's also thick enough to stand a spoon, support a hunk of cornbread or top a chili dog without sliding off.

Jones whipped up a fourth practice pot, this time taking measurements and timing his cooking for the contest's four-hour window, which went to the hardware store's staff for rigorous testing. The crew, he says, wanted more, so he was satisfied. Jones gathered his equipment, borrowing a burner and some big pots from his father-in-law, and a fancy Big Green Egg smoker and other equipment from the shop.

Once at the fairgrounds, Jones gets help putting up his tent from the California Conservation Corps team (who would later take home honors for Hottest Chili). He'd hoped Christa would be able to get off work and help but it was not to be, so he's on his own prepping, smoking and simmering 15 gallons of chili in three pots over one burner.

After the judges file out from under the grandstands, the contestants assemble by the stage, where Fieri warms up the crowd before passing out towering red and gold trophies to the winners. Mike Jones has arrived to mind the Ace Hardware tent and the last of his son's chili. He hesitates to say much about it as he isn't the cook. But when Fieri pronounces Tim the Grand Reserve Champion, Mike leaps up and shouts, pumping his fist in the air.

On stage, Fieri marvels at the home cook's one-man operation, asking, "What made the chili so great?"

"Me," answers Jones, to laughter and hollering from the crowd.

Bear River Casino's corn-dotted chili garnished with pork rinds is this year's Overall Winner but Tim Jones isn't salty about it. Coming in second to a professional team this early in his chili-making career, he says, "It blows my mind, too." And batch No. 5 won't be his last now that he's tasted victory.

"I've got the fever," says Jones, "I'm already looking at where the next chili cook-off is."