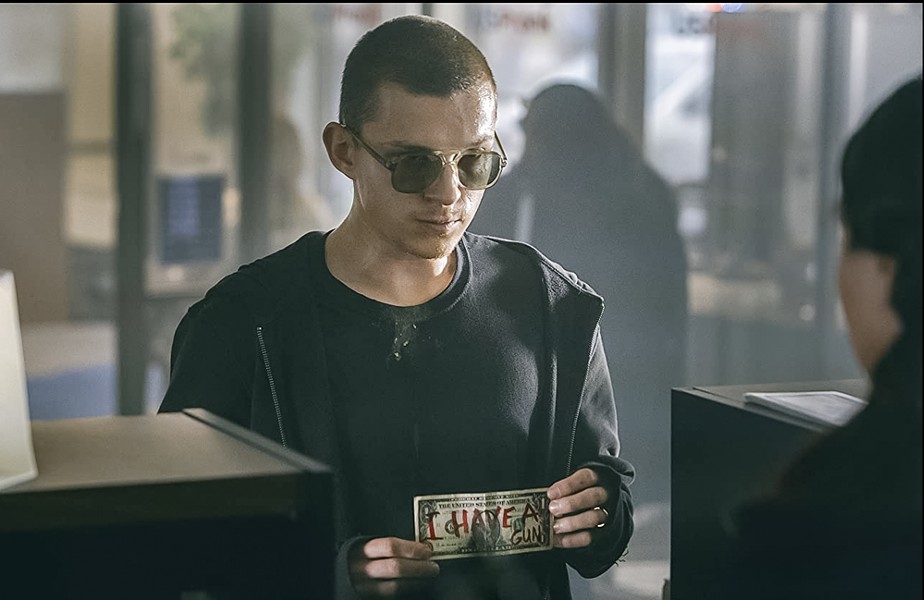 Cherry How I'm using what's left of my stimulus check after bills.

CHERRY. Despite seeming to mostly keep himself to himself, Nico Walker is a pretty prominent media figure these days. He's been profiled, albeit somewhat superficially, by some fancy outlets, married a poet with a splashy lifestyle (Rachel Rabbit White) and has had his first novel adapted into a big, noisy movie by some Avengers guys (Joe and Anthony Russo). All this with incarceration just barely in the rear-view. The novel Cherry has been marketed as semi-autobiographical but, by most accounts, draws directly from the events of Walker's life. I guess better safe than sorry, after the whole James Frey memoir dust-up. Anyway, the book was borne of some internet attention that came Walker's way after his conviction. A publisher reached out to him, sent him books, and encouraged him to read and write. The resulting work, while intermittently compelling, feels more like a product of editing than it did a work of individual vision. Propulsively rough-hewn, it gets the reader down into the dirt of its narrator's life but, for my taste, doesn't do much beyond that. More cynically, I sometimes think of it as a project engineered by opportunistic marketers, a chance to put one's own imprint on the latest and greatest book by a felon ("We haven't had one of those in a while!"). More humanistically, I like to see a writer get a shot at success, and Walker seems to be committed to doing the work and using some of the proceeds of his labors to redress his past crimes. So good on him.

To get back to the point of all this, the brothers Russo optioned Walker's book for a substantial sum. Given their resumes, was surprising when the news began to circulate, not least of all because their sweeping, grandiose style, while appropriate for superhero movies, seemed an awkward fit for a story about a heroin addict. As it turns out, one was not wrong in one's skepticism.

The story is a fairly straightforward one: Boy (Tom Holland) is troubled, as boys often are; boy meets girl (Ciara Bravo), falls in love; girl, fearing love, makes to run away; boy enlists in the Army; girl reconsiders; boy becomes a combat medic and is deeply scarred by his experiences; boy and girl reunite, shortly after which his desperation for relief leads them both into heroin addiction; a series of bad decisions, culminating in robbing banks to finance addiction and attendant choices; conviction; redemption.

To the credit of the author and the directors who chose to adapt the work, Cherry speaks for a generation of veterans who are disproportionately traumatized and under-represented in contemporary art. The problem, though, is in the adaptation. The Russos, abetted by screenwriters Angela Russo-Ostot and Jessica Goldberg — Walker reportedly did not participate in the production, although he does receive an executive producer credit — have filtered the story through their own aesthetic sensibility, rendering a dirty little war story as a would-be Cinemascope epic, complete with (admittedly beautiful) aerial camera work, color-saturation and deep-focus meditations. The technique, while inarguably accomplished, is absolutely wrong for the material; retaining some of the narrative voice of the book and insisting that Holland occasionally recite it directly into camera only accentuates the separation of subject and treatment. R. 141M. APPLE TV+.

MOXIE. Amy Poehler, by any rational standard, has become one of the greats. It's pointless to enumerate her many successes, which are many and, laid end to end, lead to one of the major American comic actors, producers and writers, bar none. My only reservation is that, based on her first feature Wine Country (2019), she may not yet be on the short list of directors. Still, how could I not get on board when she makes a teen dramedy about '90s zine culture tossed, like a hand grenade, into the trench warfare of a contemporary high school?

Entering the 11th grade, Vivian (Hadley Robinson) and her best friend Claudia (Lauren Tsai) plan to stick together, keep their heads down, graduate and hope like hell college is better than high school. But Vivian becomes as inspired by a new classmate's (Alycia Pascual-Peña) refusal to bend to the virulent, oppressive sexism and racism of school culture as she herself has become frustrated by hiding from it. She dives into mom's (Poehler) closet, comes out with a leather jacket, a suitcase full of zines and an appreciation for Bikini Kill, and starts shaking things up. Her newfound (though anonymous) activism begins to distance her from Claudia, awakens an interest in a previously unremarkable boy in her class (Nico Hiraga) and sets off a would-be cultural revolution.

Moxie teeters a little, tonally, hesitating between a desire (which I share) for some grand meting out of justice and an perhaps misbegotten need to hew to a "reality" not entirely supported by the rest of the movie. Still, it approaches the material with a sense of honesty and inclusion, while still serving the impossible contradictions of teen life. It's flawed, sure, but it is also genuine and, without hyperbole, important. PG13. 111M. NETFLIX.