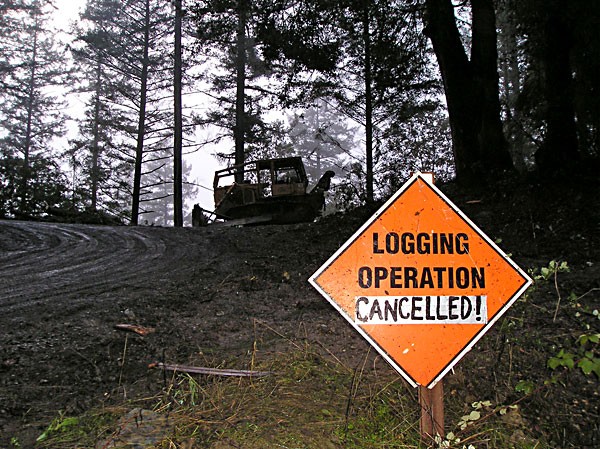 When the logger from Mark Crawford Logging showed up at the dirt Forest Service spur off Red Cap Road in Orleans at 6:30 a.m. last Wednesday, he encountered the unwelcoming party.

They'd been waiting for him since 4 a.m. -- an "ad hoc group of Klamath Basin residents from all walks of life ... Indians, non-natives, mothers, fathers, workers, hippies, youth, and elders," as the news release they sent out later that day declared.

They called themselves the Klamath Justice Coalition. They'd chainsawed up the slash pile left by the logging crew and used it to build a thin fire across the road. They'd parked their vehicles in another line across the road. And then they'd arranged themselves into a third, human body line of defense across the road, near the fire. And they'd hung out drinking coffee until he showed up.

"He said, 'Well, I'm going to go up and get two loads. That's all. Just two loads,'" recalled Chook-Chook Hillman, who helped organize the blockade, later that day. "And we said, 'No, you're not.' And he said, 'Well, it looks like I'm not going to work today. I've got some phone calls to make.' And he left. He was nice about it."

Afterward, the coalition lobbed its news release, and Karuk Tribe spokesman Craig Tucker sent out one as well. They said the tribe, the Orleans/Somes Bar Fire Safe Council and other community groups, along with several environmental organizations, had just slogged through a three-year collaboration process with Six Rivers National Forest, under the Healthy Forest Restoration Act. They'd finally crafted the Orleans Community Fuels Reduction (OCFR) plan, which would reduce fire hazards on 2,700 acres of the Orleans District, allow commercial logging on about a thousand of those and enhance Karuk cultural sites in the Panamnik World Renewal Ceremonial District.

But now, they said, the Forest Service had blown it.

The charges: The logging company wasn't following the agreed-upon guidelines for protecting cultural sites in the district -- in fact, those guidelines hadn't even made it into the contract, which the tribe would have known if it had a chance to see the thing before it went out to bid, they said. They said the company was taking out bigger fir trees and deliberately damaging more hardwoods in order to sell them as firewood. They said inappropriate equipment was being used in delicate areas. And they said the multi-party monitoring the tribe wanted hadn't taken place.

Ancient spiritual trails, which Karuk medicine men still take from the river to the mountains during the World Renewal ceremony, had been impacted: A bulldozer had been driven across one of the trails, and logs had been decked too close to it, said Bill Tripp, eco-cultural resources specialist for the Karuk.

"It probably sounds petty to them," Chook-Chook Hillman said. "Because we're like, 'Hey you, you have your equipment parked in the medicine man trail.' And, 'Oh, you just damaged five trees on the trail.' I just don't think that they quite understand what that means. And they probably think, 'Oh Jesus, it's just a trail.' But it turns out, the medicine man can't be thinking any bad thoughts when he goes through that place. And so a scarred-up tree, a ripped-out tree -- it's important, and it does mean something. But [the Forest Service] doesn't understand it and they never have since they've gotten into our country."

Cade Crawford, of subcontractor Mark Crawford Logging, said last week that his crew was just following the contract signed between the Forest and the head contractor, Yreka Timber Products.

"And I went out of my way to protect their trail," he said.

He said he restacked the offending logs twice to try to please the tribe, and that he was going out of his way to protect the hardwoods. He wasn't selling them, he said, although he and his dad bought some for firewood. He said they did end up using a yarder anchored to trees -- not agreed upon in the plan and final environmental impact statement -- to get to harder-to-reach trees. But the contract wasn't specific.

"Maybe you should mention that they sabotaged our equipment," Crawford said, angrily. "Two weeks before Thanksgiving, on the job site, they stole an ax out of my shop truck and they chopped the hydraulic line on the yarder and they put a hole in the radiator. It leaked hydraulic oil and antifreeze all over the forest floor. So you tell me who's taking care of the forest?"

But the tribe and Orleans community don't blame the contractor.

"They lay much of the blame directly at the feet of Six Rivers National Forest Supervisor Tyrone Kelley," said Karuk spokesman Tucker. He noted the community's displeasure with how Kelley handled the fires two summers ago, and how his office handled the court-ordered eviction of a tribal member from Forest Service land that the tribe claimed was an old Indian allotment.

Late last week, Supervisor Kelley said he'd met with the tribe and members of the coalition that Monday and they'd agreed to work out a multi-party monitoring plan. After the blockade on Wednesday, he sent out a news release admitting that some of the specific language in the FEIS and OCFR plan regarding treatment in sensitive areas somehow "didn't make it into the contract."

He later said that he had, in fact, sent out a Web link to the contract earlier, but the collaborative member who got it didn't forward it to the others.

He agreed that some bad things had happened on his watch -- although, the eviction mentioned above, he said, was the result of a 25-year court case.

"There have been a ton of other things that we've done together that have been good," Kelley said. He said he planned to meet with the Karuk tribal government at their earliest convenience.