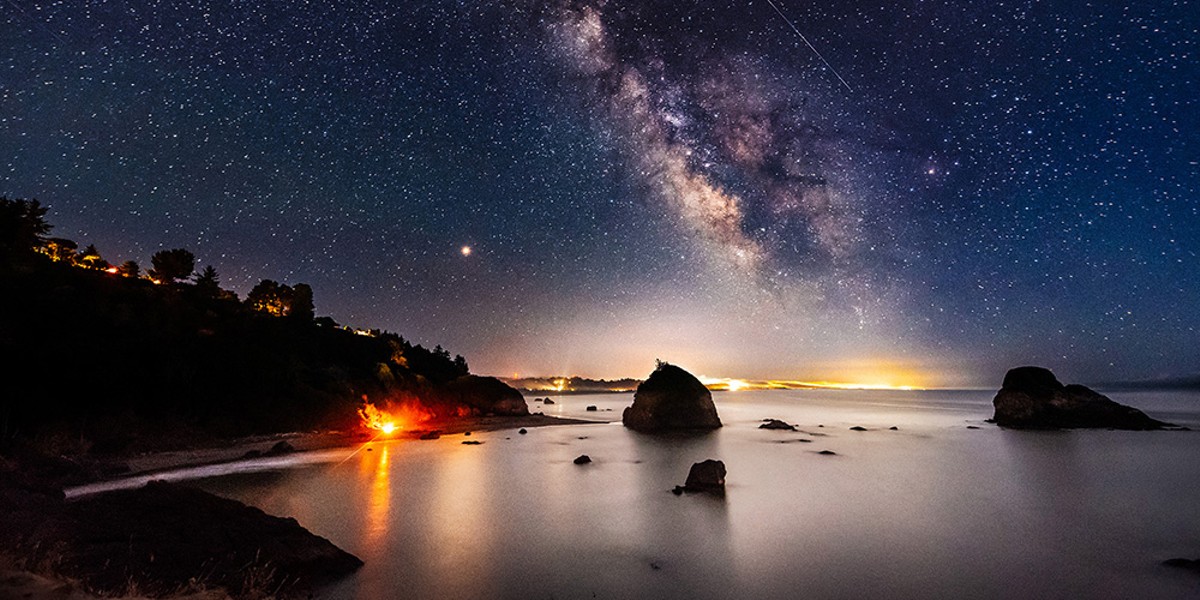 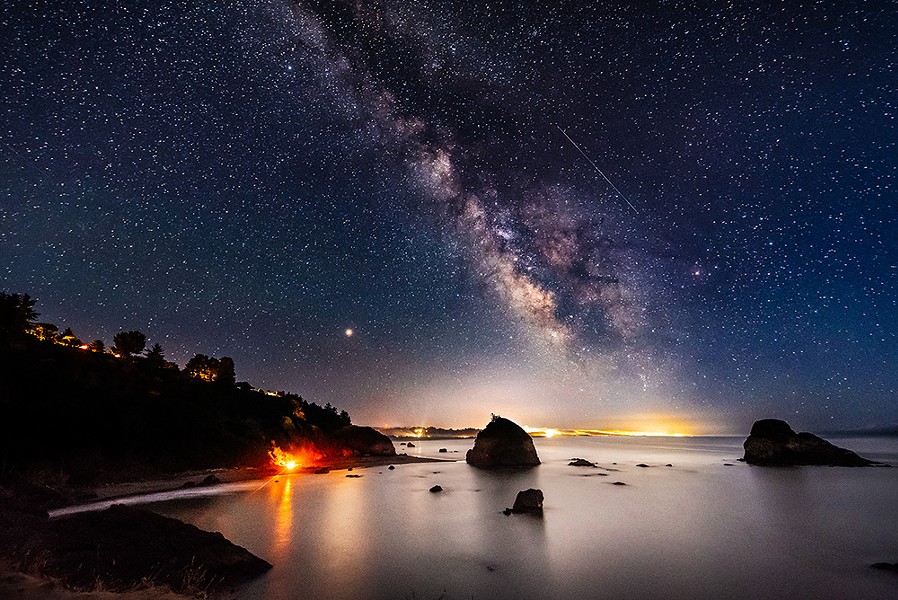 Photo by David Wilson Looking south from Tepona Point on the night of Aug. 11, 2018. 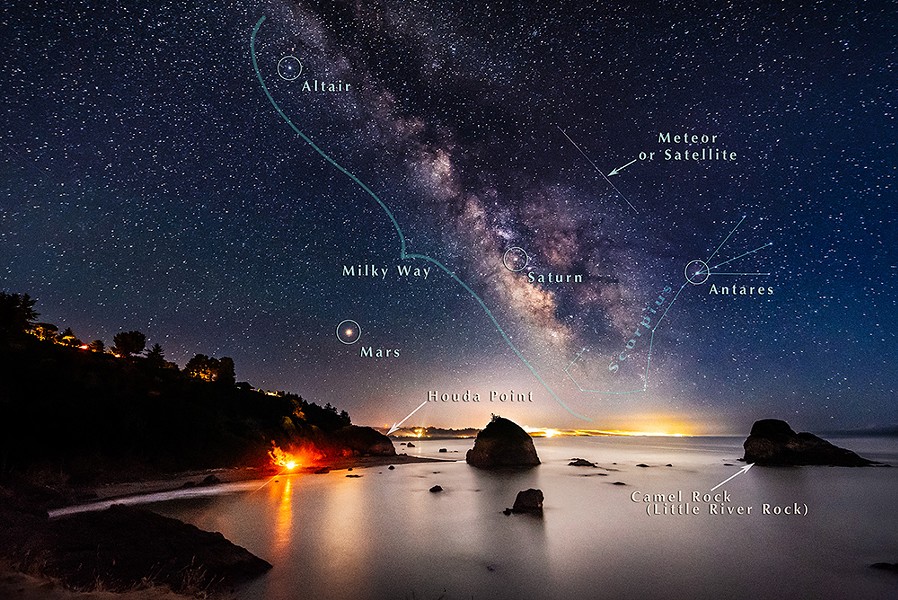 Photo by David Wilson The annotated version. Mars was the brightest object in the sky, the Red Planet casting a reflection on the water bright enough for our naked eyes to see. The "meteor" might have been a satellite. We'll call it "unidentified."

Photo by David Wilson Tepona Point during the day.

In early to mid-August each year, the remnants of comet Swift-Tuttle's passage rain down through our atmosphere in a spectacular show called the Perseid meteor shower. During its peak this year, my brother and I set out to Tepona Point, along Scenic Drive south of Trinidad, hopeful of capturing some of the terrestrial beauty of the North Coast beneath Perseid meteors and the celestial wonders of our night sky. Mars, Saturn and Jupiter were with us above, and arcing across everything was the Milky Way.

We were treated early to a gorgeous night, though it had been mostly overcast during the prior week. At night, the steep stairs and slim trail out to the tip of the point felt extremely narrow, particularly with darkness falling away on either side to the crashing surf far below. It would be a terrible time for an earthquake, I thought, as we negotiated the narrows. When we finally stood at the tip of the jutting outcrop of Tepona Point, the Pacific Ocean pounded on the rocks on three sides of us.

In one of those frequent gifts from the photo gods I am eternally grateful for, the bonfire of a group of Perseid meteor gazers blazed on the curve of Houda Point Beach, a beautifully warm counterpoint to the stars and planets above. Mars, the brightest point in the sky, appears just to the left of the Milky Way. You can see its reflection on the water in this photograph, spread wide by the rolling waves. We saw it with our naked eyes as well, though not with the clarity seen in this 30-second exposure. I'm sorry to say that Jupiter is out of view to the right. Wide as my lens was at 14mm, it couldn't catch both Jupiter and the sweep of the shoreline.

Though the waves rolled and broke as they normally would, the ocean appears completely smooth in the photograph. This is because the 30-second exposure I used allowed the wave motion to average out to the silky surface you see here, an example of the camera seeing the world differently in low light from the way we see it. Our eyes could only dimly see the waves below, lively with the incoming tide.

We experienced several good meteors but the one in the accompanying image is the longest one I caught with the camera. We also spotted satellites, and the camera does pick them up. In fact, they can closely resemble meteors in a photograph, both appearing as streaks. Meteor streaks are often tapered, though, and this one is not. Additionally, a colleague at College of the Redwoods who teaches astronomy suggested that the way it fades in and out regularly, which you'll note if you look closely, could indicate a satellite revolving around its axis, giving us a brightness that changes as its surfaces change orientation. Sounds reasonable to me. But we will never know for certain and since this streak could be either, technically I will have to classify this flying object as unidentified — and you know what that means.

Each night of the year the night side of our planet faces a slightly new direction into space, changing gradually night by night as Earth travels around the sun, until a year from now, when Earth will be in the same position in its orbit around the sun as it is tonight, our night side will have rotated past a full 360 degrees and will again show us the same sky that we see tonight. The exception is the planets, which change position in the sky as they follow their own paths due to their independent orbits.

We are now nearing the end of what people call the Milky Way season, called so for the Milky Way's prominence early in the night sky. Whether it is visible in the night sky, and where, depends on where we are in Earth's orbit around our sun. When I photographed this, Earth was situated so that immediately after dark we could see the best part of the Milky Way, that densest area around the galactic core.

The Galactic Core (I like to think of it in capitals) is an arbitrary region near the center of our spiral galaxy, which is shaped like a flattened pinwheel. We are on one of the arms of the pinwheel, looking edge-wise through the galaxy, so that the core appears especially dense. The rest of the milkiness of the Milky Way that we see is the region to either side of the core area. We see it as a milky lightness — a milky path, or way, through the sky — because we are looking through a great deal of stars, gas clouds, nebulae and whatever else (I'm not an astronomer), most of which is too distant to see with any distinctness by our naked eyes.

Tepona Point is part of Luffenholtz Park, situated on Scenic Drive between Moonstone Beach to the south and Trinidad to the north, closer to the Moonstone end. You can reach it from either direction right now, though the road is quite rough coming in from Trinidad in the north and in the winter it is often completely impassible from that direction. Access to it from the south is usually open all year.

To keep abreast of David Wilson's most current photography or peer into its past, follow him on Instagram at @david_wilson_mfx or his website mindscapefx.com, which Wilson says he updates less frequently.