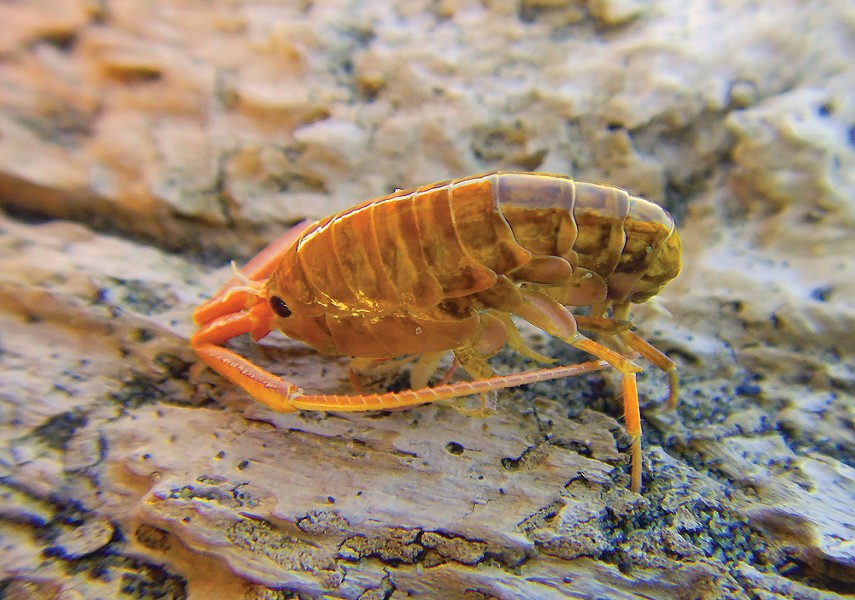 Photo by Mike Kelly A Megalorchestia minor amphipod in washed up kelp.

A couple of characters approached me at my favorite beach. They were dressed in pinstripe suits and wore fedoras. The small guy said, "Hey buddy. Nice beach you got here. It would be a shame if something bad happened to it." The much larger guy cracked his knuckles affirmatively.

"Oh, you know, some unscrupulous types might — I dunno — spill some oil maybe. Get your cute little beach fleas covered in goo. .... But me and my associate here would be honored to prevent such a tragedy for a modest investment in our enterprise."

I was onto their protection racket. But I gave the little guy 100 bucks and it seemed wise to tip his associate a 20.

Of course, what the mobsters call "beach fleas" are not actual fleas. They're superficially shaped like fleas and they hop like fleas, but they aren't even insects. They are a type of crustacean within a large and diverse order called Amphipoda.

The mobsters may have been referring to the California beach hopper (Megalorchestia californiana) because it has conspicuous long, orange antennae and a large body size of up to an inch or more. However, California beach hoppers are mainly active at night and they burrow into the sand high above the tide during the day. In fact, even though they look like aquatic animals — which most amphipods are — they will drown without access to air. Supposedly, the adults will fight each other to take over an existing burrow. And females brood their eggs, which are blue, inside a burrow.

But there's another local member of this amphipod genus called Megalorchestia minor, which is abundant and commonly active during daytime. So, these smaller puffed-rice-sized beach hoppers may be the inspiration for the mobsters' silly threats. This beach hopper is gray to tan and matches well with the color of the sand. It also has a distinctive pattern of bars and butterfly shapes down its back. But it is still so uncharismatic that no one has bothered to give it a common name. So, I'm calling it the kiss-my-ass-you-dirty-mobsters beach hopper.

Animals that are very common like this, even if they seem unremarkable, are often very important members of their communities. It's pretty obvious from watching these beach hoppers that they are responsible for a lot of the decomposition of washed-up organic material other animals don't seem to want.

For example, if you lift a wad of washed-up seaweed, you may see hundreds of beach hoppers bounding away, leaving little dimples in the sand with each hop. And I've seen a mass of them feasting on the flesh of a dead fish and leaving behind a perfect skeleton. In turn, shorebirds gobble up the beach hoppers and then peregrine falcons prey on the shorebirds. So, beach hoppers help convert dead algae into falcons. It would definitely be a bummer to lose the beach hoppers.

I thought I was done with this story, but I just arrived at the beach and there's a crippled oil tanker drifting toward the surf. Coast Guard helicopter teams are rescuing the tanker's crew, but — what's that coming out of the fog? It's an enormous tugboat! It's named Beach Flea and it's being piloted by a little guy in a fedora.

The powerful tug is slowing the ship's shoreward drift. A big guy in a fedora just climbed from the tug onto the tanker with a huge wrench clenched in his teeth. He's disappeared down below — look! Now the tanker's stacks are blowing fresh smoke and it's escaping doom under its own power.