Beautiful Music in a Cruel World 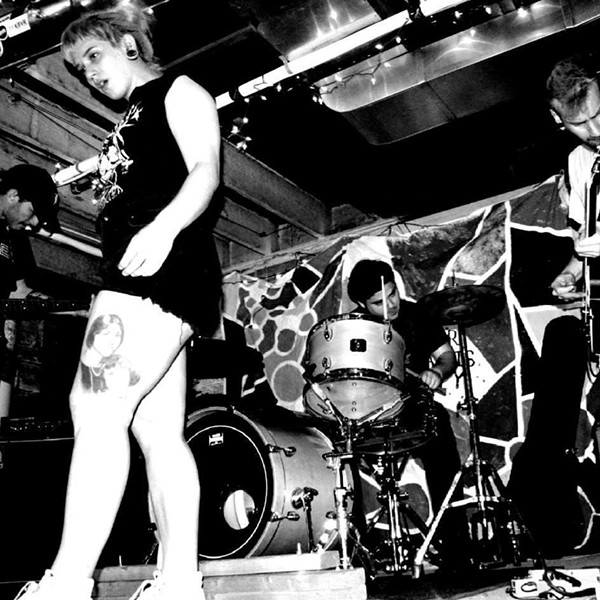 Photo by Panda Damian, submitted Insects on the Bough play the Outer Space at 7 p.m. on Saturday, Aug. 17.

Last week was marked by two high-profile deaths. The tragic suicide of troubled songwriter, poet and Silver Jews frontman David Berman, and the there's-no-fucking-way-that-I-will-ever-believe-that-was-a-suicide demise of professional scumbag and alleged child pimp Jeffrey Epstein. And though both of these events happened in New York City, they are worlds apart: The latter has me watching with abjection as the waters of American amnesia pour over a vision of hell like they did with the revelation of the Panama Papers, while the former makes me genuinely sad. This can be a cruel world and no less so for those who document its meanness with the language of the heart and the blood of the soul. Do yourself a favor and check out Mr. Berman's work in the Silver Jews' discography — I recommend starting with American Water for the uninitiated — and make time for the sadder scribes in your own life. Listen to their stories and enjoy their songs because who knows what tomorrow can bring and what outcomes you can change.

Have a beautiful week.

The Outer Space is earning its name by hosting a wild and trippy space jam tonight at 7 p.m. ($7-$20 sliding scale). Oakland's Meerna is a synth-y noise master-act with a sound that lives in the sweet intersection of Analog Street and Electric Avenue, while Mouth Painter from Portland is a weird folk trio full of vocal harmonies, flute, guitar, pedal steel and a singing saw. Between them lies the aesthetic domain of Marty, aka mister moonbeam, a one-man band and three-eyed Roy Rogers. Also on board is San(s) Kazakgascar Solo, Sacramento's Jed Brewer on a band-less death trip into the non-canonical visions of John of Patmos via a litany of drone strings and Middle Eastern scale patterns.

In my mission to report on open mics around the county, I am happy to open your minds to one in the wooded hinterlands between Moonstone Beach and Trinidad. Artist-in-residence Bryan Radzin hosts it at the Westhaven Center for the Performing Arts at 6 p.m. ($2-$5 sliding scale). Bring your snippets of song, pats of poetry and stinky riffs to the intimate stage.

Whew, this is a busy one, so let's not delay. First off, come down to the Creamery a 3 p.m. for day two of the long-weekend Creamery Festival. Today's courtyard shows will include epic sets from local gems Sue and the Namis, Blood Hunny and Oyster Baes. If there's anything better than a musical daydream amid the shops and in the shadow of the beautiful and severe structure that I called "the Batman Building" as a kid, I don't know it.

When the music's over you can walk a few blocks away to the Outer Space where you will find a heavy show at 7 p.m. featuring Portland's political post-punk band Flexing. Also on the bill is Arcata's noise rock act Firstwife, as well as banjo-driven folk-punk band Insects on the Bough ($5-$20 sliding scale).

Finally, tonight at the Siren's Song you can enjoy a diverse-yet-sympatico line-up of high plains drifters Mojave Green and swamp cat gut yowlers Bow-Legged Buzzards as they pound and saw their way through respectively wild sets. The fun starts at 9 p.m., giving you plenty of time to trek across the bay (price TBA).

It's finally here, the long-awaited Lawnstock 2019 is popping off at Perigot Park in Blue Lake. The all-day event starts at 11 a.m., and the line-up is a proper who's-who of local talent: Ghost Train, Dynasty One, Wild Abandon and The Gatehouse Well are among the many groups on display today. The whole shindig is a benefit for Ty-Ty Holt, a young Humboldt lad who has been stricken with a tumor on his brain stem — dreadful to consider at any age. The suggested donation is $15, but this writer would appeal to the generous people of our community to dig deep and help this brave kid out as much as you can. I'm sure his family will appreciate it.

The Miniplex has a showcase of that good, uncut, pure and hip sound for all of you noise tasters out there. The East Coast uber-cool drone duo of Marcia Bassett from Double Leopards and ZaÏmph, and violinist Samara Lubelski will pin you down with the laser focus of great droning majesty in record time. Kaori Suzuki and John Krausbauer from Oakland's psych group Night Collectors are here on a mission of tape loops, layers and squeals. Local pedal chain enthusiast Brian Pyle will represent the discography of his musical avatar Ensemble Economique. 9 p.m. ($5).

Along with open mics, I've also decided to make a mission of pushing various local trivia nights, which, although not live music per se, are certainly music-adjacent inasmuch as there will certainly be pop music references in the questions. Tonight's 9 p.m. trivia night is free at the Savage Henry Comedy Club, where you can participate in a team of up to three to fight for the prize of "most useless information stored in your brain-meats."

Austin, Texas' Origami Ghosts returns to Eureka on a larger West Coast tour which finds it on the stage of Siren's Song tonight at 8 p.m. Joining this band of strange folk will be Blood Hunny and a live music/shadow puppet mash-up by Welcome to Boobeeboo Island. This show is free, free, free.

Collin Yeo is serious here, the ultra- powerful really just got away with some evil shit this week. He thinks that we should all take notes and look into that. He lives in Arcata.