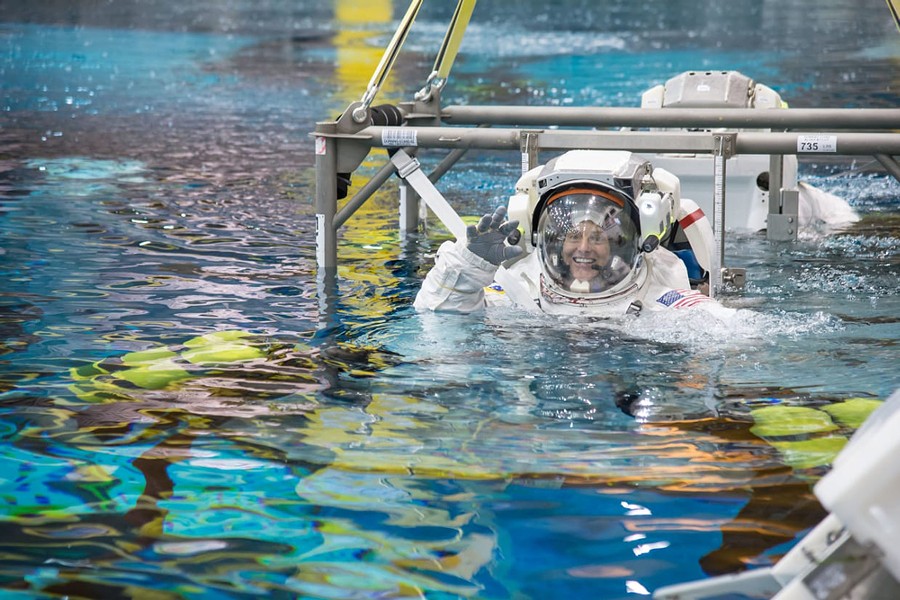 NASA NASA astronaut Nicole Mann is lowered into the Neutral Buoyancy Laboratory during a spacewalk training session in 2014.

NASA Nicole Mann, of Wailaki descent, is poised to become the first Native woman in space when she launches to the International Space Station as a part of NASA's SpaceX Crew-5 mission next month.

Nicole Aunapu Mann will be making history as the first Native woman to fly into space this fall.

Mann, enrolled in Wailacki of the Round Valley Indian Tribes in northern California, will be aboard the SpaceX Crew-5 mission to go to the International Space Station no earlier than Sept. 29. (The Wailacki's ancestral territory lies along the Eel River east of that of the Sinkiyone people, and southeast of those of the Mattole and Wiyot.)

"It's very exciting," she told Indian Country Today, referring to being the first Native woman in space. "I think it›s important that we communicate this to our community, so that other Native kids, if they thought maybe that this was not a possibility or to realize that some of those barriers that used to be there are really starting to get broken down."

This is NASA's fifth crew rotation flight as part of the agency's Commercial Crew Program. As mission commander on the SpaceX spacecraft called Dragon, Mann is leading all phases of the flight from launch at NASA's Kennedy Space Center in Florida to re-entering the Earth's atmosphere. She will also serve as the Expedition 68 flight engineer on the space station.

The crew will live on board for six months to complete their mission of conducting approximately 250 scientific experiments in the space station that is "a floating laboratory," said Mann, a colonel in the U.S. Marine Corps.

Besides the other crew members, Mann will also be accompanied by personal items in her personal preference kit. The Dragon spacecraft allows 3.3 pounds for personal items.

"I have some special gifts for my family, which I can't say because they're a surprise. Definitely taking my wedding rings, and I have this dream catcher that my mother gave me when I was very young," she said. "It's kind of always stayed with me throughout my time."

This is the 45-year-old's first spaceflight and she looks forward to the science on board that will benefit the human race.

"One of the ones that I'm looking most forward to is called the biofabrication facility. And it is literally 3D printing human cells, which to me sounds so futuristic, right?" she said.

The force of gravity makes printing and growing cells on Earth difficult. That is a different story in space with "a much more intact structure of the cell," she said.

"We're not there yet. However, we have successfully printed some heart cells, as well as part of the meniscus of a knee. And so this facility has flown, and then come and printed cells and then come back to Earth," she said. "They made changes, they learned it flew again, came back to Earth, they made changes, and they're about to fly it again. So that'll be our chance to participate."

Of course, she hopes to do a spacewalk or two since she trained a lot for that. That was probably the most challenging but enjoyable part of her astronaut training experience.

"So they put you in a spacesuit, just like you would be in space, and they blow up like a balloon," Mann said.

"And that's what it's like when you go out the door in vacuum, then they put you in this huge pool to simulate microgravity, and use a team of divers and weights and foam," she said.

A mockup of the space station, or most components of it, lies inside this huge pool where the astronauts crawl around in "this kind of like scuba diving, kinda like a jungle gym" making modifications on the space station.

"But each time you move, you're working against the pressure of that suit, of that 4.3 psi. So it's like a marathon. The training run is six hours long, you're physically exhausted, you're mentally exhausted," Mann said. "You're done at the end of one of these runs, but everybody says it is the most realistic training for doing a spacewalk in space. And being under the water and climbing along the space station and doing these tasks. It is incredible. It is some of the coolest training I think that we do. And hopefully I'll have an opportunity to do that in space for real."

Becoming an astronaut didn't occur to Mann as a kid. Years later, she says with a laugh, "Why would you not want to become an astronaut?"

"It was a little bit later on in life actually that I realized that being an astronaut was an opportunity and something that I could do," she said. "To be honest, I didn't understand when I was younger what astronauts actually did."

Mann graduated from Rancho Cotate High School in Rohnert Park, California, in 1995. She obtained a bachelor's of science degree in mechanical engineering in 1999 from the U.S. Naval Academy in Annapolis, Maryland. In 1999, she was also commissioned as a second lieutenant in the U.S. Marine Corps.

She realized she could be a fighter pilot and a Marine simultaneously while riding in a F/A 18, a fighter and attack aircraft, in the summer before her senior year at the naval academy.

After earning a master's degree in mechanical engineering from Stanford University in 2001, she went to the U.S. Naval Test Pilot School. Mann has more than 2,500 hours in 25 different aircrafts, 200 carrier arrestments and 47 combat missions in Afghanistan and Iraq under her belt.

During test pilot school, she started looking at options for what to do next. Becoming an astronaut fell on the list.

She applied to the 21st astronaut class. Mann was selected with seven others in the 2013 cohort out of more than 6,100 applicants. At that time, it was the second largest number of applicants NASA had received. She was 35 and a major in the Marine Corps when selected.

To the moon and beyond

Little by little NASA is working its way to deep space exploration. The SpaceX Crew-5 mission is only the beginning for Mann.

"This is a huge part of our larger mission under Artemis to go to the moon and eventually to Mars," she said at an Aug. 4 NASA press conference. "So what we are going to do in low Earth orbit is a stepping stone to achieving those goals of exploration into deep space, the technology development, the research that will do some of the operations that will learn to develop and work with the ground, understanding how we're going to do that from a further distance where we don't have the accessibility of the ground so often."

In December of 2020, NASA announced Mann as part of the initial 18-member Artemis Team to return to the moon.

"There is so much exciting work ahead of us as we return to the moon, and it will take the entire astronaut corps to make that happen," said Chief Astronaut Pat Forrester in a 2020 press release. "Walking on the lunar surface would be a dream come true for any one of us, and any part we can play in making that happen is an honor. I am proud of this particular group of men and women and know that any of them would do an outstanding job representing NASA and the United States on a future Artemis mission."

The Artemis mission plans to send two of the 18 astronauts to land on the lunar surface, the first woman and first person of color. If Mann is selected, she would be the first woman (and Native person) to step on the moon.

"It's just this really overwhelming sense of emotion in the best of ways that I can describe," she told Inverse, if she is the first woman. "Yes, you want to be the first person to walk on the moon, you want to fulfill that role, but really it's not about you. ... It's about the bigger mission, so you're just excited to support in whatever role you can."

The Artemis-III crewed mission hopes to land on the south pole of the moon's surface in 2025. A change from the original and unfeasible 2024 moon landing that was pushed by the Trump administration.

"Returning to the moon as quickly and safely as possible is an agency priority. However, with the recent lawsuit and other factors, the first human landing under Artemis is likely no earlier than 2025," said NASA Administrator Bill Nelson in 2021.

Other Natives who have been to space or sent projects to the cosmos: John Herrington and Aaron Yazzie. Herrington, Chickasaw, was the first Native astronaut to travel into space. The Navy veteran spent 14 days on the space station. Yazzie is a Diné mechanical engineer at NASA's Jet Propulsion Laboratory in California. He has contributed to four Mars projects in his time with the agency.

While the history books write Mann's story, the Native astronaut will continue to train and prepare intensively for her mission in a couple of months.

"We're going to gain a ton of experience in flying low earth orbit, and any of us could be assigned to an Artemis mission in the future," she said. "And hopefully, we'll walk on the moon together one day."

This story was first published by Indian Country Today.