Channing Tatum’s stripper saga is one of the best movies of the year. Yes, really. 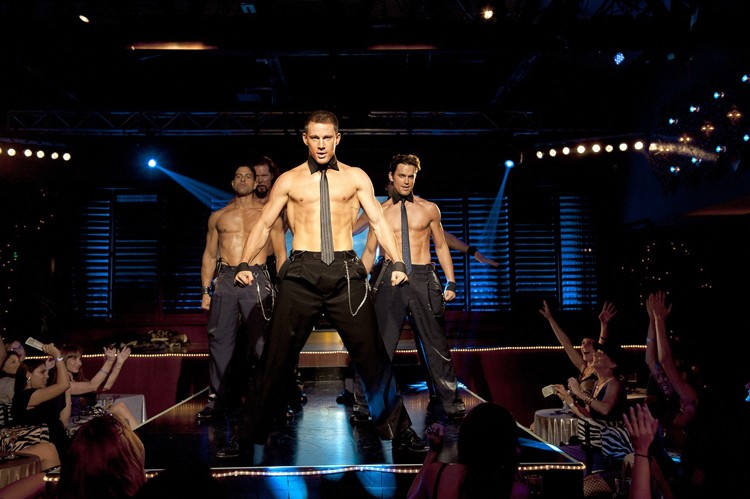 MAGIC MIKE. For better or worse, most of the audience didn't know or care that this is a Steven Soderbergh movie. They came to see Channing Tatum get naked and were very excited when he did so. Fortunately they didn't have to wait long, so they got most of the giggling and screaming out of their systems at the beginning. I say fortunately because this allowed the rest of us to actually appreciate one of the great movies of 2012.

Tatum leaves it all on the stage as Magic Mike, a stripper with a dream: He wants to start a custom furniture business, and he hustles day and night saving money to do it. Mike grinds it out at night and by day he runs a mobile auto detailing business, a roofing company and a few other unseen businesses. He's also in line to become part owner of the strip club when it makes the big jump from Tampa to Miami. Life gets in the way when he takes The Kid (Alex Pettyfer) under his wing and falls for The Kid's sister.

Magic Mike is beautifully photographed and edited, scored with exciting music and filled with thought-provoking performances. Everybody who goes just for the stripping will leave better for it. R. 110m.

TED. Seth McFarlane often comes off as a pompous ass. His characterizations of "average" Americans can simultaneously seem like pandering and condescension. That being said, I have to admit that his work to this point (Family Guy, especially) is creative and usually very funny. Now I'll add success as a moviemaker to his list of accomplishments.

Ted won't shock with its coarse language and pothead slacker main characters -- I think we're all expecting that much -- but it might surprise a few people with its themes of friendship and growing up, its honest storytelling and its inventiveness.

This is the story of an unpopular Boston boy -- disconcertingly named John Bennett -- played by Mark Wahlberg. He wishes his beloved plush bear into sentience, and Ted (voiced by McFarlane) subsequently enjoys some brief fame. Cut to 25 years later: John and Ted are stuck in a rut, filling their days with bong hits and re-watching Flash Gordon. John's inexplicably attractive, successful girlfriend (Mila Kunis) wants Ted to strike out on his own so she and John can move forward with their relationship. It's gut-check time for the two old friends. As an added complication, a super-creepy father and son have designs on Ted.

I laughed quite a bit at Ted, more than I expected to. Its tone and execution are simple but effective, and McFarlane as director doesn't overreach stylistically. The story is told in his voice, and the final product is commendable. R. 106m.

PEOPLE LIKE US. Alex Kurtzman has a long list of credits to his name, mostly as a television writer and producer (Alias, Fringe, Hawaii Five-O). This movie marks his big-screen directorial debut, and his experience and competence distinguish it from the standard family melodramas that share its DNA. A charming cast including Chris Pine, Elizabeth Banks and film newcomer Michael Hall D'Addario doesn't hurt either.

Sam (Pine) is a fast-talking corporate barter specialist in a make-or-break professional situation. Meanwhile, his distant, philandering record-biz father has died, leaving behind some unfinished business, namely Frankie (Banks), a half-sister Sam never knew he had, her troubled young son Josh (D'Addario) and $150,000 cash in a shaving kit. Tasked with delivering the money to his newfound family members, Sam suffers a crisis of conscience. He could use the cash to stave off an FTC investigation, or do what his late father asks of him.

The narrative contains few surprises, but Kurtzman tells the story well and focuses his energies efficiently. The actors all contribute strong, believable performances, and there are enough unique details to the story to elevate it above run of the mill. People Like Us, while unremarkable, is heartwarming and well-made. PG13. 115m.

MOONRISE KINGDOM. Detractors call the latest Wes Anderson movie indulgent and twee. Fans celebrate it as the purest distillate of the director's particular vision. I am decidedly a fan -- have been since a friend hipped me to Bottle Rocket in 1998 -- so I'm inclined to celebrate Anderson's adherence to the motifs and devices that define his moviemaking. At the same time I understand what the haters are complaining about.

I've waited a long time for the opportunity to see Moonrise Kingdom and was excited that it finally made it here. That excitement was tempered by mild disappointment when I learned that it would only be shown on one of the Minor's smaller screens. (I love the Minor as much as anybody, but the sound and picture quality leave something to be desired.)  It seems like a no-brainer to put this out in a bigger theater, if not on multiple screens. The fact that it played to a packed house when I attended seems to support this theory.

Besides seating, sound and picture, the Minor has a major flaw: It tends to attract more asshole drunks than our other local theaters -- like the group that sat in the front row on Friday evening and talked through the first hour, until they were gently ejected by a Minor employee. I applaud that guy, but the damage was done. I'll have to see the movie again -- and actually watch it -- before I can offer any thoughtful, honest commentary. PG13. 94m.

KATY PERRY: PART OF ME. But which part? Starting Thursday, this behind-the-scenes documentary takes you backstage with the bubbly tween pop idol, who split with British funnyman Russell Brand during production. See the drama and the Sesame Street-scandalizing décolletage in 3D! PG. 95m.

ABRAHAM LINCOLN, VAMPIRE HUNTER. Imagine if our 16th president hunted vampires before freeing the slaves. Can you picture it? There, I just saved you from having to see this slapdash mess of a movie. R. 105m.

SEEKING A FRIEND FOR THE END OF THE WORLD. An earthbound asteroid really puts that midlife crisis in perspective. This winning apocalyptic road-trip comedy stars Steve Carell and Kiera Knightly. R. 100m.

SNOW WHITE AND THE HUNTSMAN. Visually stylish adaptation of the Brothers Grimm tale suffers from an underdeveloped plot and fake dwarfs. PG13. 127m.