The wood art of Zachary Shea 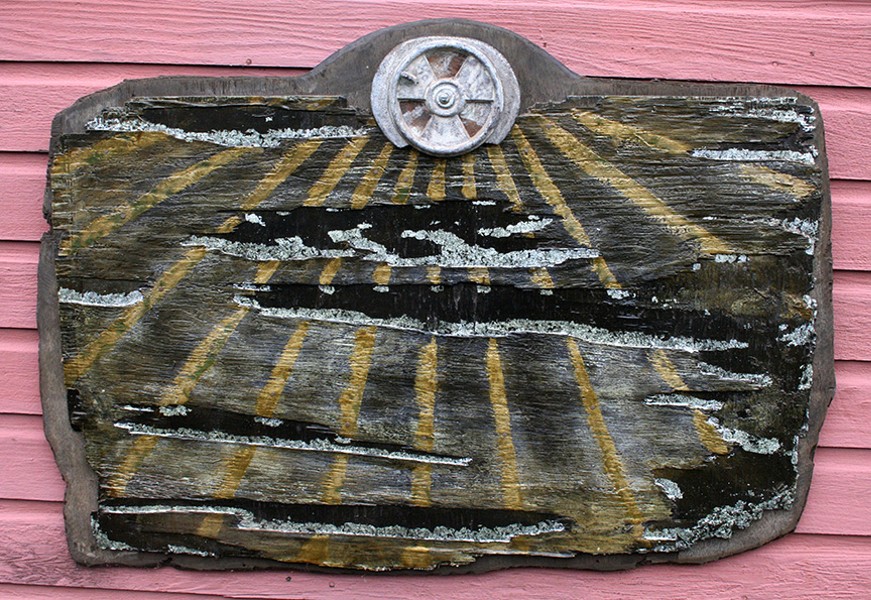 Photos by Ken Weiderman Shea outside his studio on Old Arcata Road.

Sometimes it's a little stain from a rusty nail that catches his eye. Other times, it's the cavities chewed into a cheap piece of plywood by beach grime and salt. While most people would rather ignore these aesthetic imperfections, for Arcata artist Zachary Shea, they're inspiration. The history implied by these marks attracts him. Time has done half of the work already, and he sees the creative possibilities in objects that others might simply throw away.

"When I was a kid, I thought I'd be an inventor," Shea says as we peruse the pieces crowded into a makeshift art gallery just inside the door of his studio and shop. He dabbled with magnets and perpetual motion machines, refining what was around him, "taking old things and making them more efficient." Today, Shea is still inventing and bringing new things into the world, but his creations fall more broadly into the realm of art rather than technology or science.

A soft-spoken man in his early 40s, Shea works construction and carpentry, restoring old homes to their original beauty. Art has always been a passion for him. When he's not working or home-schooling his two children, he's often lost in a myriad of creative endeavors.

On a chilly day in late October, he wears a flannel-lined, light brown canvas vest. A simple black beanie is rolled up past his temples, and Shea is clearly delighted to talk about art, function and, most importantly, wood. Tucked into an easy bend on Old Arcata Road, Shea's shop and studio is cold in the early morning. Six massive slabs of walnut rest on platforms, nearly ready for a cross-country journey to a Minneapolis restaurant. Tall ceiling rafters hold years of accumulated wood, cobwebs and dust. Half-finished artworks nestle up against finished pieces. Bowls, benches, funky cabinets, checkerboards, paintings, prints and sculptures fill every inch of space.

One group of pieces, which he simply calls "Suspended Sculptures," stand out. Refined wooden orbs with pointed ends hang from string like fish flapping at the end of a line. Long arcs of redwood, ipe or maple thrust out of sturdy bases, their gentle curves studded with washers and bolts. Shea crafts these curves with thin plies of reclaimed wood — leftovers from construction sites and other jobs. The bolts and washers, sometimes made from pennies, prevent the wood from snapping back to a straight line. Most woodworkers would use glue, but Shea's solution creates a more complex aesthetic. It's somewhat industrial looking, yet the dotted arcs also resemble the subtle bumps of a bending woman's spine. A gentle breeze or intentional nudge sets the suspended bobs spinning, adding a graceful element of movement and play.

Like most of Shea's functional and artistic creations, the sculptures are not varnished or coated in lacquer. Instead, the wood is left bare. It's a decision that reflects Shea's deep respect for the ubiquitous material. "Wood is so tactile. You want to touch it or play with it," he says. "A lot of people will just run their hands over it." Shea likes to encourage viewers to pick up his work, move it around, look at all of the different angles. A smile lights up his face when he talks about kids crawling all over his ladybug sculpture at the Arcata Scoop ice cream shop (the sign and giant ice cream cone outside are his, too).

Beyond the tangible attraction of wood, Shea also appreciates its long history of human use. Wood pre-dates clay as one of humanities' most basic resources. Plastic and metal may have replaced many of wood's former functions, but it's still difficult to envision life without it. There is also a clear environmental aspect to Shea's use of wood. Nearly all of his functional and artistic works use reclaimed wood that would otherwise have been burnt or thrown away. Each piece of salvaged wood has a unique history, lending an intrinsic story to the objects he creates. "Sometimes," he says, "having more of a story with an art piece really helps to enhance it."

A perfect example can be found in one of Shea's assemblage wood paintings. Strolling along a local beach, he picked up a washed-up piece of plywood. Large pockmarks eroded into the surface reminded him of clouds drifting across the sky. Hauling it back to the studio, Shea mounted it on the back of an old, busted Lazio's sign. The cloud shapes are now accentuated with layers of black paint and silver leaf. Glossy streaks of gold radiate out from a circular iron flue pulled off an old wood stove. His loose painting style complements the chaotic, broken edges of the wood, giving the piece a rustic, timeless look. It's as if the image was there all along and Shea simply woke it from its slumber with a creative jolt.

"I've just always been drawn to art. I can't not do it," Shea states plainly. "It's almost like my therapy; it's what keeps me going." Whether he's building a box or sanding a sculpture, he intentionally keeps the line between his functional and artistic work fuzzy. For Shea, it's about continuing to seek that perfect proportion, that subtle curve, and above all, that elusive feeling of perfection. Shea will be a featured artist at Arcata Artisans this month, and there will be an Arts! Arcata reception on Friday, Nov. 8 from 6 p.m. to 9 p.m. The gallery will also feature the whimsical paintings of Joy Dellas and fine metal work of Betsy Roberts.