Summer of Soul and The Sparks Brothers 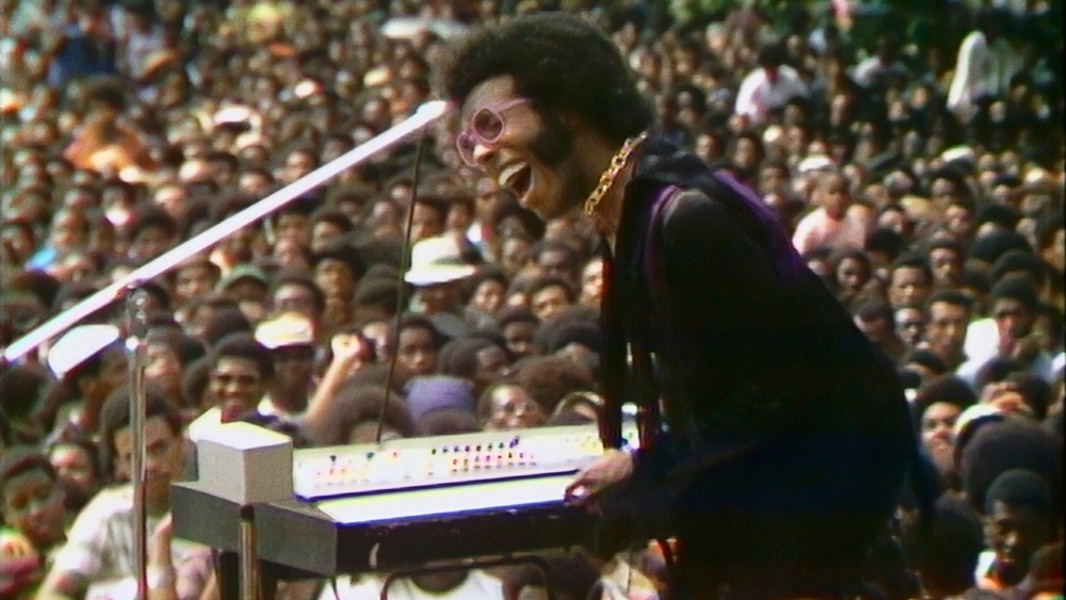 SUMMER OF SOUL (... OR, WHEN THE REVOLUTION COULD NOT BE TELEVISED). Intimates might wonder (fairly) at my desire to watch and ramble on about a concert movie. I've shared freely my general discomfort and occasional disappointment at the live music experience with those unfortunate enough to have to listen, for years beyond counting. It's a product of my own paranoia and insecurity. I can appreciate the spectacle and coming-together-ness of a live show; I'd just usually prefer not to be there in person. This attitude remains subject to change — I've had some mildly debauched, uncharacteristically liberated moments at concerts — and maybe the prospect of a lightening of our collective viral load, both biological and metaphorical, will mean an attitude adjustment. Probably not, though. As uplifting and transcendent as the performances (and sense of community they engender) depicted in Summer of Soul are, as artfully curated and engagingly edited as the movie is, it is still marked by a distinct undertone of suppression, selective memory and erasure. So maybe it's appropriate that I observed the joyous, celebratory communal event by myself, walled off from others.

In the summer of 1969, the Harlem Cultural Festival, helmed by entertainer/promoter/impresario Tony Lawrence and under the aegis of Mayor John Lindsay, put on a series of free concerts in what was then called Mount Morris Park (since renamed for Marcus Garvey). Total attendance is said to have pushed the 300,000 mark, with as many as 60,000 people at a given show. While the simultaneous, nearby Woodstock Festival (and its attendant movie) was touted as the bigger deal, both at the time and in the intervening half-century, the Harlem series boasted an arguably deeper roster of talents and legends: BB King, Nina Simone, Stevie Wonder, David Ruffin, Mahalia Jackson, The Staples Singers and Sly and the Family Stone, to name only a few. The spectrum of music, from pop to gospel to rock 'n' roll to soul to proto-funk, represents the entirety of the tree of American music, from the roots to the fruit. American music is founded on and made up of the music of Black Americans, and it is possible no single richer document of that legacy exists than the concerts on which this movie is based. And, in keeping with America's stewardship of its own problematic history, it was almost excised entirely.

The concerts were filmed, ostensibly for posterity, under the guidance of director/producer Hal Tulchin, whose attempts to market his footage at the time met with abject failure. And so the tapes languished in a basement for 50 years, at which point another producer, Robert Fryvolent acquired the distribution rights and began the process of producing a documentary. He and his business partner approached Ahmir "Questlove" Thompson and the rest, well, is at last part of history.

Sifting through hours and hours of someone else's footage with the goal of winnowing it down into some sort of concise narrative would be a daunting task for the most seasoned of documentarians. By extension, it hardly seems like a job for a first-timer like Thompson. Even if he hadn't cut a movie before, though, the guy's no rookie. One of the foremost drummers and bandleaders in contemporary music, Questlove is also a DJ, a synthesist and archivist of culture. He is also as steeped in American musical tradition as just about anybody. As becomes clear, mere frames into his documentary, he knows what he's doing.

Summer of Soul moves with the punch and fluidity of the best DJ sets, controlling pace and tone with admirable certitude, not shying from quiet, contemplative moments, but also tearing the roof off the sucker when it's time for the drop. The individual performances are just about unparalleled, of course: Simone, Wonder and Sly, in particular, take over the stage with the rarest of charisma and funk.

But the totality of the thing, the compilation of those performances, set beside the cultural import of the festival, the catharsis and uplift it afforded a deeply embattled community (all of which has been denied the larger culture all this time), is much greater than the sum of its parts. Summer of Soul, effusive and bright and brilliant, is a marvel of historiography, a celebration of culture, a reawakening (hopefully) of awareness and a really fun party to go to. PG13. 118M. HULU.

THE SPARKS BROTHERS. I am no expert on the Brothers Mael; I leave that to my friend and sometime replacement Grant Scott-Goforth. But I've been aware of the band — stalwart fringe dwellers and arbiters of lavish pop influence that they are — for a while. I know of them more than I do about them. Well, at least I did until I watched Edgar Wright's loving, exhaustive, charmingly obtuse documentary.

For the uninitiated, Ron and Russell Mael have recorded 25 albums over the course of 50 years. They work together daily and, despite the fact that many of us may have never heard of them, probably influenced more bands than anybody since the Velvet Underground.

For the initiated, Wright's movie does a clever job of both revealing the Maels and obscuring the truth just artfully enough to feel in keeping with their wildly introspective, occasionally baroque, always-boundary-pushing catalog.

ESCAPE ROOM: TOURNAMENT OF CHAMPIONS. Strangers who've all survived deadly escape rooms are thrown in another one to remind you how terrible going outside is. PG13. 88M. BROADWAY, MILL CREEK.

F9. The franchise and its sprawling cast motor on with a long-lost brother and long-lost Han. Starring Vin Diesel and so, so many cars. PG13. 145M. BROADWAY, MILL CREEK.

THE FOREVER PURGE. Who's left at this point? R. 103M. BROADWAY, MILL CREEK.

HOW TO DETER A ROBBER. In snowy Wisconsin, a young couple's attempt to Home Alone some small-time crooks goes sideways. NR. 85M. MINOR.

A QUIET PLACE II. Emily Blunt returns to shush for her life and freak me out even more about leaving the house in a sequel that may have outdone its predecessor. PG13. 97M. BROADWAY.