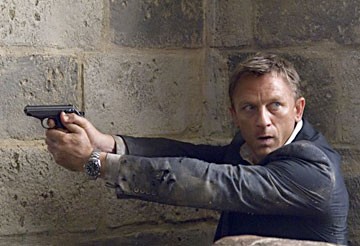 Opening Friday, Nov. 21, is Twilight, based on the popular young adult vampire novel by Stephenie Meyer. Directed by Catherine Hardwicke (Thirteen; Lords of Dogtown), the film features Kristen Stewart as a teen who falls for a gorgeous guy (Robert Pattinson, Cedric in the last two Potter films), who seems to have extraordinary powers. Sounds a bit like the new TV series True Blood. Rated PG-13 for some violence and a scene of sensuality. 122m. Thursday Midnight screenings at the Broadway, Mill Creek, Fortuna and Minor.

Bolt is a Disney animated comedy about a German Shepherd (voiced by John Travolta) who plays a superhero in a TV series and thinks his powers are real. Accidentally sent to NYC, he goes on a road trip to rejoin owner Penny (Miley Cyrus) in Hollywood accompanied by a housecat and a hamster. Rated PG for some mild action and peril. 96m. At the Broadway, Mill Creek, Fortuna and Minor.

QUANTUM OF SOLACE: If you could cast your mind back about two years ago and imagine yourself watching the final sequence of Casino Royale, you might think the past two years have not actually happened, as Quantum of Solace picks up very close to where the previous film ended. But then you would have missed the recent presidential election, which may be good or bad, depending on your political bent.

Solace itself is a good, thoroughly entertaining film, but it does not reach the heights of its predecessor, which was, for my money, the best Bond film ever. In many ways, the film returns to what the best Bond films have always been: Cleanly edited and exciting action sequences, interesting bad guys, appropriately attractive women and scant attention to character development.

Yet, thanks largely to Daniel Craig in his second outing as James Bond, the film retains some of the angst and moral ambiguity that raised Casino Royale above the genre norm (the genre here being Bond films). And since Solace is a sequel, it has two interesting, somewhat intertwined story lines. The putative main line has to do with the attempt by Dominic Greene (French actor Mathieu Amalric) to control Bolivia's water supply while pretending to be what his last name implies.

Amalric makes a fine villain, but the more interesting plot line has to do with whether Bond is so intent on revenge for the death of Vesper (Eva Green) at the end of CR that he can't do his job, and this provides a connection to the latest Bond woman Olga Kurylenko who, as Camille, seeks revenge on Bolivian General Medrano (Joaquin Cosio) for outrages committed against her parents when she was a child. And then there's the question of whether Vesper betrayed Bond.

The film is ably directed by Marc Forster (The Kite Runner), who does best in the action sequences. The title, taken from but apparently sharing no aspects of a short story by Ian Fleming, can in its literal meaning be applied to a number of things in the film, including the group Dominic belongs to and, most poignantly, the information Bond gets at the end. But I still miss someone, and it's Eva. I also have a bit of advice: Jack White and Alicia Keys should never sing together again. Rated PG-13 for intense sequences of violence and action, and some sexual content. 106m. At the Broadway, Mill Creek, Minor and Fortuna.

ROCKNROLLA: Based on his latest film RocknRolla, it's clear that Guy Ritchie has nothing new to offer as a director or screenwriter and, frankly, his old stuff has grown tedious. Lock, Stock and Two Smoking Barrels in 1998, Snatch (2000, enlivened by the presence of Brad Pitt) and even Revolver (2005) were somewhat fresh crime stories made more interesting by a dark, understated humor and Pinteresque dialog.

The ghost of these elements is present in Ritchie's latest, but the energy seems to have been sapped. I managed a few chuckles along the way, but mostly I just wished the tired story would reach its conclusion. In this iteration of Ritchie's crime narrative, the Russian mob headed up by Uri (Karel Roden) is muscling in on the territory long controlled by Lenny Cole (Tom Wilkinson). Throw in the usual thugs of various stripes and several side plots, all of which come together by the end, and you have yourself a Ritchie movie. Thandie Newton does add some elegance to the role of the femme fatale, in this case as Stella, a bookkeeper Uri shouldn't have trusted, but the writing gives her little to work with. Ritchie's go-to actor (Jason Statham) was unavailable for this film, but I'm not sure he would have made a difference.

Ritchie needs to find some new ideas. Perhaps that's what Madonna discovered too. Wait, that's way out of line. Rated R for pervasive language, violence, drug use and brief sexuality. 114m. At the Broadway.

MIRACLE AT ST. ANNA: Spike Lee's latest film received mixed reviews when it opened in September, but I found it to be a fascinating story about a topic that certainly has been covered before but which receives a somewhat fresh if occasionally overly earnest treatment here.

The film is based on the novel by James McBride, who became known for his memoir The Color of Water in 1996, about growing up poor and black in a family headed by a Jewish mother. It begins in 1983 New York, where, for reasons the film will explore, postal worker Hector Negron (Laz Alonso) suddenly pulls out a gun and kills a customer who is attempting to buy a stamp as they recognize each other.

Most of the rest of the film is a long flashback (with some additional flashbacks within the main story) that primarily focuses on a quartet of black soldiers who are part of the mostly black 92nd Infantry Division (known as the "Buffalo Soldiers"). While Lee does touch on the obvious racial inequities of the era (the officers are all white, they don't believe information sent back by the black soldiers, and even in uniform the soldiers are treated like dirt back home), the racial issues are fully grounded in the story.

Besides the young Corporal Negron (also played by Alonso), we follow the exploits of Staff Sergeant Stamps (Derek Luke), Sergeant Bishop (Michael Ealy) and PFC Train (Omar Benson Miller), a large man who rescues and befriends a young Italian boy. Lee is careful to delineate and differentiate these four characters, as well as the Italians and Germans they interact with.

The title refers to the Sant'Anna de Stazzema village, where German soldiers massacred residents in 1944 (Lee admits he took liberties with the incident). But more central to Lee's film, the miracle in the title refers to a specific climactic moment in the story as well as to the final redemption by one of the characters. Lee's film is well worth watching, despite its tendency to sentimentality. Rated R for strong war violence, language and some sexual content/nudity. 160m. At the Broadway.

HIGH SCHOOL MUSICAL 3: SENIOR YEAR. Teen couple lives up their senior year lest they end their romance for college dreams. Rated G. 112m. At The Movies and Fortuna.