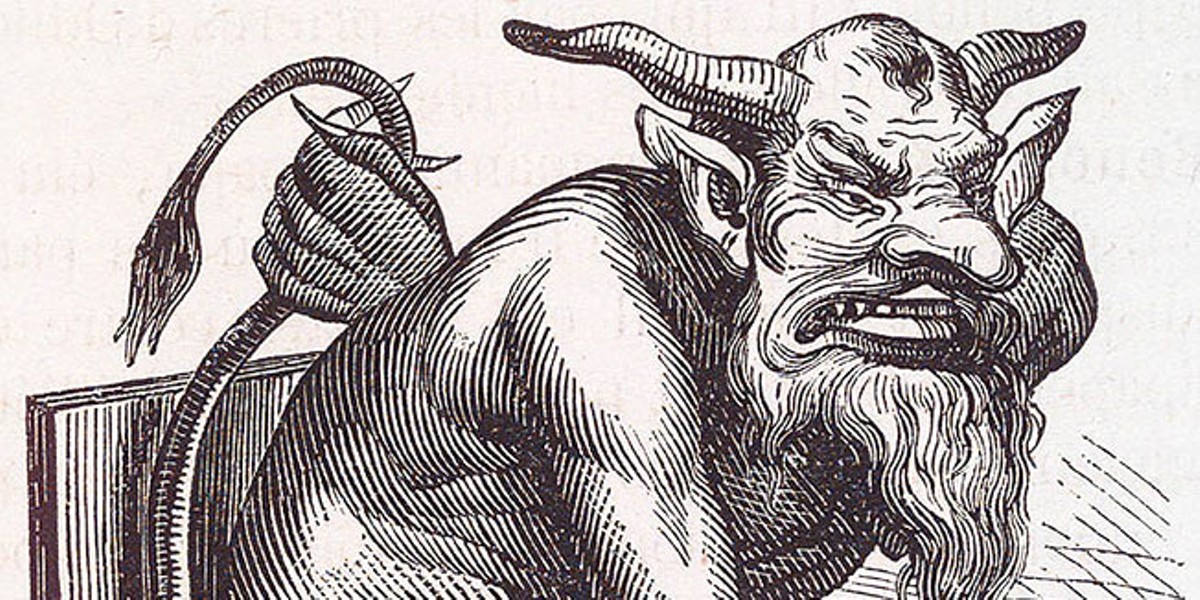 And Israel joined himself unto Baalpeor: and the anger of the LORD was kindled against Israel." — Numbers 25:3

What was it about Baalpeor, a god of the Moab people, that so ticked off the Lord? Presumably it was of his reputation for seducing people "by suggesting to them ingenious inventions that will make them rich." Thus spake Wikipedia. Sounds like my sort of god, candidate for patron saint of all dot-com geniuses. Later, Baalpeor became Belphegor, where he's found in John Milton's Paradise Lost as one of the Seven Princes of Hell. The illustration (showing him sitting on the toilet?) is from Collin de Plancy's 1818 Dictionnaire Infernal, which describes demons of every shape and size. Belphegor, according to de Plancy, was Hell's ambassador to France. ("Bonjour, nigauds!") He's also described as "sloth incarnate," so next time you're too lazy to do something, just blame this dude.

More recently, though, he was adopted by math whiz Clifford Pickover as the name for a diabolical prime number. (A prime, you recall, can only be divided by 1 and itself.) "Belphegor's Prime" is:

This is not only palindromic, reading the same forwards and back (like "Yreka Bakery"), but also contains, in its very heart, the "Number of the Beast," 666. It sits between 13 zeros on each side. And 13 is, of course, deemed unlucky, perhaps because Judas was the 13th participant at the Last Supper.

This would all be more exciting if 666 really were the Number of the Beast but, as I have written before (Field Notes, July 11, 2013), it's really 616. That's according to the earliest — 300 AD — fragment of Revelation, the last book of the Bible, in which 666 is supposed to be found. Hey, if it's good enough for The Da Vinci Code and The Omen ... And (cue spooky music) 666 is the sum of the numbers on a roulette wheel.

The trouble with primes is that once you start investigating them, you can't stop — literally, since there's an infinity of them (proved 2,300 years ago by Euclid in a masterful bit of logic — I'll show his proof online at www.northcoastjournal.com). To whet your appetite:

The largest known prime, found last year, is one less than 2 to the power 74,207,281, a number that would take the equivalent of six Bibles to print. Which sounds kind of complicated until you write it out in binary form: 11111 ...111 (74,207,260 ones). No doubt Belphegor would appreciate the inventiveness in that.

Barry Evans (barryevans9@yahoo.com) is convinced his prime-numbered years are his best years. Roll on 79!