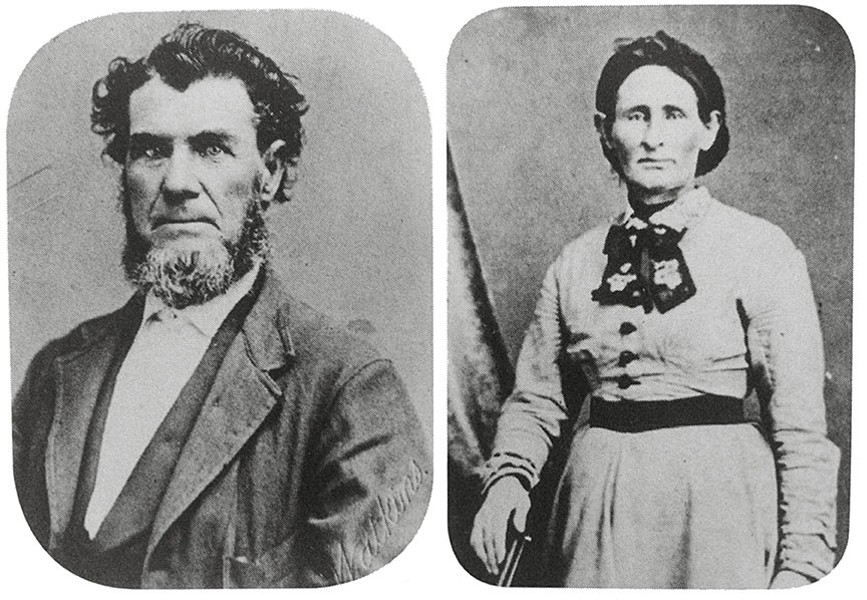 Last summer, when I first encountered the Kelsey National Recreation Trail which runs east-west across the north side of the Marble Mountains, I thought, "I just hope this isn't the same murdering scoundrel Kelsey who helped found Arcata." Hope on. The trail is indeed named for Ben Kelsey, one of the leaders of the infamous Union Company which established the town of Union in 1850 (renamed Arcata in 1860). Kelsey arrived in Union a few months after the initial founding, but his reputation preceded him: "Kelsey of Sonoma (the Indian killer) is on his way here with his own and several other families," wrote a correspondent in Eureka.

By 1853, when Union was declared the seat of the newly established Humboldt County, Kelsey and his wife Nancy had built what traveler John Carr called "the best private dwelling I had yet seen in the state" on the northwest corner of the plaza. Two years later, Ben Kelsey was hired by Crescent City and Yreka to connect the two communities with a pack trail to supply placer gold miners in the upper Klamath, Salmon and Scott rivers with goods from the Crescent City harbor. Eight miles of that route, between Scott River Road and Paradise Lake, is now the Kelsey NRT.

So who was this Ben Kelsey, and how did he acquire his "Indian killer" reputation? Look no further than local historian Jerry Rohde's story about Kelsey and the "Sonoma Gang" in the Sept. 11, 2008 North Coast Journal. Jerry's subtitle pulls no punches: "Remembering the genocidal scum who built Arcata." Briefly, Kelsey had come west from his native Kentucky with the Bidwell-Bartelson party, reaching Sutter's Fort (now Sacramento) in 1841 with his wife Nancy and brothers David, Andy and Sam. Five years later, Nancy (the first white woman to cross the Sierra Nevada) became the "Betsy Ross of California" when she sewed the eponymous flag for the 1846 Bear Flag Revolt that heralded the short-lived Republic of California.

In 1847, Ben's brother Andy ranched at Clear Lake with Charles Stone, and two years later Ben established "Kelsey's Diggings," a mining camp in the Sierra foothills. Both ventures were notorious for the mistreatment of Native Americans, who were slaves in all but name. Once, when Ben was sick, Nancy rode into Sonoma for medicine, where she was "accosted" (her word) by a Native American. "I returned home with the medicine for my sick husband, but instead of taking it, he rode into town and shot the Indian dead," she later wrote.

In the fall of 1849, Stone and Andy Kelsey were killed by Native Americans they had abused. In retribution, Ben Kelsey led a party of vigilantes, "The Sonoma Gang," which slaughtered dozens of innocent Native Americans in Napa and Sonoma counties. Seven of the gang were caught, charged and held on the USS Savannah moored in San Francisco Bay, only to be released on $10,000 bail following the first-ever decision by the California Supreme Court. Five of the seven immediately jumped bail, joining Ben Kelsey (who for some reason wasn't charged) to become part of the 33-strong Union Company which founded present-day Arcata.

Barry Evans (barryevans9@yahoo.com) tries not to associate the man and the trail when hiking the spectacular Eastern Marbles.