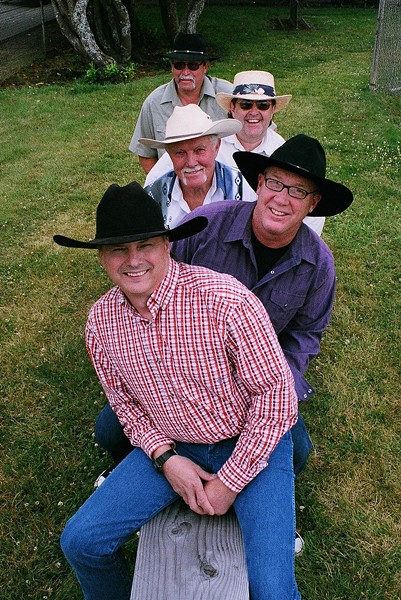 Whole lotta fundraising going on this weekend. We'll start with Saturday at the Mateel where the venerable local country band The Roadmasters play a benefit for the Redwood Run with help from the SoHum Western rock combo The Kent Stephenson Band.

Now this might be confusing for some. After all, last June Redwood Run organizers were reporting that it was the end of the line for the 33-year-old event (see T. McNally's "Thunder in the Redwoods" June 24, 2010). Turns out it was one of those Mark Twain report-of-my-death moments. Longtime organizers Sciandra and Doug McCauley may have called it quits, but the property where the Run is held is co-owned by Kiwanis of the Redwoods and that's who's putting on the party at the Mateel, which, notes Roadmaster Kevin Held, "gets under way around 6 p.m." -- presumably early enough so as not to disturb the neighbors with all the thunder.

Kevin says the R-Masters are ready to "Hic It Up," in reference to one of the band's songs that says, "We're gonna hic it up, pick up the girls in your pick up truck. Grab your boots and hat, let's get on up. We're gonna hic it up, hic it up." With that spelling, I honestly do not know which kind of "hic" they mean. Hiccups?

Saturday night at the Ocean Grove (aka the Open Grave) Humboldt alt. country faves Rooster McClintock reunite for the first time since June of last year in support of the Trinidad Skatepark Alliance and its plan for a skatepark in Trinidad. The even alt-er country band Donny Barnyard and the Dust Devils opens the show starting at 10 p.m.

Friday night out at the Beginnings Octagon in Briceland it's the 9th Annual Pisces Party fundraiser for eco-warrior Richard Gienger's ongoing efforts to restore watersheds and forests. You'll hang with the EPIC staff and board, scarf fine food from Sue's Organics and listen to a little music including Falling Rocks with Ken and Maria Jorgenson, Del McCain and Francine Allen, a songwriter and eco-warrior in her own right (she also works for Trees Foundation).

If you read last week's column you know that last Tuesday was "Fat Tuesday." Nevertheless the Fifth Annual Trinidad School Mardi Gras is on Saturday evening at Trinidad Town Hall. A fancy dinner catered by Hurricane Kate's is followed by blues and soul by Earl Thomas. Proceeds benefit the Trinidad School Education Foundation.

Northcoast Preparatory and Performing Arts Academy has its annual Elegant French Dinner and Dance around the same time at Bayside Grange. NPA teacher Marceau Verdiere (who used to be a chef) helps oversee the three-course dinner starting at 5:30 p.m. The Delta Nationals start playing before 8 -- I'm pretty sure you can skip dinner and just dance. Advance dinner reservations are required however. (Check our Calendar for more details.)

Persimmons in Redway is back in action after a hiatus that found owner/house drummer Michael Curran playing drums over in Hawaii. (Life is hard.) "We're starting up again with Toby Halton, an old friend with an incredible voice," says Michael, adding, "We've set up a ProTools recording station and we're planning on recording all the shows making them available online or whatever -- trying to keep going whatever way we can." The next night Michael leads a quartet with Francis Vanek on sax, Jim Wilde guitar and Joani Rose on vocals.

Not to spread things too thin down SoHum way, but the Kaye Bohler Band plays the blues that Saturday night at the Riverwood Inn (along the blues highway).

Back in Arcata Saturday you have a pair of fine songwriters, Chris Parreira and John Luddington swapping songs at Mosgo's. (Should we describe John as "a member of Absynthe Quintet"? No need, he's his own man.)

And at the Jambalaya Saturday, it's reggae's Mother Culture herself, Sister Carol backed by Yellow Wall Dub Squad with Northtown Dub opening.

If you check our weekly club grid you'll see that there are open mic nights all over the county, pretty much any night of the week. It's not surprising since it's an easy way for bars and coffeeshops to show support for local music -- and bring in musicians without paying anyone. The latest, Mondays from 7 to 9 p.m. at Couple Cups (formerly known as Muddy Waters, then Muddy's Hot Cup), is "The Organic Open Mic." Event host Joe Deschaine explains that it's "organic in the sense that it's all acoustic and original music (no copyrighted cover songs)."

Now I'm taking a small leap here, but from many conversations with often disgruntled business owners over the years I'm going to guess that a visit from a rep for ASCAP (American Society of Composers, Authors and Publishers) or BMI (Broadcast Music Incorporated) might be spurring this aversion to "copyrighted cover songs" since both organizations collect licensing fees for their members, which can come as a surprise to folks new to that sort of thing.

This leads me to last week's Beatles trivia contest. I attended the "Come Together" show at the Arkley by the way -- hard to beat that songbook -- and the band was pretty good, although the ill-fitting wigs and the Sgt. Pepper suits were just plain silly. No one figured out the convoluted answer to the question about the connection between the songs "Come Together," "Lullaby of Birdland" and "Havana Moon," a Chuck Berry song that was the B-side to "You Can't Catch Me." Here's the long version:

The through-line for the three songs is a notorious New York City nightclub operator and music mogul by the name of Morris Levy who started up Birdland, "The Jazz Corner of the World," in 1949. As the story goes, not long after opening he got a visit from an ASCAP rep who demanded a monthly fee for music licensing. Levy had not heard of such a thing and checked with his lawyer, who told him, yes, he'd have to pay. He went on to commission George Shearing to write "Lullaby of Birdland" specifically for the club (presumably to avoid having to pay royalties on at least one song).

Seeing an opportunity, maybe even a racket of sorts, Levy got into the publishing rights business. In 1956 he founded Roulette Records and became a major player in the early history of rock 'n' roll. At the time it was common for record producers to add their names to songwriting credits because, frankly, there was a lot of money in royalties and the kids writing the songs didn't have lawyers. Through this practice and from absorbing smaller labels into Roulette, Levy ended up rich, and in control of rights to all sorts of songs, among them Berry's "You Can't Catch Me."

On "Come Together" John Lennon paid homage to Berry by quoting the phrase, "Here come ol' flattop." (In his tale of a police chase Berry sings, "Here come a flattop, he was movin' up with me ...") Berry's publisher Big Seven Music Corp. (owned by Levy) sued Lennon. The case was ultimately settled out of court with Lennon agreeing to record several songs owned by Levy including "You Can't Catch Me," which appears on John's record, Rock 'n' Roll, produced by Phil Spector.

I described Levy as "notorious." While he was protective of his own "rights," he was known for shady dealing in the record biz, for ripping artists off and for his mob connections. In 1988 he was indicted for a particularly dark deal involving a few dozen truckloads of cutout records, known members of the Genovese crime family and an assault on a low-level record wholesaler. Levy was convicted on extortion changes, sentenced to 10 years in prison, appealed, then died before the case was reheard.