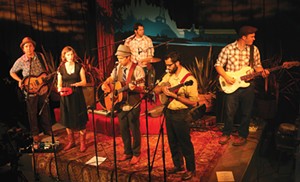 This hard-fought category saw around 150 different local bands that someone considered "best." Among them: "The one I saw at this one house -- a gal was playing the saw with a violin bow in a Slipknot-esque mask. Sounded like a rockabilly metal set. (There's a lot of good bands, I just can't name them.)" Another reader complained, "A few categories would've helped. How to pick between a really talented bluegrass band full of veterans and an upstart young punk trio? Can't."

Elimination of expert campaigners St. John and The Sinners opened up the field. (The two-time winners still got several votes.) It all came down to a neck-and-neck three-way race among the festival-hopping gypsy jamgrass band Absynth Quintet, hard-working Americana rockers The Trouble, and gospel-tinged country rockers Huckleberry Flint. In the end, Huck took it by a nose.

All three bands were top vote getters last year and all were on our short list for Friday's Best of Humboldt party before voting began. We hired two out of three. AQ declined since the band is playing the Mateel's Humboldt Hill Hoedown on Saturday, adding yet another fest to a summer list that included the Strawberry Music Festival, the Oregon Country Fair, the Trinity Tribal Stomp, the String Summit at Horning's Hideout and Gaia Fest. The Trouble have had a great year too, playing just about every club in town. With Marc Jeffares and Chris Parreira continually coming up with new songs, the band keeps getting stronger.

Huckleberry Flint went through a major transition a couple of summers ago, losing longtime players, adding new ones and going semi-electric in the process. Huck Flint does not work the bar circuit; in fact the band does not play many shows at all, but by all accounts, every performance is absolutely stellar. Huck's shows at the Humboldt Folklife Festival this summer and last were both legendary, with Dustin Taylor's shimmering vibrato taking the music to new heights. Is this the best band in Humboldt? Decide for yourself on Friday night.