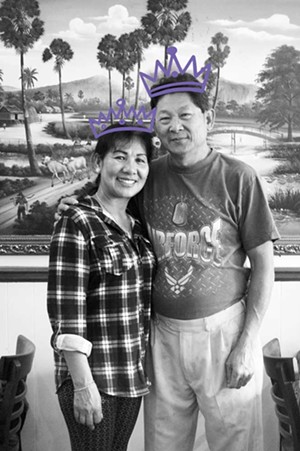 Really? Cambodian is literally in the name of the restaurant, folks. "Our food is similar to Thai food but it's not as spicy as Thai," says Chin Chau. "We have a few items that are almost like Vietnamese food," he adds, noting that Cambodia is situated between those two Southeast Asian countries. But the closest thing to Chinese food on the menu at Annie's Cambodian Cuisine, the beloved Eureka restaurant Chau has owned with his wife Annie since 2011, is probably the cheese puffs, which, while dreamy, are not actually Chinese. Whatever. Try their family recipes for gingery fish amok, lemongrass stir fry or phlea beef salad and you'll agree the place deserves an award for something.

Chin and Annie immigrated to the U.S. from Cambodia in 1980 and 1981, respectively, as war refugees. They did stints in Thai and Philippine refugee camps before meeting in San Francisco. Any day but Sunday, when it's closed, you'll see Chin or Annie cooking in a cloud of steam in the back. Anything you order will be delicious, with the alternately bright and earthy flavors of the Kingdom of Cambodia. Just don't go looking for kung pao.