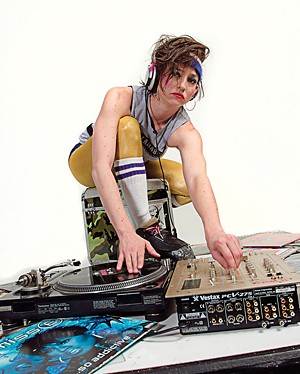 The choices were an A-to-Z of local DJs, from Accurate Productions to Zephyr. Various members of the Missing Link crew (especially Mantease) drew big numbers, as did DJ Red. One opinionated reader mused: "Best? Or most popular? Most popular = either Itchie Fingaz, Dub Cowboy or Matt n Adam. Best? Probably State Of Mind, Drassar Monumental or Mad Planet. Most versatile? DJ Muthafucking Red! Have you seen that asshole's vinyl collection?"

The overall winner, DJ Anya, had some advantages: She's been spinning records (or, as she puts it, "booty shakin' Humboldt") since 2002, for all sorts of parties from Club Triangle to DJ Anya the Bunny Slayer's "Hella Gay! Dance Party," and now "Dirty Dancing Thursdays" at the Alibi. The latter is in partnership with Gabe Pressure under the Pressure Anya banner. A look at last weekend's calendar shows how Anya took the title through hard work: A Dirty Dancing tribute to 2Pac was followed by a Friday evening spinning records at Bang! Bang! during Arts! Arcata, then an all ages Zombie Dance Party at Sopai's Cave the same night, and on Saturday a '90s Dance Party at Nocturnum.

As one reader proclaimed: "DJ Anya keeps it fresh and fun with a great mix of hip hop, dance, '90s and world."