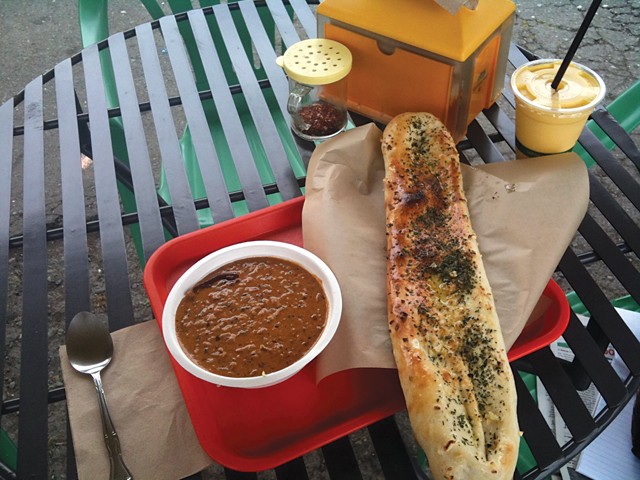 We used to think the name “Naan of the Above” was just another glib pun. Then we had the garlic naan -- buttery and piquant and longer than an elephant’s ear -- and we got it. This food must be made somewhere above the Earth, in some higher, more spiritual plane, where newborn babies exhale coriander and turmeric and myhrr, where recipes unfurl like flower petals in a multi-dimensional garden we are too stolid to enter. Behind the walls of that yellow truck on Seventh Street in Arcata, they are teleporting the food in from Above. How can we be sure? The curries, almost frighteningly, are Better Than the Naan.

Oh, you poor unenlightened soul who wrote of food trucks, “I don’t eat at those,” let us you lead you to Naan of the Above. It would be the Nirvana of food trucks, if only the voluptuous pleasures of food still tempted those who had achieved Nirvana. Instead, it will simply have to settle for being -- Above.