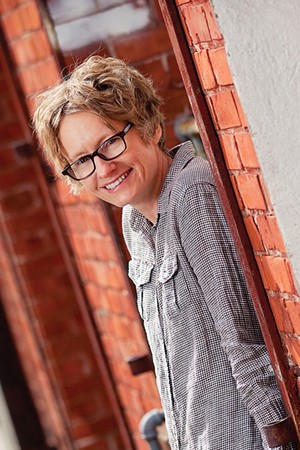 Some of you need to read more, shall we say, closely. "Me no read local book," said one commenter (sounding suspiciously like Bigfoot). "We have local authors? Have any of them gained notoriety?" asked another. Hullo -- Bret Harte ring a bell? Raymond Carver? Certainly their names have leaked beyond our cloistered borders. True, though, as another person noted, they're dead.

But we've got tons of local authors who are living. Jim Dodge, Cecelia Holland, Pam Service, Ray Raphael, Marie Raphael, Freeman House, Natasha Wing, Mary Nethery, Terry McLaughlin, David Dun ... the list goes on. Some of these folks have written bestsellers and been interviewed in local and national media.

There is one, however, who in recent years has captured numerous hearts locally and abroad with her strangely absorbing topics and her straightforward, smart and funny style. Hints: She likes, and writes about, chickens. Dirt. Booze. Worms. Dangerous bugs. Evil plants. Three of her six natural history books have been on the New York Times Bestseller List: Wicked Bugs, Wicked Plants and Flower Confidential. She's been interviewed on NPR's Fresh Air and Morning Edition, profiled in the San Francisco Chronicle and the New York Times, and has appeared on CBS Sunday Morning, Good Morning America, PBS and TLC's Cake Boss.

That enough "notoriety" for ya?

We happily disclose that Amy Stewart also writes for the Journal, where her current column, "The Drunken Botanist," is shaping into a book that will be published next spring.