Best Oysters on the Plaza

And finding them when the festival is over 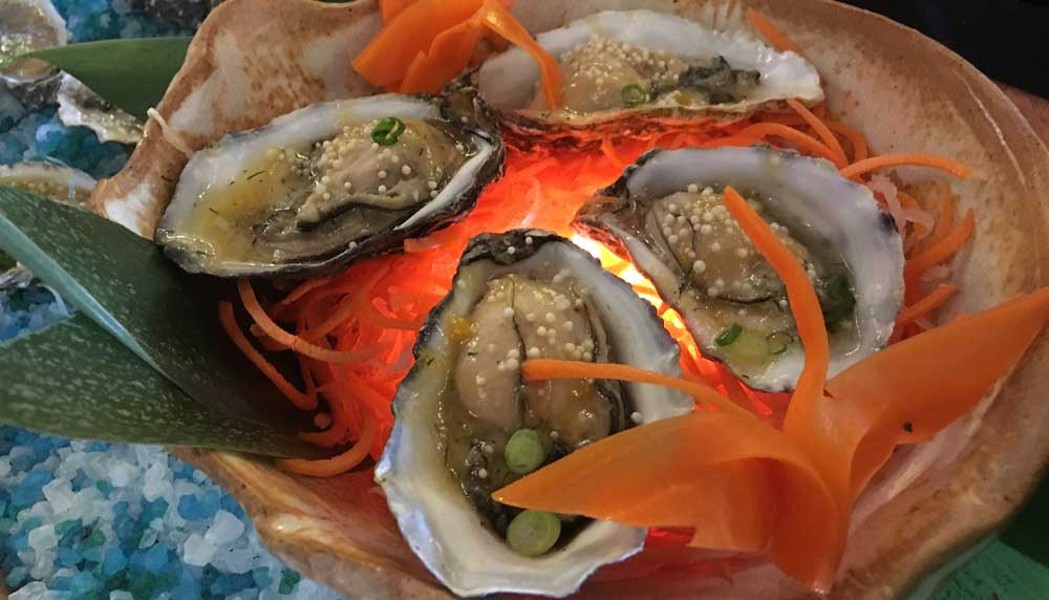 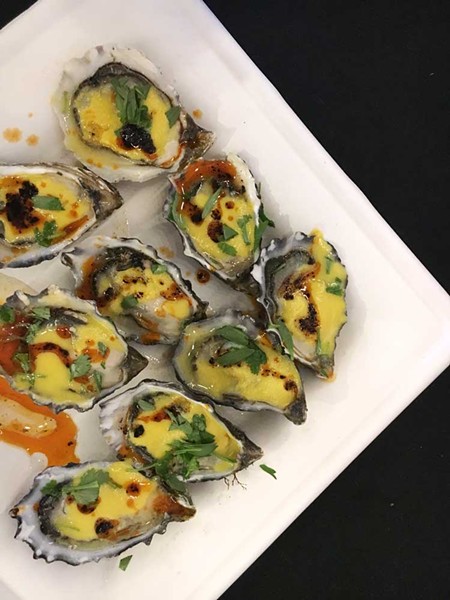 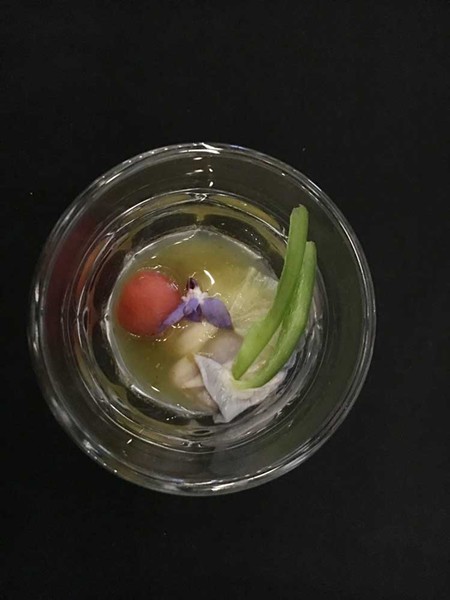 On Saturday morning, as locals and tourists were still making their way to the plaza from distant parking spaces and (one hopes) slathering on sunscreen, 18 judges crowded around a trio of awkward tables in the lobby of the Jacoby Storehouse. Volunteers brought in candidates for Best Raw, Best Cooked and Best Non-oyster at the Arcata Bay Oyster Festival — ice-packed trays of half shells, paper cups and glasses with shooters, platters aglow with LED lights. Once the judges took their obligatory photos, they slurped the anonymous offerings, dished about their presentation, flavor and creativity, and jotted down their notes on color-coded forms.

Whether declining due to the labor and high cost of running a festival stand and sending 18 free oysters to the judges ("Shelling Out," June 22, 2017), or the daunting task of beating repeat winners, the number of contestants continued the dwindling trend of recent years, adding up to only 15 items.

Despite the return of alcohol to the judges' tables — magnums of Cook's California Champagne towering among the bottles — by noon the last morsel had been sampled and Sydney Marrone and Jessie Hobba were doing the math. Winning means bragging rights, of course, but an award can also mean a substantial bump in business for a restaurant, luring customers who want to sample the best. Beyond the winner's circle, though, there are plenty of good oysters worth chasing down. More on that later.

Pizza Gago, winner of Best Non-oyster for its wagyu beef and chimichurri pizza, nearly took the Best Cooked category with its garlicky pizza topped with lemon and coconut cream sauce, bacon, spinach and oysters. That entry sparked some debate among the judges since the oyster was not the star of that dish — some slices of which had scant chewy bits of the bivalve, if any — but its flavor was evident and the pizza was tangy, rich and honestly delicious.

Best in Show shocked no one with frequent winner Sushi Spot claiming the prize for its Goose Point oyster shooter with spicy yuzu citrus pepper sauce, jalapeño, lime and a teeny peeled cherry tomato. Peeled. Back at the tent on the plaza, Sushi Spot's Eric Stark said that was down to Executive Chef Junko Otani, who prepped the winning shooter. "She's pretty incredible," he said, squinting in the sun. This is the restaurant's eighth win. "It's been good, yeah," he said. "We sell a lot of oysters and it's been good for business." Clearly. The line at the stall was the longest on the plaza, snaking the better half of the block.

As for whether we'll see the same item on the menu at Sushi Spot's Arcata or McKinleyville location, Stark offered only a small smile and a "We'll see." The cooked entry from the restaurant, a barbecued oyster with uni sauce, was cost prohibitive and not even on offer at the festival stall (a fact that would have disqualified it from winning).

While available at the festival, Blue Lake Casino's winning oyster isn't on the menu at Alice's yet but the staff said it may be soon, depending on sales at the festival. By the time the plaza sunburns heal up, Hog Island's frankly marvelous oyster will be but a memory and if you catch up with Gago's mobile oven at the McKinleyville Farmers Market, what are the chances it'll be firing up that oyster pizza?

Not to worry. Here are a few favorites from the festival to try without the long lines and the beer spilled on your shoes:

Former winner Folie Douce (1551 G St., Arcata) has been bringing the same oysters to the fest for a couple of years now and, while it didn't enter the contest this year, its menu features the deconstructed sushi with crispy nori that wowed judges and even scared one contestant out of entering.

Over at Campground (865 Ninth St., Arcata), look for the grilled oyster with red chimichurri and crumbles of queso fresco. In contrast to all the acid-heavy shooters and buttery broilings out there, this fat Pacific oyster simmers in its shell with a mild tomato-rich sauce.

Tomo (708 Ninth St., Arcata) won Best Raw in 2013 with a spicy ginger and citrus shooter you can still find at dinner. But don't sleep on the katsu oysters, fried in crunchy panko crust and zig-zagged with tangy katsu sauce. Commit to sharing or guard your plate.

Not that the wait will be that much shorter at Sushi Spot (670 Ninth St, Arcata; 1552 City Center Road, McKinleyville) after this win, but if you're into cooked, order up the Kaminari oysters (meaning "thunder" but sold at the fest as the Incredible Hulk — shouldn't it be Thor?). Grilled with a dollop of garlic-jalapeño aioli, a scatter of chopped macadamia nuts, cilantro and masago or tobiko, it miraculously doesn't overwhelm the oyster itself. Ask chef David Hernandez, who couldn't turn them out fast enough for the throngs on Saturday, even pre-shucked for speed. Incredible, indeed.