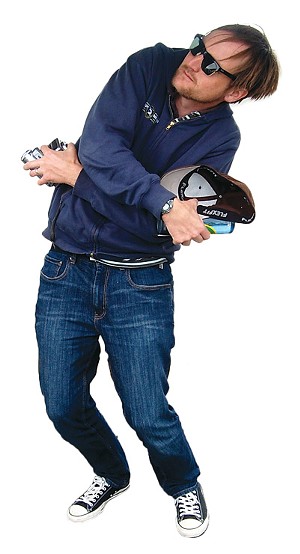 The needle's stuck. For the second year in a row, KHUM's Mike Dronkers is Humboldt's favorite radio DJ.

Dronkers' weekday midday show, "You and Meme," features music from accapella to zydeco and commentary about life and local news, which he says he tries to deliver in a way that makes sense to normal people, not policy wonks.

We have lost the companionship of DJs in this era of Internet radio. And a lot of the DJs we do hear on our dial lead us to say, "Shut up and play the music already." But with Dronkers, we anticipate the space between songs; we revel in hearing him speak to us.

Who is this man who hides behind radio's static curtain? We did a shotgun interview with Humboldt's favorite DJ.

NCJ: You're stuck on an island with just one album; what would it be?

MD: My answer is consistently used against me. But I would take Phish's A Live One. They're great musicians, and they're long songs. I mean if you're going to be stuck on an island for seven days or seven years, you need something with some legs.

NCJ: Do you have a catchphrase?

MD: I do. It's a quote by Barney Frank, the congressman from Massachusetts. "It is a tribute to the First Amendment that this kind of vile, contemptible nonsense is so freely propagated." It's true for so many things, such a fantastic position to take.

NCJ: If you could get any artist alive for a live, in-studio performance, who would it be?

MD: Prince, because he's so hard to get and he's legendary live.

NCJ: Who is your favorite Beatle?

MD: Paul McCartney because he has a sense of melody that appeals to me. I don't care for John Lennon or Ringo.