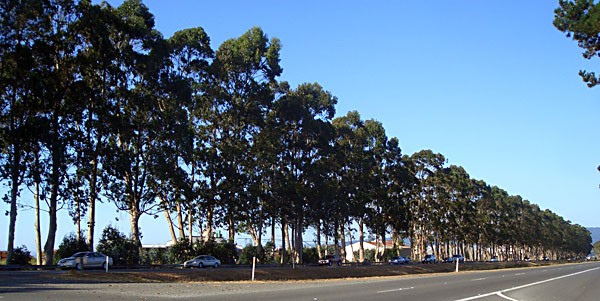 Most researchers believe that all our ancestors lived in Africa 70,000 years ago. Soon after, our species started to spread out across the globe, meaning that here in California, we humans are a non-native species ... just like the eucalyptus. OK, not quite like the eucalyptus, which only arrived here 160 years ago -- but unlike the tree, we're not classified by the California Exotic Pest Plant Council as an "invasive non-native species."

The eucalyptus we see here -- Eucalyptus globulus -- hails from Australia. It now thrives on every continent, following its introduction to the rest of the world in the 1800s. The eucalyptus family numbers some 600 species in its native land, where the trees are more generally known as "gums" or "blue gums" ("kookaburra in a gum tree"). Eucalyptus oil is used for just about everything medicinal, from a cure for upset stomachs to an antiseptic balm for gashes to an inhalant for stuffed-up sinuses. Early Aussie settlers used the long straight trunks for house and boat building material, bridge pilings and firewood.

Joseph Banks, Captain Cook's botanist, brought some specimens back to England, where a visiting French botanist, Charles de Brutelle, chose the scientific name: "eu" means "good" or "well" in Greek, while "kalypto" means "I cover." The cover refers to the hood over the flower which is thrown off just before blooming.

Eucalyptus seeds were probably first imported here during the Gold Rush. One sack-load represents thousands of the fast-growing trees, and presumably many sacks of seeds were brought here in 1849, the year that nearly 3,000 Australians sailed from Sydney bound for San Francisco and the gold fields beyond. Within a few years, the "gum" population was exploding all over the state.

Back to the present: The tree's "invasive, non-native" status gives Caltrans some leverage for its plans to cut down about half the 600-odd eucalypti lining part of the bay side of the Arcata-Eureka 101 corridor. The mile-and-a-quarter stand was planted in 1926 and cut down seven years later following extreme frost damage. The 80-foot tall trees we admire today sprouted spontaneously from the original planting, reminding us just how persistent nature can be.

As part of its proposed "101 Corridor" improvements*, Caltrans wants to remove the trees in order to provide better access for the California Redwood sawmill. At an information meeting last December, a Caltrans representative told me the agency would also like to minimize the maintenance job of sweeping up the droppings that land in the southbound cycle lane. As a regular cyclist between Arcata and Eureka, I'd prefer to take a bit of extra care navigating the leaves and leavings, while enjoying the best-smelling plant on earth.

Barry Evans (barryevans9@yahoo.com) suggests we might be better off cutting down the billboards on 101 and leaving the trees. He lives in Old Town Eureka.