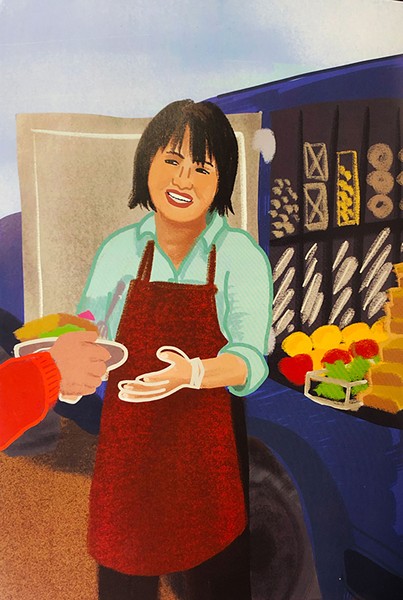 It's not a title Betty Chinn ever sought out, or even one she thought fit. In fact, when an author got in touch with Chinn to ask about including her in Girl Activist, a children's book aimed at inspiring girls to make a positive impact in the world, Chinn wasn't inclined to do it.

"I thought, 'Why are you choosing me? How many people are out there doing good things?'" she said.

But then the woman who has largely dedicated the last 30 years of her life to caring for Eureka's homeless population thought about what President Barack Obama told her when giving her the Presidential Citizens Medal, the second highest civilian honor in the nation, a handful of years ago.

"He told me, 'You have a voice. You have to speak up. This is not about Betty — Betty no longer belongs to just you,'" Chinn recalled last week, sitting at a conference table of the homeless day center her foundation opened in 2014.

Chinn agreed to be interviewed by the book's authors — Louisa Kamps, Susanna Daniel and Michelle Wildgen — and is now one of 40 women profiled in the final copy, which was published by Downtown Bookworks and hit shelves last month. Chinn said she was stunned when she saw the company she would be keeping in its pages, including Rosa Parks, Eleanor Roosevelt, Jane Goodall and Billy Jean King.

"Look at all those names in there," she said, noting her chapter comes right before one on Lady Gaga.

"I had no idea who she is," Chinn said with a laugh.

With the book billing itself as a pathway toward inspiring young women to stand up for their beliefs and mobilize their communities to make a difference, Chinn seemed a natural choice.

"We were focused on activists who were inspired by their own lives and histories and had practical strategies that produced tangible results," Daniel wrote in an email to the Journal. "Chinn has been outcast and hungry as a child — and she saw children going hungry in an otherwise comfortable community in California. She didn't simply give money or raise funds, she started cooking and handing meals to homeless men and women, morning, noon and night."

Chinn has long maintained that her outreach efforts are her passion, a way for her to heal old wounds by doing for others what was never done for her when she was homeless as a child. Born to wealthy, Christian, Western-educated parents in China's Guangdong province, Chinn and her family were targeted during Mao Zedong's Cultural Revolution. Chinn's father fled the country, her mother was jailed and Chinn's siblings were sent to labor camps. While Chinn also spent a stint in a labor camp, at 7 years old, she was too young to do the back-breaking work in the rice fields and was kicked out of the camp and left homeless on the streets. For four years, she found refuge in a garbage dump and foraged for food. Mao's Red Guard forced Chinn to wear a wooden sign around her neck that read "child of the devil" and forbade anyone from speaking to her. By the time Chinn and three of her siblings fled on foot to Hong Kong, she'd gone mute from the ostracism and deprivation.

After immigrating to the United States, Chinn married a Humboldt State University physics professor, Leung Chinn, settled in Eureka and had two sons. She was volunteering at her sons' school when she noticed one of their classmates was homeless, living in a car with her family. She began to pack the girl lunch, then started cooking the family meals, then began cooking for other homeless families.

"Soon," as the book tells it, "she was feeding hundreds of homeless people every day."

As we reported in our Sept. 15, 2016 cover story "Prove Them Wrong," many of Chinn's early outreach efforts were met with staunch resistance from the local business community, who feared she was enabling the homeless and making the problem worse. She was harassed by the police, berated on street corners and told she was unwelcome in Old Town. In fact, it's only the last decade that's seen Chinn hailed as a local hero, and she hasn't proposed a project without meeting resistance from some.

Chinn said it was important to her that her chapter in Girl Activist highlight how it's really the local community that has enabled her to do so much, saying its generosity has enabled her to go from feeding people from her own kitchen to where she is now, with a day center, a family shelter and a transitional housing project all run through her foundation. She's become a "middle man," she likes to say, between people who need help and others who want to give.

Sitting in the day center last week, she explained how it was able to offer a summer camp for homeless kids this year, giving them a safe, productive place to go and their parents time to work or find jobs. "I was never a child who went to camp," she said. "I went to a labor camp."

Chinn said she had just finished distributing 275 backpacks filled with school supplies to families in need, adding that a single local business owner paid for 100 of them. That took Chinn on a tangent. Did you know, she asked, that more than 20 of the kids she used to give backpacks to, whose families she used to and still does feed, are now in college?

"Can you believe that?" she asked.

Not waiting for an answer, Chinn's focus then shifted to the Uplift program launched through the center earlier this year. It pairs homeless people with a one-on-one coach, who helps them with everything from building job skills to community improvement projects, like going out and cleaning the trash left by homeless encampments in the city's green belts.

"They see this is their past, where they made a mess and didn't clean it up," she said. "And they see themselves as a part of the community, a part of the solution."

Then there's Blue Angel Village, the transitional housing project in converted shipping containers that Chinn launched when the city of Eureka cleared the homeless encampments in the PalCo Marsh, that's still going strong, helping connect people with jobs and permanent housing. And the day center recently launched a family literacy effort and this week welcomed 24 kids into its after school program.

"I work so many hours in so many different things but I don't feel I have a burden on me," Chinn said before saying she had to "get going."

With that she walked out into the day center's lobby where a young man was waiting. She walked over and asked how she could help. The way Kamps, Daniel and Wildgen see it, this is exactly what an activist would do.

"Her organizing career centers and temporary housing rose from her very straightforward solution: feeding hungry people," Daniel wrote in the email to the Journal. "An activist sees a problem and implements a practical solution, no matter what results are predicted or promised."

It turns out Betty Chinn has quietly been an activist all along.