Greensky Bluegrass, plus The English Beat, Sloth and Leap Day 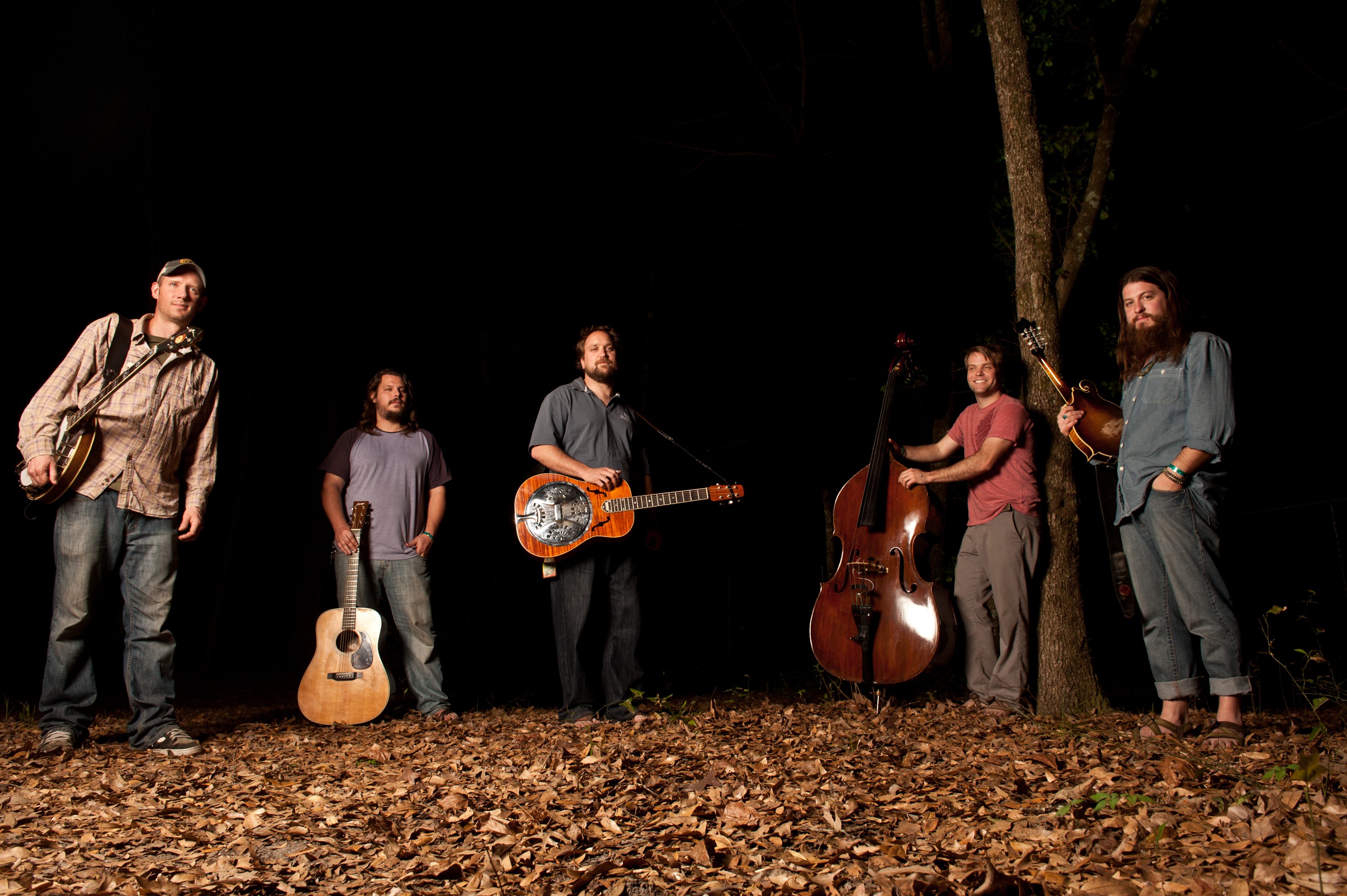 Put together a banjo, guitar and mandolin and you have the makings of a

bluegrass band, or in the case of Greensky Bluegrass, a jammy, rockin' stringband with distortion pedals (with "bluegrass" in its name).

When we caught up with Greensky Bluegrass guitarist Dave Bruzza, the band was in Jackson Hole, "on the ski portion of our tour," as he put it. Next stop Montana for the Big Sky Big Grass Bluegrass Festival. How does a jamgrass band like Greensky fit in at a bluegrass fest?

"Well, we have a banjo," said Bruzza with a laugh. "We're more of a rock ‘n' roll band now, but when we started we played bluegrass, traditional tunes by Bill Monroe, Flat and Scruggs, stuff like that. But we've really evolved into a unique sounding quintet."

It started in Kalamazoo, Mich. Drummer-turned-guitarist Bruzza ran into guitarist-turned-banjo player Mike Bont on the open mic circuit. They met Paul Hoffman, who had picked up a mandolin. "He wanted to learn how to play bluegrass," Bruzza recalled. "We kept playing; it turned into a band and we got some gigs. It just kept going."

The start was around 2000. "In 2002, O Brother Where Art Thou came out and that made it more appealing to the masses," said Bruzza. "Of course hippies and Deadheads always loved it."

A decade of relentless touring, 200 or so shows a year, took Greensky to the upper echelons of jammy string music with some notable stops along the way: In 2006 the band won the Telluride Bluegrass Festival band competition; it has since played Bonnaroo, Bumbershoot, Hardly Strictly Bluegrass, Northwest String Summit and on NPR's Mountain Stage.

"The past five years have been really big for us," said Bruzza. "We hit the road, played all the big festivals we could, wrote a lot of songs and put out some decent albums. I'd say our songwriting and our style speaks for itself. We let things go a bit longer and explore a bit more, experimenting more than most stringbands, that's for sure. I think we have a different sound compared to other bluegrass -- or whatever you want to call it."

What should you call it? Decide for yourself when Greensky Bluegrass takes a break from festing Tuesday to play at Humboldt Brews.

Humboldt Folklife Society presents an intimate evening of bluegrass-ish picking at the Arcata Playhouse Friday with a duo made up of banjo man Chris Coole, formerly of The Foggy Hogtown Boys, and ace dobro player Ivan Rosenberg. HFS Prez Patrick Cleary notes that Rosenberg was once an HSU student. "Legend has it he even received a degree in literary studies. He also spent a fair amount of time playing Ultimate Frisbee with the Humboldt Buds and attending sit-on-the-floor potlucks at fellow students' houses. While living in a single-wide shanty in Westhaven that he shared with a friend and a couple of large wood rats, Ivan taught himself to play the banjo, spending many hours on the couch learning to play (yes, over and over again). He then did the same thing with the dobro. These days, Ivan is one of the top dobro and clawhammer players in the country." Cleary lays on further accolades, but we'll just say the duo is really good and if you like good pickin', you'll like this show.

Among the top bands in the British two-tone-ska movement at the end of the ‘70s was a band known as The Beat, renamed The English Beat in America to avoid confusion with some band we've since forgotten. Ska went through various waves (are we up to five?), but never really disappeared, and Beat lead singer/guitarist Dave Wakeling kept at it in various bands, most recently returning to The English Beat name. He brings The Beat to Humboldt Brews Friday. Be there.

Keys wiz Brian Swizlo is fired up. He's joining forces with Darin from Moo-Got-2, guitarist Wolf Navarro and Wolf's band Silent Giants as Sloth, doing a full evening of Phish covers Thursday at the Red Fox. "I admit learning all these tunes has given me quite a respect for Phish, and the experience will make me a much better keyboard player," said Swizlo. "Those dudes are serious about their songwriting!"

The following night, Friday, the Red Fox has Silver Hammer, a tribute to The Beatles (another band that was serious about its songwriting). Then there's that most tributable of bands: The Dead. The Miracle Show pays tribute at the Wave Saturday night. The folks at the casino invite you to "dress up in tie-dye" for the occasion.

The name might make the Portland trio sound like a folk or bluegrass band, but rest assured, The Quick and Easy Boys rock, hard. Q&E hits the Jambalaya Friday with bluesy local rockers Children of the Sun opening.

Songwriter/guitarist/concert promoter Chris Parreira has a busy weekend planned. Thursday his trio Lonesome Roses opens for The Shook Twins at the Arcata Playhouse, a show he produced (see story in our calendar for details); Friday Chris rocks Blue Lake Casino with The Trouble, Saturday he's solo at Robert Goodman Wines. Sunday? Let's hope he gets some rest.

This month's Missing Link's Got Soul danceathon is Saturday at Humboldt Brews. As a warm-up, DJ Red is bringing his turntables down to Missing Link Records during the day. "A bunch of us are going to be taking turns playing records all day on Saturday -- like an old school platter party," Red informs us. If you just can't get enough of that vinyl, stop on by.

Remove the guitar from a punkish rock band and it's not drum ‘n' bass, rather bass and drums. The crashing low-end sound of Seattle's Monogamy Party follows in the footsteps of bands like Big Business and godheadSilo -- the trio hits the Alibi Saturday with local punks A.M. Beers opening.

"Philadelphonic" hip hop bluesman Garret Dutton, aka G. Love, returns to Humboldt Monday for a show at Humboldt Brews with his band Special Sauce. G. enlisted the Avett Brothers, Scott and Seth as sidemen and producers for his latest album, Fixin' To Die, which led to a grittier more roots-oriented sound. With that in mind it makes perfect sense that he's on tour with Austin's raw stomp-bluesman Scott H. Biram, whose recently released album, Bad Ingredients, shows off his fine songwriting chops (but still kicks ass).

On the alt. side: a Monday show at Lil Red Lion bringing together Filardo, a solo experimentalist from Arizona, with Iji, an equally experimental band from Seattle, and Humboldt's favorite alt. alt. combo Creepy Marbles.

NOBUNNY, a dude in a somewhat scary bunny mask, mixes alt. bubblegum pop, garage, rockabilly, psyche, etc. and calls it "NO genre. He begins his West Coast tour on Leap Day, Wednesday, Feb. 29, at the Shanty with Radios In Caves opening.

Earlier that evening (6-ish), it's a "Leap Year Ukextravaganza!" at Mad River Brewing Company. UKEsperience invites you to "Come drink beer with us on this day that really doesn't exist."