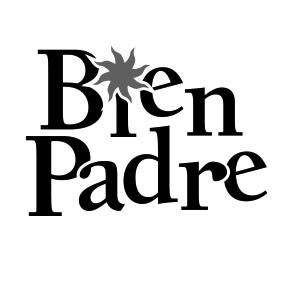 Bien Padre -- The hip Mexican brand name surprised me when I first saw it years ago. I wondered if the owners of the company knew what it meant -- but more on that later. Let's review the chips:

Most of us on the North Coast are familiar with the industrial-sized corn chips from Bien Padre. They're the ones that don't break when you scoop up a load of guacamole. "You can really taste the corn," someone said to me recently. Yeah duh, they're corn tortilla chips after all. But her point was that the predominant flavors in most corn tortilla chips are salt and oil. Not so with Bien Padre's Flax Grandes. The toasty corn flavor is pleasantly accompanied by the agreeably bitter, nutty-flavored flax seeds (an excellent source of omega-3 fatty acids). Cooked in sunflower oil and lightly sprinkled with sea salt, you won't find a more healthful chip.

Flax Grandes can be enjoyed plain, but they're famous for scooping guacamole. I enjoy them with thinly sliced cheddar, and they go surprisingly well with goat cheese. I heartily recommend Cypress Grove's Purple Haze (flavored with lavender and a trace of fennel) on Flax Grandes for a complex and satisfyingly flavorful treat.

Back to the mysterious name. When marketing manager Seyedu Chalker started with Bien Padre Foods a few years back, he was often teased by Spanish speaking employees when he was out on his sales and delivery rounds. He'd walk in and they'd say, "Hey, we like your truck; it's bien padre!" They would chuckle and then say, "Hey, we like your shoes; they're bien padre!" Mr. Chalker asked a Hispanic family member about the joshing and learned that the Mexican colloquial phrase means something to the effect of "super cool."

From the first time I saw the brand, my hunch was that the company owners were not native Spanish speakers, but a serendipitous mistake seemed unlikely. Chalker confirmed that indeed the original owners of the company were not Spanish speakers. He reckons that one of the original employees, with tongue in cheek (after all, bien padre is the rough equivalent of "bitchin'"), suggested the name.

Bien Padre Foods started in 1974, with the proletarian tagline, "Great Food at a Fair Price." They began with organic corn tortillas, and after borrowing a deep fryer from a local Mexican restaurant, they ventured into the competitive tortilla chip market. I come from the land of tortilla chips, and I guarantee you that from Topanga to Tijuana there's nothing comparable. The bitchin' name wouldn't hurt sales down there either.