Old-growth gurus talk about growing forests for the future 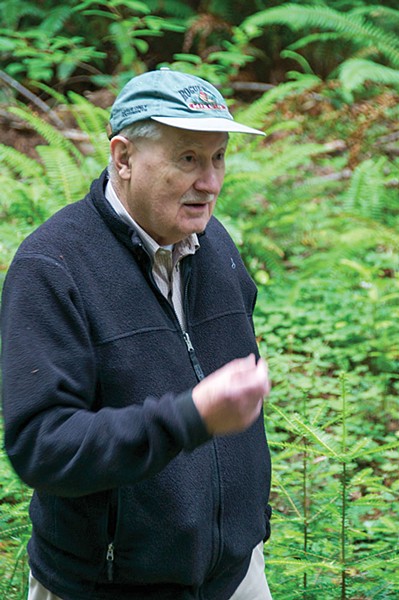 About 70 forest lovers and tree studiers gathered recently up at Humboldt State University to listen to two "gurus" of the old growth forest realm engage in a discussion about how forest stewardship can promote old-growth functions that benefit "climate, wildlife, water, and a sustained resource economy," as the Pacific Forest Trust's invitation to the lecture said. The Pacific Forest Trust is a nonprofit that works to conserve working forests (and sell carbon credits from them). Its board was in town for a meeting and to wander in the Van Eck Forest north of Arcata, a 2,200-acre working redwood forest the trust manages under a conservation easement.

And the gurus? One was Stephen Sillett, professor and Kenneth L. Fisher Chair in Redwood Forest Ecology at HSU, whose work focuses on the ecology of tall trees and their forests and has been featured in National Geographic. The other was Jerry Franklin, professor of ecosystem analysis at the University of Washington in Seattle. Franklin's research in the 1980s helped reveal the ecological importance of old-growth redwood forests to numerous critters, notably to the northern spotted owl — which led to the timber wars as environmentalists and loggers squared off. Later Franklin was one of the "gang of four" biologists that Congress commanded to solve the spotted owl problem; the four crafted a compromise that became the Northwest Forest Plan.

Andrea Tuttle, chair of the Pacific Forest Trust's board, led the discussion, asking first for a definition of "old forest." Sillett said it's a forest with a mixture of trees and woody debris, but most notably it has big trees in it — and by big he meant biomass. It's a subject he's been immersed in, climbing the world's biggest trees including eucalyptus in Australia, to measure them inch by inch, leaf by leaf.

"I got real turned on by big trees in college," Sillett said. "My interest started out as a climber; I'd climb trees as a stress releaser."

But he started seeing stuff up there in the canopy — ferns, other tree species, slugs, salamanders — and the trees themselves became interesting to him, he said. He began to wonder how long they'd been up there, how much they weighed, what their above-ground biomass was, how much wood they could make and what their growth potential was.

Franklin, who said he is nearing 80 years old, said he started out his career primarily thinking about trees.

"And the trees inspired me," said Franklin, who is also on the Pacific Forest Trust board. "But now I think about ecosystems. "We in this [Pacific Northwest forestry] community have really defined the concept of old forests for the rest of the world."

The enormous old-growth redwoods people fought to preserve here were, he said, the last frontier; everyone else had cut their old trees down.

"But it was more profound than that," Franklin said. "These forests were extraordinary: in their longevity, in their massiveness, in their dominance of evergreen conifers. Most forests in the world are dominated by deciduous trees, by the flowerers."

He said it interested him, as a young man, that other scientists ignored the redwoods and "were off studying deciduous forests and defining old forests through them."

In fact, he said, the redwoods represent a forest's great potential.

Which is where the questioning eventually turned: What is the potential of an old-growth forest — especially, Tuttle asked, in terms of carbon storage and greenhouse gas reduction? (Trees sequester carbon dioxide through photosynthesis, converting it into sugar, cellulose and other carbohydrates.) Tuttle also asked the scientists what people should be doing to help forests deal with climate change.

Sillett laid out what he'd learned about very old redwoods, and why compared with other tall-tree growing species they are the world's best carbon sequesterers. Eucalyptus trees, for instance, are the fastest growing trees in the world, he said, because they don't invest anything in preserving their bark, and they decay and shed masses of biomass as they grow old, losing as much carbon as they're fixing through photosynthesis. Look inside the oldest eucs, he said: They're hollow.

Redwoods grow more slowly than eucalyptus, but a great deal of the new wood they make turns quickly into decay-resistant heartwood, which stores more carbon. And here's the exciting thing: Sillett and his research team have determined that the oldest redwoods in the forest are the fastest growing — because they're big, he said, meaning they have more leaves. And this enables them to pack on more heartwood.

"In a 2,000-year-old redwood, 95 percent of the annual wood production is converted to decay-resistant heartwood," Sillett said.

Franklin said the old redwood forest's capacity to sequester carbon exceeds that of other ecosystems "by a factor of three or four."

Sillett made a potentially unpopular statement when the talk turned to bolstering the old forests to withstand climate change. There's talk, he said, of what happens if there's less fog in the future. But actually, he said, there's been a decline in cloud cover for years, and redwoods are thriving.

"With a decline in cloud cover there's a spike in wood production," he said. "Redwoods in Humboldt show wood production that is 40 percent higher now than it's been in the last several hundred years. The most pronounced is in Redwood National Park. ... Why? More light availability. So is that climate change?"

Climate change, in this case anyway, is not a simple "bad" thing, he said. "There's good and bad."

But both scientists agreed to the concept of restoring the complexity of forests, especially where long-term fire suppression has upset the forest balance. Franklin suggested, for carbon sequestration, having forest managers adopt longer rotations between selective cutting, and that the oldest, big trees be left alone. He ruffled some feathers when he said everybody agreed now that big trees are off the table, some in the audience taking that to mean he thought the fight to save the old-timers was over.

"There are still demands and pressures on old forests," a woman said.

Sillett suggested rethinking the rotation concept altogether, and looking instead at individual tree selection, while leaving the big trees be. He and his team are studying the effects of thinning the areas around big trees and have found that the big trees' rates of growth skyrocket afterward.