On the path, in the weeds and around the eucalyptus bark 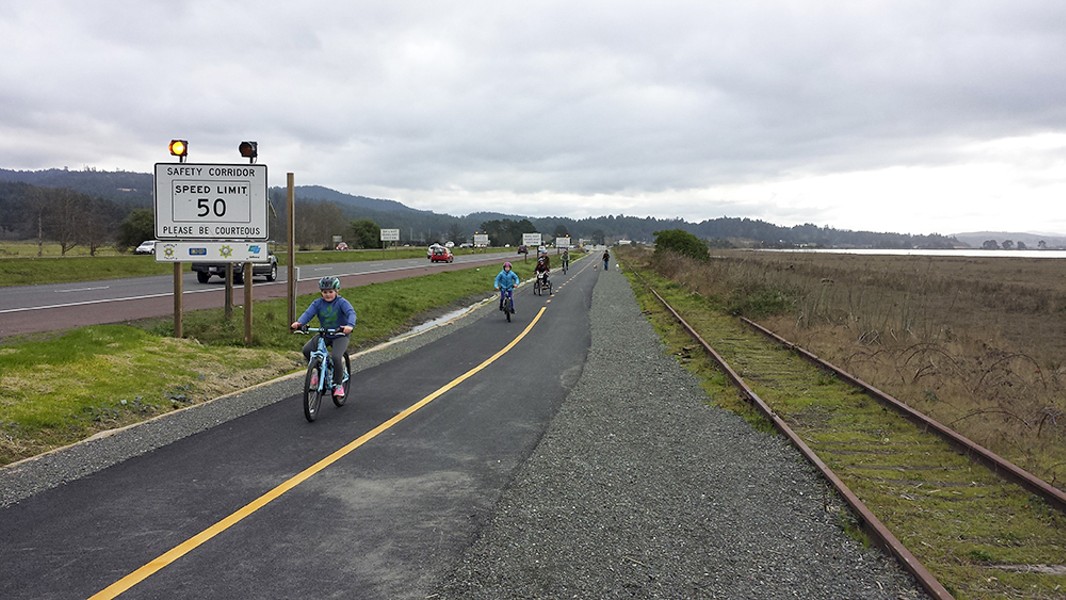 Photo by Hank Seemann Biking the new stretch of trail between Eureka and Arcata.

I used to ride my bike from Eureka to Arcata and back a couple times a week but since I no longer have a regular date in Arcata, I haven't had a chance to test the new Humboldt Bay Trail along the U.S. Highway 101 corridor. Now with this NCJ assignment, I have just the opportunity. A friend who lives in McKinleyville and I make a date to meet halfway and I hop on my bike.

In Eureka, I speed down Waterfront Drive, past the Adorni Center and Halvorsen Park, across the gleaming metal bridges and under the Eureka Slough bridge. Cycling through the Shoreline RV Park, I pass the Harley-Davidson dealership and turn right on the ramp to merge with traffic onto U.S. Highway 101 headed north.

Now I'm back on classic territory, the mauve-colored shoulder. I take a right onto Jacobs Avenue and cycle parallel to the freeway briefly, then back onto U.S. Highway 101, zipping along merrily, humming to myself. All is well in my world. I pass the mill to my left. Check. Pass Indianola. Check. And, here we are: Bracut! I'm excited, looking forward to checking out the new trail from Bracut to Arcata.

I notice the absence of a sign, though. Unless you read up about all this, how are you to know this new bike trail exists? And what about all the touring cyclists I see loaded with panniers, people who are obviously not from these parts? If they're heading north, they'll miss this great new trail.

I cross U.S. Highway 101 to Bracut, expecting to find the trail right there. Hmm. Where is it? I start to cycle the wrong way on the shoulder — not a good idea, I know, but what else am I supposed to do? It must be within the Bracut Industrial Park. So I turn around and cycle into the park, as far as I can. I come upon something I never knew existed, a faded sign saying "Bracut Ecological Marsh: a Project of the State Coastal Conservancy RCAA 1989." I glimpse the shoulder to my right, across some thistles, brush and the railroad track. The bike gets tangled in weeds and my legs bleed from scratches, but I reach the shoulder after a couple of minutes and illegally cycle north 200 yards, parallel to the highway. Then I gratefully turn left onto the new trail.

If you are cycling north, do as I say now, not as I did: Cycle to the Bayside Cutoff, where you can (carefully) cross U.S. Highway 101, then cycle with the traffic ¼ mile south and turn right onto the trail.

Soon the trail veers away from the highway. Between the wildflowers, the bay, the grass dancing in the breeze and, best of all, the absence of traffic, I feel like I'm on a country lane. I pass two women and their dogs, then a few minutes later a woman skating. I ask her to take a photo and learn she's from El Salvador and lives here with her American husband. We notice the picnic tables nearby, a nice touch. Then we part, she heading south and I north. Before long I'm passing the Arcata Marsh, then crossing Samoa Boulevard and soon I'm at the Arcata Plaza.

A couple of hours later, on my return trip, I don't have to take my life into my hands crossing the highway. Cycling under the eucalyptus trees, I take particular note because of the recent decision by the Humboldt County Board of Supervisors to remove more than 200 of them. I see some detritus from the branches but nothing that isn't easily avoidable. As a cyclist, I'm baffled by the intensity around this heated issue and think the decision is a gross overreaction.

Reaching Target, I access the bike path from the back of the parking lot and from there it's a straight shot home.

The trail is a terrific start

I will be cycling much more often to Arcata now that we have it. Fingers crossed that the state funding the county has applied for comes through. In the meantime, I recommend a sign be placed at the Bayside Cutoff heading north to alert cyclists of access to the trail there.

Louisa Rogers has been riding a bike for more than 50 years and has no plans to stop.