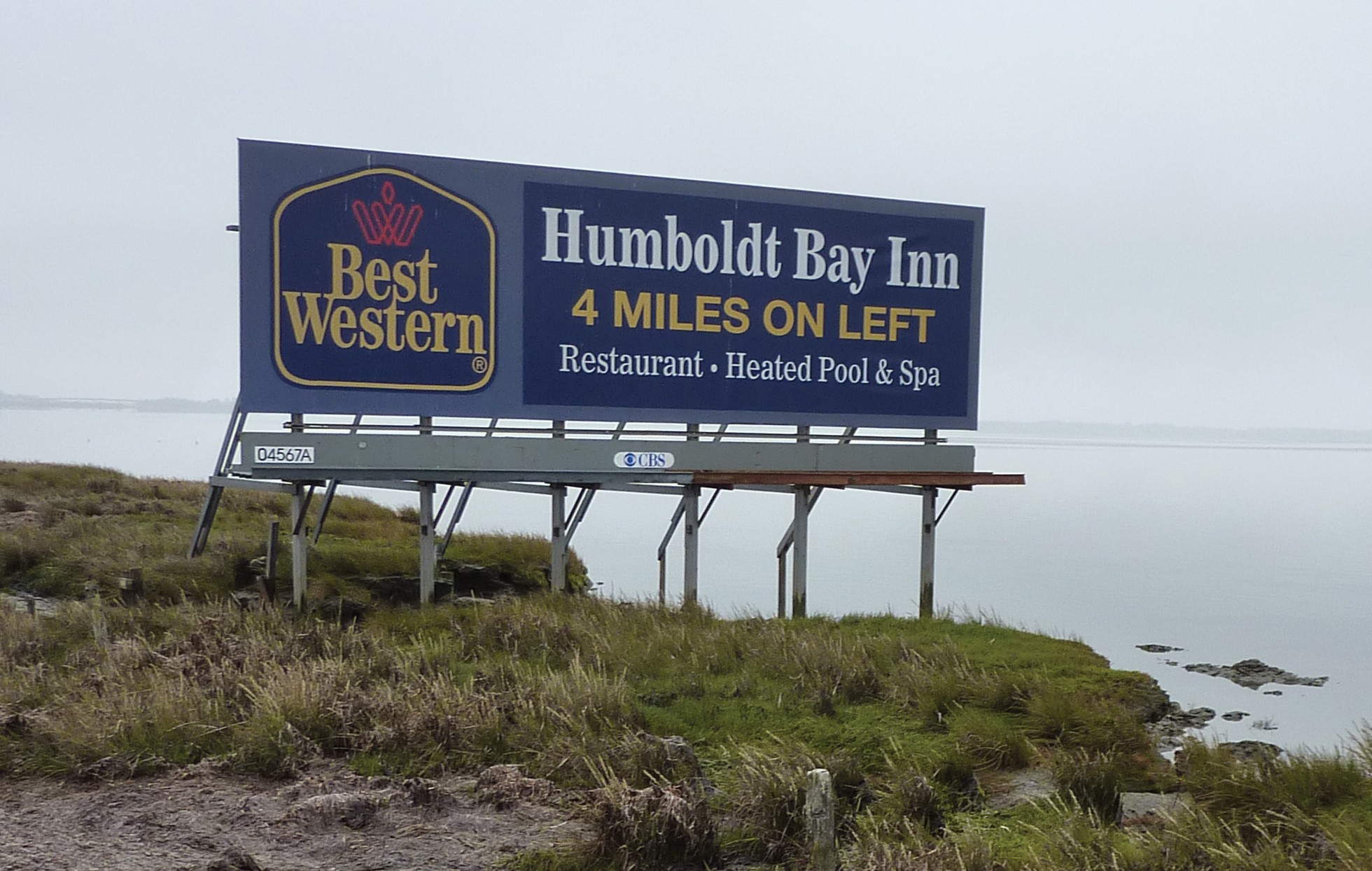 Christopher J. Neary, legal counsel for the beleaguered North Coast Railroad Authority, sat before the agency's board of directors last week at their regular monthly meeting and said it was time, at long last, to get those ugly billboards torn down. There's close to 30 of these massive, tacky planks littering the corridor between Arcata and Eureka, most blocking handsome views of Humboldt Bay. Only nine of them sit on NCRA property, but that's better than nothing, Neary said. He informed the board that he was prepared to file a lawsuit that very day against CBS Outdoor, the New York City-based corporation that owns the signs. And the board didn't even need to authorize the suit, he said; they'd already done so back in 2006.

The effort to remove billboards along that stretch of highway dates back further than that -- much further. Dan Hauser remembers tackling the issue with Wesley Chesbro shortly after the two men were elected to the Arcata City Council in 1974. "We both disliked billboards," he said in a phone interview Monday. "We believed they were a blight." Under their leadership, the council held public hearings to address the ads within city limits, and with overwhelming public support, the city banned billboards. Shortly thereafter, they notified the billboard company (whichever one it was at the time -- ownership has changed mega-corp hands over the years among the likes of CBS, Viacom, 3M and Outdoor Systems) that the signs must be removed. The company's reaction? "'Stick it in your ear,'" Hauser recalled. "We threatened legal action, but we never had the resources to go through with it."

Thus it has been, not just for the City of Arcata but for nearly any the other agency or jurisdiction that has taken on the billboard battle. The signs in question, most of which were originally authorized in the 1960s by Southern Pacific Railroad (whose rights-of-way allowed them to side-step the state's Outdoor Advertising Act), earn rent for a number of property owners, including private landowners as well as public agencies like the NCRA, the U.S. Department of Fish and Wildlife and the California Department of Transportation. Over the past 35 years, many of them, responding to public outcry, have sought to negotiate removal, but repeatedly the corporations have stood as firm as their signs.

"Most people will tell you that the billboard industry is extremely tenacious," NCRA Executive Director Mitch Stogner said Monday. "They fight like a junkyard dog." The leases for many of the billboards are long-expired, but the billboard companies keep sending checks, and cashing them implicitly extends the lease. Such was the case with the NCRA for years until the mid-1990s, when they stopped cashing the checks -- only to start up again a few years later when the agency was strapped for cash. Though still struggling financially, the NCRA stopped cashing the checks again in 2006. Sue Leskiw, president of Friends of the Arcata Marsh, said at last week's meeting that Fish and Wildlife has tried the same tactic -- refusing payment while demanding removal -- to no avail.

This stubborn noncompliance extends to the courtroom. A decade ago, Viacom sued the City of Arcata along with Hauser, then city manager, for requiring a conditional use permit to rebuild a sign that had blown over in a windstorm. The company won the initial case but lost on appeal. Regardless, whenever a sign falls down it gets rebuilt in a matter of days, without the legally required permit. "It's pretty clear that the billboard companies are very comfortable with litigation," Neary told the NCRA board during his presentation. Current laws effectively reward this litigious approach. In a recent editorial, the L.A. Times endorsed stricter legislation -- SB 1470, Representative Mark Leno's bill to reform the Outdoor Advertising Act -- saying that under the current system, billboard companies have a simple choice: "make lots of money by breaking the law ... or be law-abiding suckers." (A call to CBS Outdoor was not returned.)

While opposition to the billboards is widespread, it's hardly unanimous. Many business owners, for example, consider them a necessary, if unsightly, component of the local economy. "The thing is, I agree it's an aesthetic eyesore," Redwood Harley-Davidson owner Rockey Poole said of his company's large sign on the bay. "But with business and the economy the way it is, I think we have to make some accommodations." A sign he formerly rented south of Eureka was removed a few years back thanks to efforts from the group Keep Eureka Beautiful, whose name Poole finds ironic considering that the view revealed by the sign's removal was of the pulp mill. ("If they wanted to call it 'Beautify Eureka' I might go for it," he joked.) Poole said his sign may not sell motorcycles, but it does bring in tourists looking for T-shirts and knickknacks, which helps keep his business afloat during the lean winter months. With many local businesses struggling to pay employees and taxes, the view can't be the only consideration, Poole said. "I mean, asphalt's not very pretty either, but I think it's necessary."

In the closed session that followed the public hearing, the NCRA board elected to follow the advice of Harbor Commissioner Mike Wilson and Timber Heritage Museum President Marcus Brown by delaying filing the lawsuit for 30 days in the hopes of convincing other agencies to join the fight. Humboldt Baykeeper Program Director Pete Nichols told the Journal on Monday that the environmental group would "definitely consider" joining the suit, despite its pending lawsuit against the NCRA and others over the Balloon Track cleanup. City of Arcata Environmental Services Director Mark Andre said that while he couldn't speculate on the city's willingness to join litigation, its general plan places them in agreement with the NCRA on the issue. Other agencies that have expressed interest in billboard removal in the past include the Sierra Club (which had a representative at last week's meeting), the U.S. Department of Fish and Wildlife and Caltrans.