Cleaning up pelicans one bird at a time -- but for what? 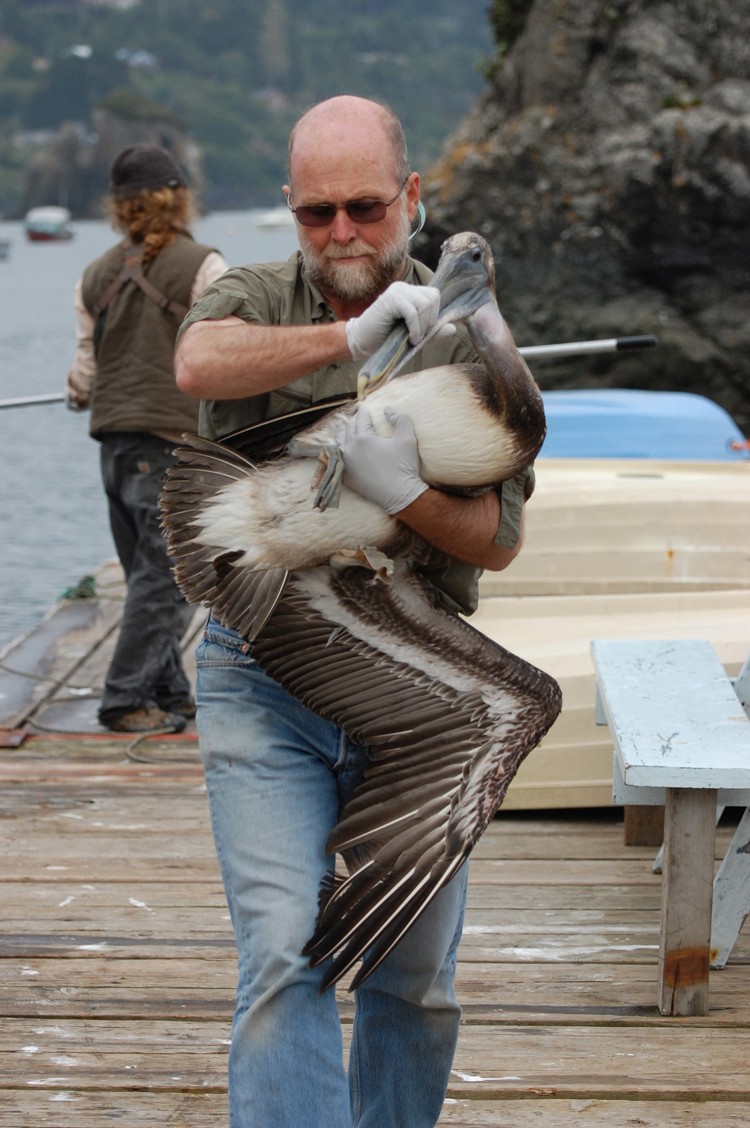 Fish-oil-soaked pelicans are being cleaned, fundraisers are being held and a rehab aviary is planned -- but no one really knows how much good any of it is going to do.

It's been almost 20 years since anyone looked rigorously at how well California brown pelicans survive after oil spill cleanups, and those results were pretty dismal -- the cleaned birds didn't breed or live normally.

Fish oil is less toxic to swallow than fuel oils, but both can kill by robbing a bird of its natural insulation.

Nobody has ever studied how pelicans rebound from being contaminated with fish oil, according to Dan Anderson, who ought to know. He's a co-author of that earlier oiled bird research, and a UC Davis emeritus professor of wildlife biology. Anderson has spent four decades observing the California brown pelican, monitoring its breeding grounds in Baja and tracking the population rebound that got it removed from the endangered species list.

For the species as a whole, "it's open to question" whether treating and releasing individual injured pelicans makes any difference to overall population size or robustness, Anderson said.

A more recent study of oiled penguins was more promising, showing that some rehabilitated birds did return to breeding sites and reproduce, "but penguins are tough," Anderson said, a sort of poster child for rehab.

Beyond that, "I don't want to say anything positive or negative about rehabbers," he said over the phone last week. "That's been a controversy: Is it worthwhile?"

Anderson stressed that the moral question -- should people try to help animals injured by human industries or human carelessness -- shouldn't be confused with the factual question of how effective that help might be.

For Monte Merrick, the issue is simpler.

"I'm really rooting for the bird that's in my hand," he said. "Every bird that we release is a bird that was going to die that didn't die. At least not now."

Merrick is co-director of Bird Ally X, and he agrees with Anderson that no one has tracked effectiveness of the kind of cleanup he's doing in pelicans. Even so, he flared briefly and then apologized last week when he was asked about the impact of the group's efforts to clean up and fatten up around 200 distressed pelicans.

Sorry to sound defensive, he said, but too often that's a question that's only posed for spin.

"We face this all the time, being told that wildlife rehabilitation is a waste of time and a waste of resources," Merrick said. "The thing is, it's not public money." It's gifts from people and institutions that want to see each bird cared for.

And the gifts keep coming. Two separate Arts Alive! venues held fundraisers for pelican rescue on Saturday, and Ocean Night organizers told Merrick they'll donate all proceeds above costs from last week's event to helping the birds. Another fundraiser is in the works for late August at the Blue Ox Millworks, he said.

On Friday, Merrick pretty much cleaned out the group's checking account to pay Humboldt County $2,100 for a coastal zone permit needed to build a temporary recovery aviary in Manila. The cleaned birds need to heal and fatten up in an aviary where they can demonstrate that they can fly and dive successfully. Since the existing aviary can only hold about 30 recovering birds, the lack of anything bigger is seriously backing up cleanup and release operations.

Meanwhile, Merrick and his allies have pushed and prodded to get fish cleaning stations to stop leaving oily heaps of waste in places where birds can become dangerously mired in it. So far, from Crescent City to Shelter Cove, that seems to be helping, Merrick says.

Pelicans have a rough life. About half of the fledglings -- 40 percent to 60 percent -- will die in their first year, according to pelican expert Anderson. Higher numbers have floated around. In an especially bad year, mortality can hit 80 percent, said Jay Holcomb, director emeritus of International Bird Rescue, which has rehab facilities in the Bay Area and Southern California.

That group has taken in more than 400 pelicans, and it's been backpedaling from a note Holcomb wrote saying that "the cost of caring for these birds is prohibitive and causes a great strain on our organization."

Holcomb says the note was only intended for other rescue groups, but it ended up being distributed more publicly in the Humboldt area, causing some tension between rescue groups. In it, Holcomb urged the public and wildlife rehabilitators to "leave starving fledgling pelicans alone when possible and not rescue them unless absolutely necessary."

This year, the birds likely are in crisis because of problems with their food supply in Southern California, according to another pelican biologist, Deborah Jaques.

There are reports of pelicans straying far inland, getting tangled in fishing gear, getting oiled by fish waste, and even attacking baby murres to shake the fish out of them.

"These things are starving and they're doing anything they can to survive," said Pat Higgins, a Humboldt Bay Harbor commissioner. Higgins suggested a popular theory -- that birds have rebounded so far that now we can expect their population to crash.

"There's a natural cycle here," he said. "It does seem that their abundance may have outstripped the carrying capacity."

The population boom-collapse notion is dismissed by biologists who have studied the birds. Based on what he saw in the Baja breeding colonies, Anderson said, this is really just a normal year for California brown pelicans. Jaques has seen other data that makes her suspect there were unusual food shortages in southern California, stressing the birds as they migrate north. But it's hard to get the full picture about pelicans.

"They're probably one of the least monitored seabirds off the California coast," Jaques said.

She too, is loath to offer an opinion about the broader efficacy of pelican rehab, "but I will say the public kind of demands it."

What's most pressing, she said, is to eliminate practices that needlessly harm the birds, like improper disposal of fish waste.

And although there is no data showing how the released birds do compared to other pelicans, this year Bird Ally X is banding the fish-oiled pelicans it treats. So in time, it might at least get some band returns that could show how far individual birds traveled or how long they lived.