Birding at the Arcata Marsh 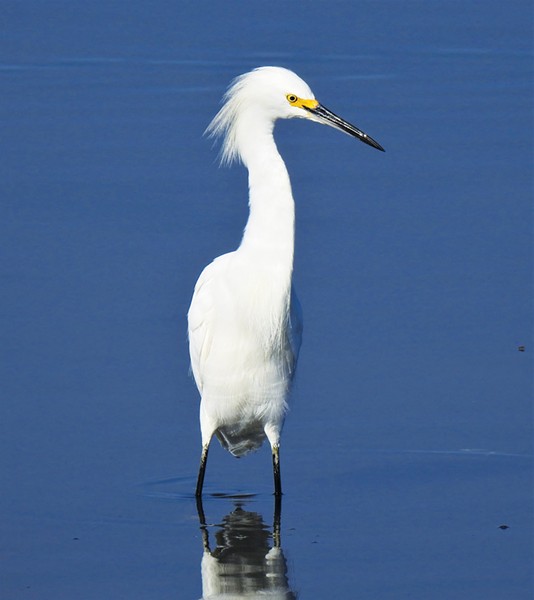 Photo by Sarah Hobart A snowy egret at the Arcata Marsh.

Humboldt County has more than its fair share of great places to go birding but one of my very favorites is the Arcata Marsh and Wildlife Sanctuary.

It's not just that it's chock full of birds — 342 different species have been recorded there, and during spring and fall migrations flocks of shorebirds literally fill the skies like fast-moving clouds — or that it serves a dual role as both a sanctuary and an innovative wasterwater treatment facility. In a word, it's accessible: to birders from novice to expert, and also to people of wide-ranging physical abilities. The Arcata Marsh is simply a perfect place to go to the birds.

Nearly 5 miles of trails wind through the sanctuary's 307 acres of diverse habitat — saltwater, freshwater and brackish (a mix of salt and fresh) marshes, grassy meadows, tidal sloughs, mudflats and bay — so it's easy to step away from the bustle of human activity and into quiet spaces where marsh wrens skulk in the understory and snowy egrets hunt in the shallows. A wheelchair-accessible section of the Humboldt Bay Trail runs past Mount Trashmore, a grassland built atop the former city dump and now home to sparrows, buntings and finches. And numerous pullouts along South I Street, the marsh's primary access road, make it possible to explore a variety of habitats by car.

If you're new to the marsh or to birding, a good place to start is the Arcata Marsh Interpretive Center at 569 South G St. The center offers a wealth of information on avian life at the marsh, including maps, field guides and a take-along checklist of the species you might find there.

Just steps from the center is a self-guided tour of Butcher Slough log pond, a gentle and level 3/4-mile walk around a restored freshwater marsh with remnants of the old lumber mill still visible. It's prime habitat for dabbling ducks like teals and gadwalls and the overhanging willows provide good cover for warblers, flycatchers and the occasional Bullock's oriole.

Another popular route takes you around Klopp Lake, a human-made freshwater pond that hosted brown pelicans in record numbers last year, or you could wander between the three treatment marshes where microorganisms and native flora help filter Arcata's wastewater. A more ambitious trek is out to the oxidation ponds with some incredible views south and west over the bay. I saw my first burrowing owl in the rocks along that trail.

Longtime interpretive center staffer George Ziminsky says the marsh's network of trails is one of the reasons it's a great place to bird. "There are a lot of cool, hidden spots that are visually accessible. ... [The marsh] contains such a wide variety of habitats within a relatively small footprint and there's easy access by car, bike or even walking from town."

His favorite bird is the green heron, a small, elusive heron with striking russet and green plumage. One year, he says, a nest near the Interpretive Center produced a brood of fledglings — still sporting some baby down — that ran around the trails on foot. "They were a lot of fun to watch."

Ziminsky also holds the honor of spotting No. 341 on the all-time marsh list, a gray catbird. No. 342 was a beautiful yellow-throated warbler that showed up in the pines at the foot of I Street last summer, to the delight of many.

Sadly, I dipped on the warbler — birder slang for chased but failed to see — and also on the catbird. So it goes in birding: Timing is everything.

But I was there in 2007 when a tufted duck brought flocks of birders to the marsh. The Eurasian vagrant is a North American Code 3 rarity, meaning, "Drop what you're doing and go," in bird-speak. And in 2019, when six magnificent trumpeter swans splashed down in Humboldt Bay just west of the I Street parking lot, I arrived in time to see them without committing a single moving violation.

But it's not always about the numbers. The marsh is also the perfect place to put the "watching" in birdwatching. Once I was captivated by the sight of hundreds of Least sandpipers wheeling over the bay, their wings glinting like diamonds in a constantly shifting pattern. Suddenly, a peregrine falcon shot into their midst and with a few deft maneuvers separated one tiny bird from the flock. A split-second before it was snatched out of the air by sharp talons, the sandpiper dropped in the grass and vanished. It was heart-pounding drama.

And a few weeks ago I was cooling my heels in the middle of a hailstorm when I spotted a belted kingfisher hovering over McDaniel Slough. Its fluttering wings held it perfectly still until it plunged into the murky water, coming up with a silvery minnow in its bill and downing it in two gulps.

The marsh is a vibrant example of how humans sometimes get things right and a testament to some visionary thinking: It's treasure from trash, a restored coastal wetland teeming with life that continues to thrive when so much of California's coastal wetlands are gone.

Every Saturday morning for as long as I can remember, the Redwood Regional Audubon Society has sponsored a nature walk that starts at the foot of I Street. The group is led by local experts, the pace is dictated by the presence of birds (i.e. usually a slow shuffle) and the ambiance is welcoming and kind. When I moved to Humboldt County 23 years ago, I was a regular on the nature walks. I saw some cool birds and met a lot of great birders. No one cared that I mixed up my buffleheads and mergansers, or that I couldn't tell a dowitcher from a willet. It was a perfect introduction to the birds and the people of Humboldt County, and one of the reasons I stuck around. Though the pandemic put the walks on hold for a bit, they're back on, with the usual COVID precautions of masking and distancing.

If you haven't visited the marsh lately, go. And take your binoculars.