Look your dinner in the eye. Photo by Carolyn Lehman 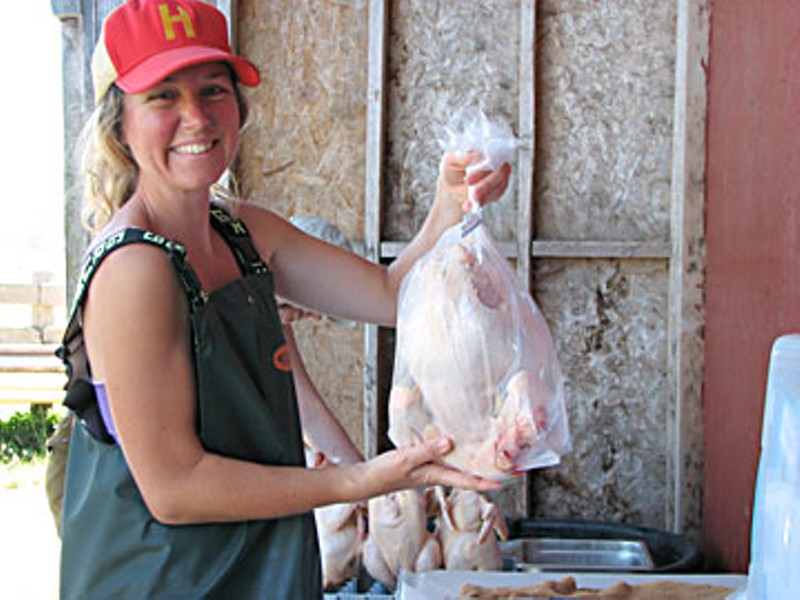 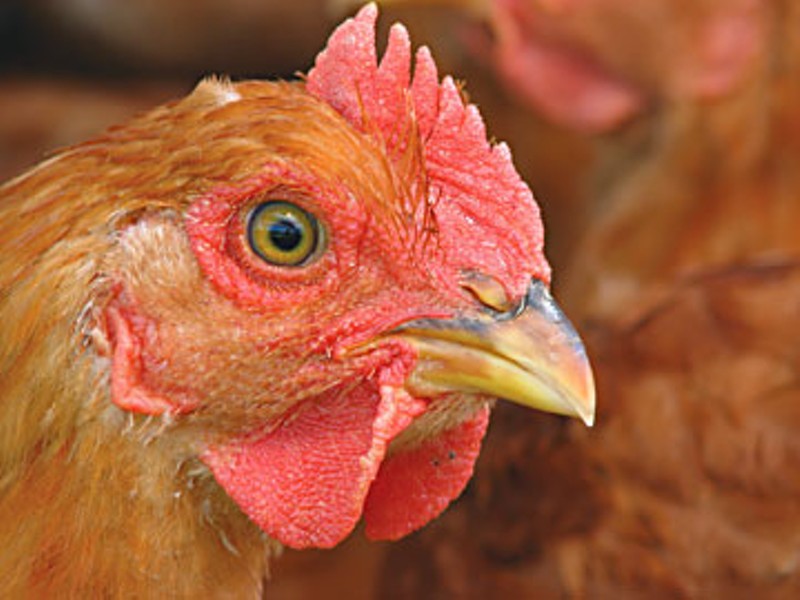 "Hello everyone, today was a beautiful day out at the farm. The sun was warm, the air calm, and 102 new little broiler chicks were introduced to the fresh green pasture. Over the last few weeks, activity on our farm has been chuggin' along as the season marches closer to Summer Solstice -- the longest day of the year."

This June e-mail was my captivating introduction to Sara Brunner, and her Wild Chick Farm, the business she runs with her husband Matt in the Arcata Bottoms. As a former vegetarian and reluctant omnivore, I was curious to see how the idyllic description of chicks frolicking on a sunny day in a green pasture reconciled with the slaughter and evisceration of the grown birds she called broilers.

Upon meeting Sara I learned she and her husband were once vegetarians concerned about the inhumane and environmentally unsustainable practices of commercial poultry production. Over time they became aware of the possibility of having their ethics and chicken, too -- that poultry could be raised with humanity, integrity and attention to the environment. Sara and Matt broke their poultry fast by eating a meal of a chicken they had raised and slaughtered themselves.

People become vegetarians for many reasons: health, respect for animals, concern about the mega-meat industry and its worldwide impact on the environment. Frances Moore Lappe’s Diet for a Small Planetfirst alerted us to these issues. In the ’70s my 20-something peers and I believed not eating meat would help save the planet.

For years I’ve felt conflicted about eating meat -- I didn’t think I could kill an animal. Going to the Wild Chick Farm afforded a chance to become closer to the food I consume and to better understand where it comes from.

So I went to see how chickens die. At the farm, Sara led me to where Matt and their friend Kevin Cunningham, a fellow local farmer, were killing the chickens. I came upon three birds hanging upside down in inverted metal killing cones, bleeding, their heads sticking out of the opening at the tip of each cone. Two birds were still; one was twitching. Matt explained that they begin by making a slit on each side of the main artery, where the blood goes to their heads as it drains out of their bodies. This puts the birds to sleep. The trachea is not slit, as that could cause the animal to choke on its own blood. The twitching, he assured me, was involuntary muscle spasms, not conscious struggling birds. The entire process averages 30 seconds to a minute.

The chickens’ heads grew pale. The Brunner’s method makes for a humane kill; this ain’t the chicken that ran around headless in the barnyard after your grandmother whacked it; this is not the factory-bred bird shackled onto a conveyor belt and shocked with an electric stun gun. This is a locally-grown, pasture-fed bird, raised on a mixture of organic grain and pasture grass, hand-killed and eviscerated on-site, made ready for your table by members of your own community.

We headed over to a large vat where the freshly killed birds were scalded for about a minute at 160 degrees to loosen their feathers before being plucked in another device, emerging reminiscent of the naked chickens in old Warner Brother cartoons. This spinning process, surprisingly, takes just a few seconds. Next we stepped under a tarp to the evisceration tables, where five women were happily (yes, happily) gutting the birds under Sara’s expert eye.

For the business to grow with the overwhelming demand for pasture-raised chicken meat, the Brunners need to have access to a state certified poultry processing facility, which is required if they are to sell to markets and restaurants, anywhere other than their farmstand. Last year Wild Chick Farm won $25,000 in the Eureka Reporter’s Economic Fuel Competition by submitting their business plan, which included designs for a certified processing facility. Using Washington State’s model for a low-cost mobile processing unit (MPU), they have been working with Humboldt County Department of Environmental Health and the State Department of Agriculture on adapting the unit to meet California regulations.

The MPU has the advantages of mobility, reduced infrastructure cost and no land cost. It can go to the chickens rather than the chickens going to the processing facility. Sara took me inside their trailer-like vehicle with stainless steel walls dividing it into two rooms. When complete, the chickens should be defeathered and scalded in one room, then passed through a window in the wall into the other room, where two eviscerators will complete the job, all according to Board of Health Standards. Exactly what was happening outside at the farm will occur in the trailer when the MPU is completed. The process will be enclosed and more efficient.

The Brunners envision a farmers' cooperative, the MPU traveling farm to farm on slaughter day. A cooperative could split other costs, too. The chickens Wild Chick raises -- Red Broilers -- come from pasture-based genetic stock raised in France, sent to the East Coast then here. It would initially cost $15,000 for Sara to buy her own parent stock and breed her own chicks, costs that could be split among other farmers if the interest is there.

Organic feed is another big expense. At this time, organic feed is not grown in California and must be shipped from the Midwest. Every other part of the operation is local.

The problem for some may be the price. At $6.50 a pound, the broiler I roasted last night came to $30. I think it was worth it. I'd rather serve less meat and buy it from vendors whose practices resound with my values. With oil prices and the toll non-ecological practices take from the earth, communities need to produce sustainably and buy locally as best they can.

Humboldt County, with its long growing season, farmers, artisans, and forward thinking populace, is a perfect area for Sara Brunner’s goal of a cooperative of pasture-raised poultry farms to be realized.

Here's how I cooked my bird, using a lower temperature and cooking for a longer time to assure a juicy chicken.

Season inside and out with salt.

Cut a whole onion into chunks.

Place the bird in the pan, breast side up.

Stuff the cavity with lemon ends, herbs, and a few onion chunks.

Place potatoes, remaining onion and garlic around the chicken.

Place lemon slices under the wings and thighs, and all over the bird.

Sprinkle with olive oil and the remaining herbs.

Cover with foil and cook for an hour, then baste with pan juices.

When the meat reaches 165 degrees, remove from oven.