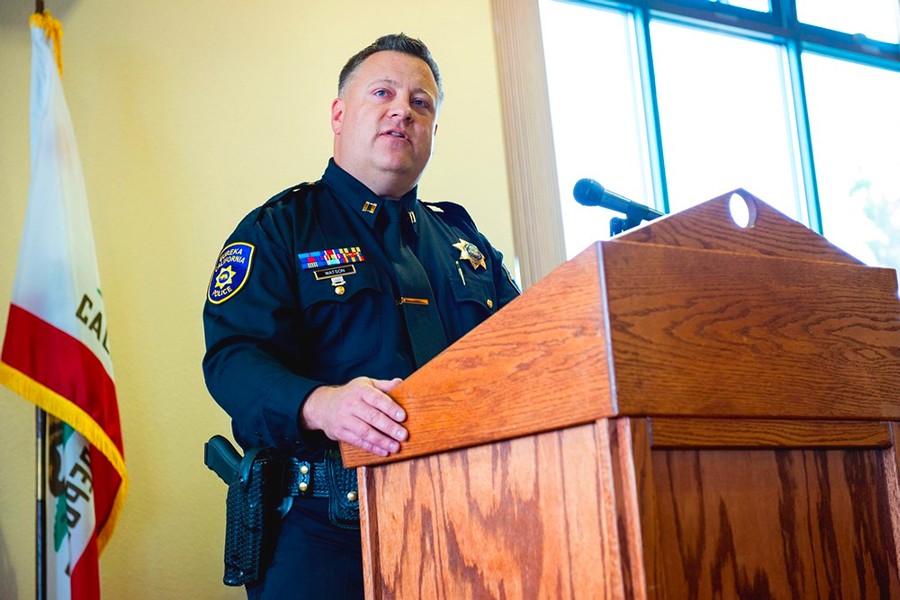 Photo By Mark McKenna EPD Chief Steve Watson has announced he is retiring at the end of this month.

After nearly a quarter-century in policing — the last 16 years in Eureka, with the last four as chief — Eureka Police Chief says he'd been thinking a lot about the need to step back, to focus on family and shift gears.

"Originally, I'd planned to wait longer and do it sometime in the next one or two years, but it just became clear to me that now is the right time," says Watson, who publicly announced his retirement Oct. 27, a day after he'd informed City Manager Miles Slattery of his decision. "Like many major decisions in life, it was multi-layered and not made lightly. It's time to take a step back, to put my family first and to move on to the next adventure."

Watson's announcement came just weeks after the city received a highly anticipated report from a Bay Area law firm hired to investigate the text message scandal that rocked the department earlier this year when first reported by the Sacramento Bee. With the report enmeshed in a legal review by another outside law firm and city leadership, some have questioned whether Watson's retirement is related but the chief is adamant it is not.

"There are no health issues, no family problems, no scandal and it has nothing to do with the investigation. There's no hidden smoking gun," he says with a chuckle. "My service has been characterized as exemplary through all performance evaluations."

In fact, Watson says, he specifically asked investigators with Sacks Ricketts and Case which, according to billing records, had spent more than 360 hours on the texting investigation as of the end of August — to look at his leadership and that of the department's command staff as a part of the probe and "it found no issues there."

"You're not going to find anything in [the report] that reflects poorly on my leadership," he says.

The truth, Watson says, is that in 24 years, he's given a lot of his life to policing, especially over the last four years, during which he's been on call 24 hours a day, seven days a week to field phone calls, text messages and emails to help the department navigate what he described as an "unrelenting series of crises," from unprecedented Pacific Gas and Electric Co. public safety power shutoffs and the police shooting of a military veteran in the midst of a mental health crisis, to Black Lives Matter protests in the wake of George Floyd's murder and, most recently, the texting scandal along with the unique public safety challenges brought by the pandemic. In addition to the challenges of the job, Watson says three of his five kids — a high school senior, a 12 year old and a 9 year old — are also still living at home and he looks forward to being more available — and emotionally and mentally present — for them, while also continuing work on a master's degree in public safety leadership.

Watson says he's intensely proud of the work he's done at EPD and what the department has accomplished during his tenure, saying EPD has continued to work toward a culture change that prioritizes community service and officer wellness, adopts industry best practices and prioritizes community trust and accountability. When the city of Eureka issued a press release announcing Watson's retirement, it included a two-page list of his "career highlights and accomplishments."

The list included Watson's work helping to organize the Mobile Intervention Services Team, a partnership between EPD and the Humboldt County Department of Health and Human Services to provide outreach and services to homeless residents with severe mental illness, and the city's award-winning Community Safety and Engagement Team, which works with community partners in an effort to balance "accountability" with "compassion" in working to find long-term solutions to homeless issues in the city. Watson also outfitted all EPD's officers with the anti-overdose medication NARCAN, noting it helped 24 people survive overdose events over a two-year period. He also worked to bring de-escalation and crisis intervention trainings countywide, while implementing implicit bias, principled policing and procedural justice trainings at EPD.

But it's also undeniable that Watson is stepping away from the department amid a period of turmoil, as it faces both the culmination of the texting scandal and a staffing crisis.

The department has been roiled by controversy since the Sacramento Bee published its explosive report in March, detailing a host of vulgar, misogynistic, violent and dehumanizing text messages sent between a group of officers led by Sgt. Rodrigo Reyna-Sanchez. (The Journal later confirmed the authenticity of the texts leaked to the Bee through California Public Records Act, which unearthed additional incendiary messages.) In the article's immediate aftermath, Watson placed Reyna-Sanchez and officer Mark Meftah (who has since left the city's employment) on leave, and hired the Bay Area law firm Sacks, Ricketts and Case LLP to conduct an independent investigation. EPD Capt. Patrick O'Neill was also placed on administrative leave in May, pending the findings of an investigation, though it's unclear if that's related to or independent of the texting investigation.

Slattery tells the Journal the city received the final, nearly 200-page draft of the investigation report "two or three weeks ago," complete with attachments, recordings and other supporting materials

While Slattery says that he, Watson and City Attorney Bob Black have reviewed the document, it's also being reviewed by outside counsel, the Sacramento law firm Liebert Cassidy Whitmore.

There are two aspects to that review, Slattery says. First, he said the firm is reviewing the investigative report simply to make sure its findings are supported by the evidence collected during the investigation. Then, Slattery says, the city has provided the firm with potential disciplinary actions the city is looking at taking based on the report's findings, and Liebert Cassidy Whitmore is reviewing those to advise the city about whether they are legally defensible based on the report's findings and applicable state law. (Watson, for his part, says the proposed disciplinary actions were put forward with his input.

Both Slattery and Watson describe the firm's investigative report as "comprehensive" and "thorough." Neither could offer a timeline for the legal review to be complete, but Watson says he agreed to stay on as chief through November with the hope of seeing the process through to completion.

Slattery says the city will endeavor to be as transparent as possible about the report and its findings, but until the review is complete he's extremely limited in what he can say.

"I'd love to be able to speak more freely but, unfortunately, I can't," he says. "But we've taken this extremely seriously and want to make sure we do what's right."

Watson's departure also comes as EPD is struggling under the weight of a regional, statewide and national police staffing crisis, which recently saw the department operating with 25 percent of its officer positions vacant, necessitating mandatory 12.5-hour shifts and overtime. Speaking to the Journal on Nov. 2, Watson concedes this will be an ongoing issue but reports a bit of good news, saying a new officer has nearly finished field training, while the department recently welcomed a lateral transfer from another agency and has conditional job offers to three cadets in the police academy. Plus, he says, EPD has brought on two new dispatchers.

"We are making some progress," Watson says.

Almost a week removed from his announcement but with four weeks remaining on the job, Watson is asked how he's processing it all. He says he's grateful for the support he's felt via notes, text messages and phone calls from the community and within EPD, but it's a lot to contemplate. Watson says he was adrift when he entered law enforcement with the Santa Cruz County Sheriff's Office in 1997. He'd gotten a ministerial degree in theology, earned a teaching credential, worked as a substitute teacher and spent a couple years in the U.S. Army. He's now spent most of his adult life policing, but is ready to find what's next, whether it be teaching, consulting or something else entirely.

And as he changes course, Watson says he's keenly aware that while he's very proud of his 16-plus years at EPD, the department has more work ahead.

"This is not easy for me," he says. "My nature — my gut — has just wanted to continue on until everything is unicorns and rainbows, but who knows when that will ever be. But it's time. It's bittersweet with mixed emotions. I'm going to miss the people. I'm going to miss the engagement with the community. I'm going to miss being a law enforcement officer — that's been my entire career. ... But I'm starting to think about the possibilities of what it means to not be tied to two phones and on call 24/7, 365."