And the work of allies during and after the protest 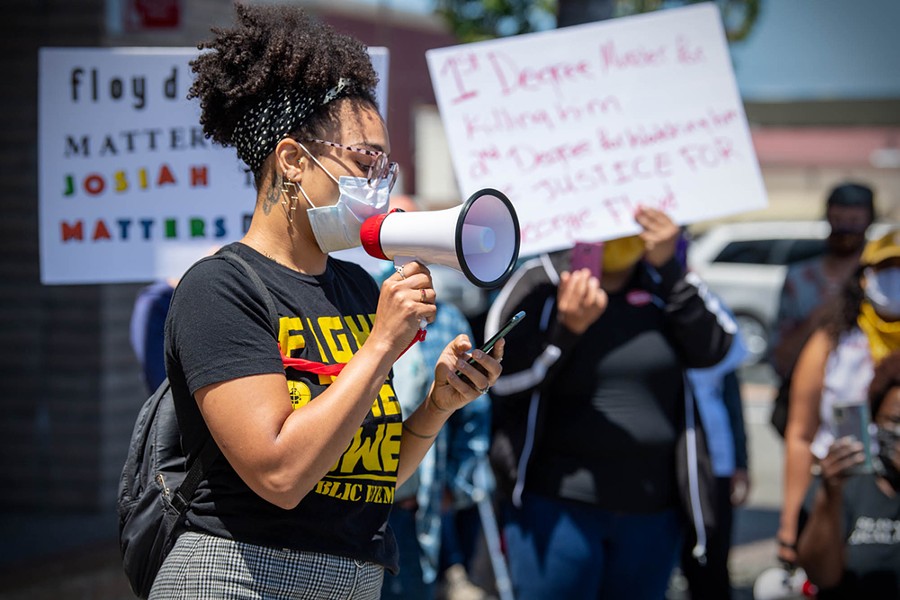 The following a speech delivered at the Black Lives Matter/George Floyd protest on behalf of Black Humboldt at the Eureka Police Department on June 1, 2020.

Hello everyone I am Mo Desir and I am a volunteer organizer for Black Humboldt, one of the only Black-operated and Black-oriented organizations in this region. Black Humboldt is not a politically driven organization but we do support and prioritize putting Black voices and stories at the forefrent of Black movements across the country and in Humboldt County. I am here today as a Black woman, as a bi-racial woman, as a Black mother and as a Black Humboldt County community member. It is humbling to see the amount of support these demonstrations and this cause have gotten over this past weekend. I thank those who have wanted to be a part of the change, who wanted to aid in supporting us through these hard times, but these stories are nothing new — the deaths of Black bodies caused by police brutality and the structure of the police state this month are small numbers in a very large, long list that's been adding names since segregation. Aubrey Ahmad, George Floyd, Breonna Taylor and Tony McDade all lost their lives in the last 60 days. We can't forget that we are also losing our Brown and Indigenous communities to these same forces.

Recognizing these tragedies as they happen, holding space for them, holding space for our Black community to feel through these moments are important, and even more important in areas like Humboldt County, places that are predominantly white or white-passing People of Color. Oppression here doesn't look the same as it does in other places: it's quiet, it's shrugged off, it's dismissed as ignorance or a sense of pride. But for those of us experiencing the oppression, the micro-aggressions, the ignorant phrases, the side eyes and the fear, it's not any of those things — it's in our faces every day in most of the places we go within our own community. This community's majority has a lot of work to do and I'd like to think that if you are a non-white person, regardless of your background, here today listening to these words, you're here because you want to create, sustain and maintain this change we speak of into our community.

The more important actions for change come after the protest and it's not just demonstrating. We need structural rebuilding, we need black and brown businesses to flourish, we need Black and Brown representation in our city councils, our city offices, our schools and higher education offices. We need to praise, respect and uplift the Black and Brown professionals and community members we already have! We need equity education past syllabi and diversified storybooks, we need tangible trainings and courses for educators and students.

Ally-ship goes further than showing up for protests — it's standing in solidarity even when the media isn't advising us to do so, or local organizations are making calls for demonstrations. It's creating diversity efforts within your businesses, schools, community events, or at work, it's considering the viewpoints of identities you don't belong to, it's asking what is needed instead of assuming, it's intervening during racial fueled situations, it's recognizing you have privilege amongst the systematic structures in our country and using them to advance the oppressed. It's starting a conversation with your neighbor who hangs Confederate flags. It can be as simple as giving space to those oppressed to heal or process trauma without your intervention, opinions or input.

Allies play an important role during protests and that role is mainly to keep Black bodies safe. Position yourself on the outside of protest groups, head to the front lines when confronting law enforcement, maintain communications amongst each other, have a plan for maintaining peace between Black protesters and law enforcement, give those affected space to process without your interjections and allow them to take up space, take up talking time and being heard over yourself.

The police state structurally has never supported, helped or aided the Black, Brown or Indigenous communities, we as a whole have actually learned to avoid them, fear them, and to never seek help from them, although this is what the system was created to do, serve and protect. Instead we see school-to-prison pipelines in inner cities occupied by Black and Brown bodies, we see peace met with aggression, we see Native land being stomped over and ripped from the hands of those it belongs to, and we often see the misuse of power. As a community with few cases of police misconduct we look to our own police staff to set an example, to weed out the police that may be clouded by misjudgments, biases, generalizations and race-based decision making that we know come from the white Supremacist infrastructure of our county. We saw many of these officers being at one with the protest by day and we also saw a numbers of folks met with hostile tactics by night. So today we ask for transparency, we ask for support and we ask our police department to hear their Black community when we say there is a chance for you all to do better, to be the good guys, but it starts within the structure of the office you all work in as well as a self journey of each officer to dismiss any racist biases, generalizations or upbringing you may have encountered and remain objective. Just as you all like to say not all cops are bad, we are saying you're wrong, you are all responsible until something changes, just how all Black and Brown bodies suffer at the hands of the same generalization.

The Black and Brown communities specifically are told to move past trauma, and then are kept out of mental health conversations, which then leads to internalizing and pushing trauma further into our bodies, into our movements, our thoughts and actions. We can't continue in this cycle — we must end generational trauma — we are allowed to heal! We are allowed to live! We are allowed to feel welcomed in our own communities and shouldn't have to fear the infrastructures that support the majority. This country wasn't designed to support us; change needs to start from the bones of this country and the bones of this county.

And so many more.

Monique Desir is a volunteer organizer with Black Humboldt and prefers she/her pronouns.