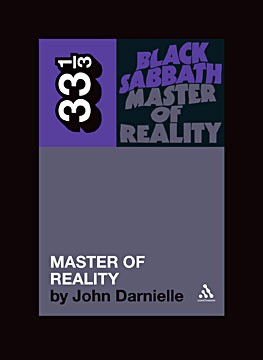 I know it's obvious, but it has to be stated as a starting point: The Mountain Goats are the greatest band of all time. This is primarily because bandleader John Darnielle is a supreme lyricist, though he also happens to be the No. 1 impersonator of 15-year-old mental institution patients totally obsessed with Black Sabbath circa 1985, a skill he recently employed in his authorship of the latest of Continuum's 33 1/3 series: Black Sabbath, Master of Reality.

While the 33 1/3 books typically provide ultra-geek, in-depth academic profiles of cult-classic albums, Darnielle's approach, using fact within fiction, is unique to the series (as far as I know). The book is written in the form of a mandatory therapeutic journal, the entries by a frustrated teen, Roger Painter, who, by detailing the background, nuances and hidden importances of the album known only by a true fan, hopes to convince his psychiatric councilor Gary to give him back his confiscated tapes.

"Normally on a morning like this I would put on my head-phones and just kick back ... Guess not today you assholes!! That was when I got the idea to try to tell you about my favorite tape ... If you don't think this is a good way to use this journal then fuck you Gary!" And so begins the 101-paged piece detailing Sabbath's 1971 release.

At just 34 minutes and 40 seconds long, you wouldn't think there would be enough crucial, behind-the-scenes album detail to fill over 100 pages, and you'd be right. Though Darnielle succeeds (for a while) in incorporating an interesting critique of the album within fictional recounting of day-to-day life within the hospital, the book seems to be primarily about a boy and his obsession rather than the nitty-gritty, in-depth profile readers have come to expect from the series.

By part two, the story has switched to an adult Roger Painter writing to Gary, seeking closure to his treatment from 10 years earlier. Still dwelling on the album as he comes to term with his adult life, his obsession appears unreal, and the continuation seems to be out of the writer's necessity to conclude the book rather than any realistic motive on the character's part. On the other hand, while Roger falls far short of what anyone would consider "wise," his adult voice lends a bit more scope and experience to the album's analysis, expanding on the history and possible motives for the album's creation in a way that would have been out of character from Painter's younger self.

More gimmick than literature, it's not Darnielle's vicarious album analysis that's flawed so much as his underdeveloped narrator's awkward recounting of it, resulting in a story trapped between the motives of fiction and fact while satisfying neither.