Blackberries for the Wily

And an end of summer pie 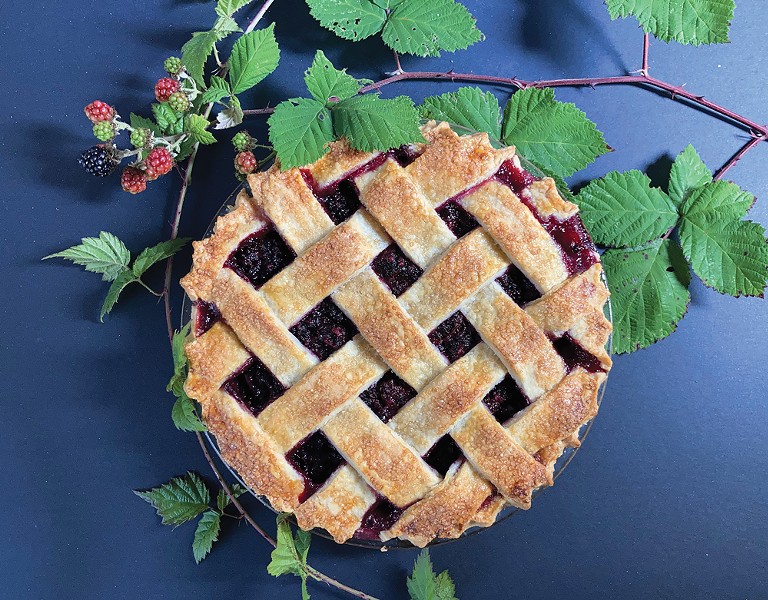 Photo by Holly Harvey A jammy blackberry pie worth the pain of picking.

I want to write about my soft-focus childhood memories of blackberry picking, a basket on my arm as Disney butterflies danced around me. But as happy as my recollections of berry picking are, it was always a sly business of risk and reward, greed and gluttony. The house I grew up in was defended on one side with thick, thorny arcs of menacing blackberry vines. If it was Disney, it was closer to the supernatural brambles Maleficent sent to thwart the prince. But over this patch, I was the battle-scarred, purple-fingered queen.

My size was not, for once, a disadvantage. I filled Tupperware containers and paint buckets with fruit gone fat in the shade below everyone's knees. I'd go back over sections the adults left seemingly bare, snaking my little hands deeper in the vines to pull out clusters, plucking only the softest ones with my fingers to avoid any snapping back, while I kept my forearm steady in the prickly, green tunnel of vines. It was like playing Operation with real stakes. The first thorns that caught my skin or hooked my T-shirt were always a shock, but the zing of those scratches dulled.

I learned to freeze instead of flinching when I felt a thorn. I'd calmly tug a prickly green whip or a woody tooth from my hand before scanning for the next score. The spoils of blackberry picking, I found, went to the wily, the steady-handed, the perseverant and the ones to whom glossy syrup over ice cream, jam-heavy slices of buttered toast and fresh berries with sugar and milk were worth just a little more pain.

One of the few neighbors we talked to was a short, wiry old man named Mr. Fitz. He'd walk with my brother and me and our dog if he came upon us heading toward the reservoir to fish, always with a golf club for a cane. And despite our obviously ample blackberry supply, he'd come by once or twice a summer with a giant coffee can of berries as a gift for my grandmother. Each time, she'd cook them down with sugar — that candy smell, thick in the house for days — and strain out the seeds, then pour the dark syrup into old jam jars we'd deliver to Mr. Fitz, who'd pretend to be surprised. Like I said: the wily.

Last weekend I took my daughter to raid the berries in her grandparents' backyard. I watched her small hands reach gingerly around the thorns, daunted only by layers of spider web. She called me over to a tangle of vines, breathless, pointing frantically at a cluster heavy as a bunch of grapes, deep in the shady interior and just a little too high for her. I reached in until the thorns caught the sleeve of my T-shirt — grimacing, I reached farther.

As I grazed the berries with my fingers, she shouted encouragement: "Remember, the blood will be washed away by the delicious taste of blackberries!" She wasn't wrong.

And so, to toast the waning summer with one last heavy coffee can of blackberries — some Himalayan, some native Pacific — I offer a pie that crosses seasons with late berries and early apples. The crust is one adapted from my trusty Joy of Cooking butter and shortening recipe and Nicole Rees' excellent Baking Unplugged, in which she disabuses us of the notion that a drop too much water will toughen your pie. Just don't overwork it and let the dough rest a couple hours to relax the gluten (yeah, I don't totally understand that), yielding tender flakiness without the stress of patching together crumbly, dry dough. Using vodka in place of some or all the water helps, too, as it evaporates faster than plain water — for more flaky air pockets — and won't make your pie taste boozy.

Throw the dough together in the morning or the night before, and pick those berries while it rests in the fridge. The sliceable, jammy filling, lumpy with whole berries, is partly thickened by a finely grated apple instead of just cornstarch (a tip from my wily sister-in-law), which keeps it from getting gummy, running all over the plate or making your bottom crust soggy.

The recipe is easily doubled if your berries are bountiful. If using frozen berries, measure and make the filling while they're still frosty. Taste the berries: If they're a little bland, add a teaspoon of lemon zest to the filling.

1 apple, peeled and grated on the smallest holes of a box grater

Make the crust at least two hours ahead. Whisk together the flour, salt and sugar.

Using the largest holes on a box grater, grate the butter into the flour, tossing it to coat the shreds as you go. Add the shortening in small spoonfuls. Using your fingers or a pastry blender, quickly work the two fats into the flour mixture until it's the texture of sand with lumps the size of peas.

Sprinkle the chilled water and vodka a tablespoon at a time into the mixture, using a rubber spatula to mix and press it. Keep adding and mixing until it starts to hold together as a dough. Use your hands to turn it in the bowl, incorporating any dry mixture left at the bottom, sprinkling more water or vodka as needed.

Form the dough into a ball and split it evenly. Press the halves into 4-inch discs and wrap each one tightly in plastic wrap. Let them rest in the refrigerator for at least 2 hours.

After the dough has rested, flour your work surface and roll your dough into a 9-inch circle and lay it in your pie pan. (This is infinitely easier with a pie ring, a plastic circle you place your dough in and roll to the edges.) Return it to the refrigerator.

Make the filling. In a large bowl, combine the sugar, cornstarch, salt, cinnamon and grated apple. Gently add the berries, folding them in until they're coated.

Scrape the filling into your pie shell. Roll out the other disc of dough and cover the pie. Weave a lattice or use a sharp knife to make 5 or more cuts in a solid top crust to release steam. Brush the crust with some of a beaten egg and sprinkle with Demerara sugar. Chill the pie 15 minutes.

Place a baking sheet on the center rack of the oven and heat it to 425 F. Bake the pie on the baking sheet (it may bubble over and the sheet will also help your bottom crust brown) for 15 minutes. Reduce the temperature to 375 F and bake for another 50-55 minutes, until the crust is golden brown and the juice is thick and bubbly.

Cool for as long as you can stand before serving.