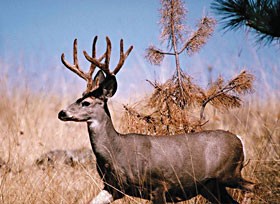 California blacktail deer rifle season opened on Aug. 25 in zone "B4" (all lands west of the Eel River), but most of the land in that zone is privately owned. Now, many sportsmen and women are gearing up for the season opening of zone "B1" -- lands that lie east of the Eel River -- on Sept. 15. For many hunters, this will be their only chance at a successful 2007 blacktail season.

Johnny Lewis of Fortuna, age 27, is one sportsman looking forward to the Sept. 15 opening. After a successful 2006 campaign, where he was able to harvest a 3-by-3 California blacktail, he's very eager to get the 2007 season underway. "I did pretty well last year out on the South Fork, (South Fork Mountain) so I figure I will try my luck out there again this season," he said. "I tend to hunt from Mad River Ridge all the way through to the back side of Ruth Lake before the season is over." The area is part of Eight Mile Ridge, which U.S. Forest Service Road One lies on.

Lewis is a third-generation Humboldt County native with whom I have had the pleasure to be close family friends for most of my life. At a young age, I was able to meet his grandfather, Richard Lewis, also of Fortuna, who before his passing was able to harvest one of the most extensive collections of trophy animals in the United States. Richard Lewis' collection includes the "Grand Slam" of Bighorn Sheep -- that is, a collection of five different species of bighorn including the elusive Rocky Mountain Bighorn. At one time, Lewis was one of only five bighorn "Grand Slams" in the world. To this day, Lewis' "Grand Slam" is on display in Ferndale's Palace Saloon.

How many bucks are out there? When I spoke with him, David Lancaster, a unit wildlife biologist for the California Department of Fish and Game, seemed to think there were plenty.

"We have a quota of 55,000 blacktail deer tags for the 2007 season, of which only about 40,000 were claimed," he said. I asked Lancaster what the success rate was for last year's season, as gauged by the number of deer tag stubs returned to the Dept. of Fish and Game after a hunter bags a buck. "Last year the success rate of hunters was at around 21 percent, and fluctuates from there down to the low teens, depending on the weather during that year's season," he said.

With the hot weather of this past August, and the trend seeming to continue on through September, the blacktail season may turn out to be slow for most hunters, due to the elusive deer staying bedded down and shaded up for most of the day, only moving in early morning and late evening to feed and drink. Many of the North Coast's outdoorsmen and outdoorswomen will be eagerly anticipating the county's first rains, which tend to drive the elusive black out into feeding.

Why? The blacktail dislikes feeding in strong rain and wind, because these elements can dull its strongest senses -- hearing and smell -- leaving it vulnerable to predators. So when those first rains hit, the blacktail heads out to bulk up, so as to ride out the stronger storms in shelter.

East of the Eel, there's no shortage of places to seek the blacktail. I was able to speak with Susan Richey, a public information officer for the Bureau of Land Management for Humboldt and Mendocino counties. "In Humboldt and Mendocino counties, we have about 220,000 acres of land that is public access," Richey said. Humboldt County BLM lands opening for rifle hunting this weekend include Lacks Creek Management Area (off Hwy 299) and Butte Creek Management Area (off Hwy 36). The King Range National Conservation Area, part of zone "B4," ends its hunting season on Sept. 30. Call the Arcata BLM office at 825-2300 for details.

I wish all of the sportsmen and sportswomen who have read this article luck and a successful 2007 blacktail campaign. To all of you, remember the future of the sport of hunting lies in the youth and the next generation. So the next time you go out for a hunt, bring your son or daughter, or a neighborhood youth who may not have an outlet to the great outdoors and to the great sport of hunting.

This will be an experience a child will never forget. Ask any sportsman or woman about their first successful harvest of a blacktail buck and you will see the joy in their eyes as they tell you their story.

Grant Manzi is a lifelong hunter, a Ferndale native and a student at Humboldt State University.