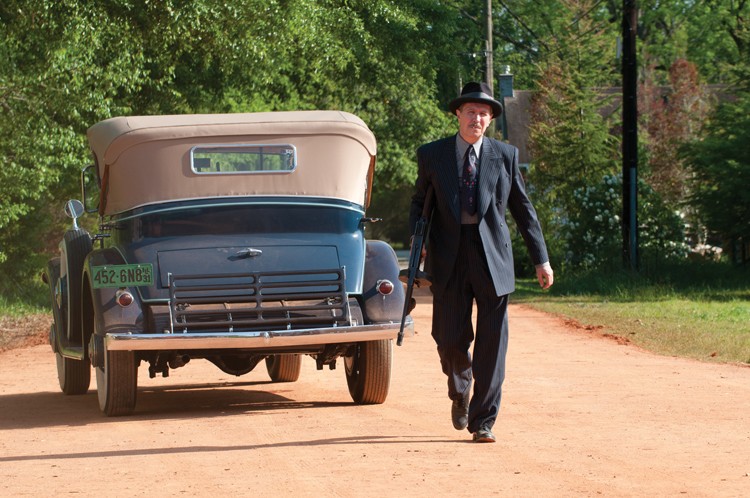 LAWLESS. From a distance, Lawless looks like about nine-tenths of a great movie. Director John Hillcoat (The Proposition, The Road) specializes in methodical, nuanced meditations on men of violence. Here again he constructs a reality that demands severe action of its inhabitants. That reality, backwoods Tennessee circa 1930, is drawn from a novel by Matt Bondurant, which in turn was inspired by real events. Gloom-rocker Nick Cave, who also wrote The Proposition, adapted the screenplay.

These guys are specialists in combat and desolation, making a movie about bootleggers versus the establishment. Seems like a win-win, especially considering the amazing cast they assembled. With Tom Hardy in the lead, supported by Jessica Chastain, Guy Pearce and Gary Oldman, Lawless should boast one of the best ensemble performances of the year. But sadly, the performances are as mismatched and clumsy as the rest of the movie.

Hardy, Jason Clarke and Shia LaBeouf play the brothers Bondurant. They operate a café and filling station way back in the hills of Franklin County, Tenn. They also dominate the illicit liquor trade, with a little cooperation from the good ol' boys of local law enforcement. When big-city crime (in the form of Oldman's Tommy-gun-toting Floyd Banner) crops up in sleepy Franklin County, drawn by the steady stream of moonshine, Special Deputy Charlie Rakes (Pearce) is close on its heels. And when the Bondurants refuse to roll over and profit-share with him, Rakes starts an ever-escalating war. Caught up in the conflict are a former Chicago showgirl (Chastain) and a coy preacher's daughter (Mia Wasikowska) who fall for Hardy and LeBeouf, respectively.

The violence is stark, realistic and disturbingly memorable. But bloody beatings do not a movie make. Between the fistfights and shootouts, Lawless is unevenly paced, often unconvincingly acted, and disappointingly impotent.

For one thing, Hillcoat uses the crutch of a voiceover to bookend the movie. This device is often a lazy substitute for visual storytelling, and here it allows LeBeouf to indulge his painfully phony Tennessee accent while delivering an unnecessary history lesson on Prohibition. The movie's pacing and structure are also problematic. The first act builds gradually, effectively establishing atmosphere. But midway through, Hillcoat drops back and punts, using voice-over to fast-forward the story, effectively undoing his own smart filmmaking. By the ostensible climax, all dramatic tension has evaporated. Frustrating.

Acting, or the directing of the actors, may be the movie's weakest point. I'll acknowledge a bias here:  I'm not generally a LeBeouf fan. However, he isn't as unlikeable or unconvincing in this as I expected. That being said, his dialect coaches should receive an angry letter. And I don't think he has the presence to carry off such a demanding role. Hardy, as always, is a pleasure to watch:  With his cardigan sweater and grunting, he folds some much-needed humor in with the terrible blood-letting. The most troubling, out-of-place performance is Pearce's. He invests himself fully in the character, but that character seems ill-conceived. His Charlie Rakes is a nightmarish caricature of Chicago corruption, a rapacious dandy who nonsensically mutters Bible verse and may be a closeted homosexual. Pearce plays it to the hilt, but he belongs in a different movie.

A superb cast, a talented director, an interesting historical period, illegal booze -- it's all there. It just isn't put together quite right. Lawless disappoints because its unrealized potential is evident in every frame.  R. 115m.

2016: OBAMA'S AMERICA. If this was a better movie, I might be worried. Dinesh D'Souza is the kind of pandering neocon intellectual who impressionable voters seem to love. And his lame-brained crackpot theory about Obama's agenda might be insane enough to seem plausible to those voters. Fortunately, the movie he's foisted on us is so poorly crafted, so stridently divisive, that it will only appeal to people who made up their minds about Obama long ago. In the words of one very enthused audience member at Friday night's screening: "You want to show it to people, but they won't listen. They're all brainwashed."  Wow.

D'Souza posits that Obama inherited a virulently anti-colonial bent from his father, whom he only met once. The tenure of their relationship isn't important, apparently. What is important is D'Souza's thick-witted, barely supported thesis, which posits that in service of his father's will, Obama intends to destroy the United States, both economically and militarily. This will allow him to raise up the colonized nations of the world and plunge us back into the Cold War. There's a lot of Reaganite Kool-Aid drinking going on in this thing.

As I said, it's a blessing that 2016 is so shoddily constructed. It stretches about 15 minutes of content to feature-length with a lot of B-grade second-unit work and footage of D'Souza talking on the phone with an assortment of third-tier conservative pundits. Why on the phone? Was it too expensive to get them in the same room? Too dangerous? Not that it matters. This movie doesn't even pretend at centrism or attempt to reach across the aisle. It just preaches to the converted. PG. 87m.

THE COLD LIGHT OF DAY. A young Wall Street trader (Henry Cavill) takes a sailboat trip with his family in Spain, because why the hell not? His family gets kidnapped, and it turns out his dad is a CIA agent, because he's Bruce Willis. Throw in a mysterious briefcase and Sigourney Weaver and you have yourself this movie. PG13. 93m.

Your Arcata Theatre Lounge overview starts and ends with Sci-Fi Pint and Pizza Nights. Thursday's iteration, from 6 to 10 p.m. features robots! In Assassin (1986), Robert Conrad must stop a megalomaniac scientist's robot from assassinating the president, and in Robot Monster (1953), an alien called Ro-Man attacks Earth with his "calcinatory death ray." Friday is Ocean Night, featuring Otter 501 at 6:30 p.m. This quasi-documentary follows an orphaned baby otter from Mendocino whose absurd cuteness will liquefy your brain. From cute to clever: Saturday at 6 p.m. brings Joss Whedon's witty space western Serenity. PG13. 6 p.m. And next Wednesday completes the cycle with another Sci-Fi night, 6-10 p.m. this one with European seasonings: Voyage to the End of the Universe (1963) comes from Czechoslovakia while Assignment: Outer Space hails from Italy.

THE DARK KNIGHT RISES. Is it a fascistic diatribe against the Occupy movement, or just a Batman movie? Discuss. PG13. 164m.

THE EXPENDABLES 2.  Stallone, Schwarzenegger, Norris et alii employ steroids and explosives as they rage against the dying of the light. R. 102m.

THE INTOUCHABLES. After a paragliding accident leaves him a quadriplegic, a French aristocrat hires a black man (!) from the projects (!!!) to be his caretaker. French with subtitles. R. 112m.

THE ODD LIFE OF TIMOTHY GREEN. A barren couple writes down their hopes for a young'un, buries them in the backyard, and hark, a dirty kid emerges. PG. 100m.

THE POSSESSION. Available for rent: Body of young girl. Tenant must be malevolent spirit who can freak parents out by making girl convulse and puke locusts. PG13. 91m.