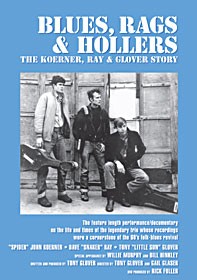 You need look no further than that quote from guitarist Dave "Snaker" Ray to identify the ethos that formed the foundation of seminal acoustic folk-blues trio Koerner, Ray & Glover. The Minnesota-based threesome, rounded out by fellow 12-stringer "Spider" John Koerner and harp-wailer Tony "Little Sun" Glover, re-revolutionized the folk and blues scene in the 1960s with their trademark hybrid style of high lonesome field hollers and Woody Guthrie half-full of Jim Beam, influencing everyone from the Beatles to Bob Dylan (who goes so far as to reference them in his fragmented autobiography) along the way. Now, after wallowing in public television and developmental purgatory for years, the definitive performance/documentary Blues, Rags & Hollers (named after their debut album) is available on DVD.

That's a cue to get down on your knees and thank your lucky, booze-addled stars.

After viewing the program for only a few minutes, you begin to realize why you've probably never heard of these guys; the DVD opens with their only filmed performance ever, which was aired on Minnesota public access television 20 years after the group's inception.

It is also here that you begin to understand why, to quote one of the DVD's chapters, "they never got rich." They just loved to play, period. KR&G never had a PR agent, no road managers, no nothing. The guys just put up flyers and played where they wanted, and where they were wanted. These are men who could just as easily sell you insurance as knock you flat on your ass with a fiery rendition of "Black Dog Blues." (In fact, Ray did own an insurance firm for a time later on in life.)

As Glover put it, "We never tried to make a living off of playing music; music is just like an old friend, and you never try to make money off of an old friend. You just hope they're there for you when you need them."

The documentary is presented in a style that doesn't belie the band's tendencies. Footage is steady but slightly grainy, and interviews are conducted in the backwoods and semi-squalid dwellings, with music from the band itself, along with Sonny Boy Williamson, Fred McDowell and Son House, interjecting throughout. The candidness of the presentation is brash, unapologetic and unflinchingly truthful.

This program's very existence is its own greatest quality. Without it, many true music fans (this writer included) would have been left clueless as to the missing link between Woody Guthrie and the '60s blues revival. Make no mistake, whether you realize it or not, these guys are the reason you're into Leadbelly.

Josh Ruffin is a freelance critic in Augusta, Ga.