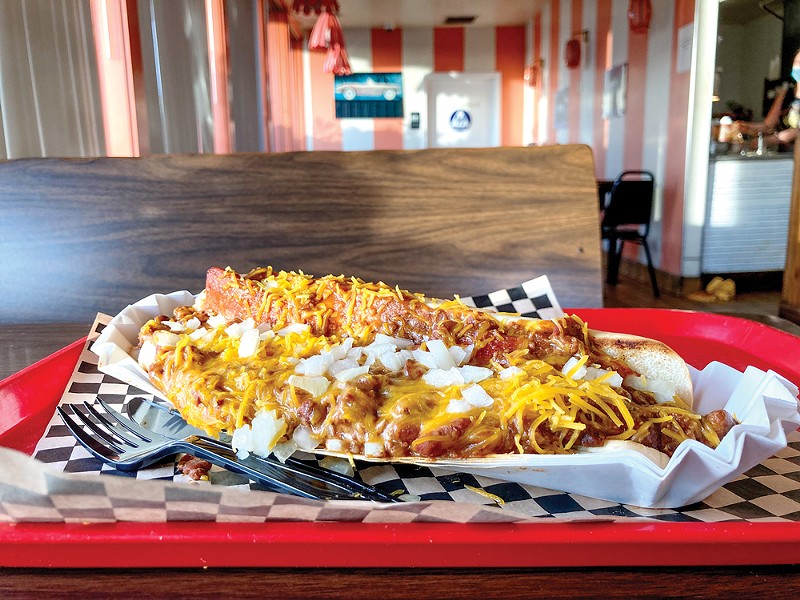 Photo by Jennifer Fumiko Cahill The footlong chili cheese dog with onions at Bob's Footlong in Fortuna, founded in 1949.

Photo by Jennifer Fumiko Cahill Piling it on at Bob's Footlong.

Cheyenne Moreno places a split open footlong hot dog on the flat-top grill behind the counter at Bob's Footlong. The link hisses louder when she drops a grill press on it and turns to warm the bun on the neighboring grill. She flips the dog and covers it in cheese slices and an aluminum dome to speed the melting. A minute later, with the hot dog splayed over its mustard-streaked bun, she's spooning on a flood of mild meat-and-bean chili, asking more of the fluted paper tray than it can manage. Shredded cheese, a handful of chopped onions and Fortuna's signature forearm-length chili cheese dog — destroyer of shirts and resolutions — is ready.

According to the brief history on the shop's website, Bob's Footlong was founded in 1949 by Bob Broome and Lula Mclure as a mobile business set up at the Humboldt County Fair and later by the Fortuna movie theater on Main Street. For the last three years, Cheyenne's parents Jose and Tanya Moreno have owned and run the local institution at the brick and mortar location on 12th Street, where it's been slinging milkshakes, burgers, dogs and fries since 1967. Now the restaurant is for sale and the Morenos have announced it's shutting its doors Nov. 19.

On a Friday afternoon, Tanya Moreno takes a break from the grill between rushes and sits in the last wood-grained laminate booth in the back. She straightens her tie-dyed Bob's shirt and rubs her eyes. Owning a restaurant, she admits, was her husband's dream, not hers, and with his other job, he hasn't been able to be at the restaurant as much as they'd initially hoped.

The first year, Tanya says, customer nostalgia ran high and business was good. "We had heard the community say they wanted it to stay the same," she says. To that end, she reached out to Karen and Mike Smith, whose parents Ozzie and Joanne bought Bob's from its founders before passing it down to them, and got the original chili recipe, which bubbles in the kitchen today. Tanya says it was well received, though some, she adds with a chuckle, insisted the new owners had changed the chili.

But for the addition of a fancy red espresso machine, Tanya, who has been coming to Bob's for milkshakes and hot dogs since she was a teenager, says the food and the atmosphere remain the same.

When the pandemic and shelter in place hit Humboldt, Tanya says Bob's only closed for a couple weeks before shifting to curbside pickup and delivery. While regulars still came by, it was slow going. A pair of Payroll Protection Plan loans kept the business afloat and the dozen or so mostly part-time employees paid. But that ended two months ago. "It's been downhill from there," says Tanya.

More customers drift in, ordering through Plexiglas barriers at the counter while Tanya's daughter works the fryer and coworker Teresa Diaz blends a milkshake at the whirring machine on the opposite end of the open kitchen.

Before Bob's, Tanya, who'd done hair for a while and is looking forward to a data entry job she already has lined up, had never worked in food service. Hiring and managing employees — and finding replacements or covering their shifts herself at the last minute — has been hard, she says. Since losing her manager, Tanya says she's been on duty full time and, after taxes and other overhead, it just isn't worth it.

"The restaurant business is tough. People are cranky," Tanya says, and not everyone understands cooking burgers and fries to order takes longer than slipping a pre-made Happy Meal into a bag. With giggle, she adds, "They think we're fast food and they're huffin' and stompin' their feet."

Still, Tanya is confident someone with more experience and a passion for the business could do well with Bob's Footlong, given its storied history and following. She points out that a new owner could easily convert the space into another kind of restaurant, though she'd miss the soft serve milkshakes. The business and all its attending equipment are on the market for $170,000. "I don't know about the chili recipe, though," says Tanya. "That was Karen's."

Since posting the impending closure on Facebook on Nov. 9, the staff has been slammed with customers scrambling for one last order, a financial boost that will help with mounting expenses. Another laugh bubbles up as she asks, "Where were these people?"

Asked if she'll miss anything about owning the restaurant, she smiles and answers, "Sorry, no," before quickly amending that she'll miss the young people who work there alongside her and her daughter. "They're always happy," she says, glancing at Cheyenne and Diaz behind the counter. "They've got great energy — they're laughing."