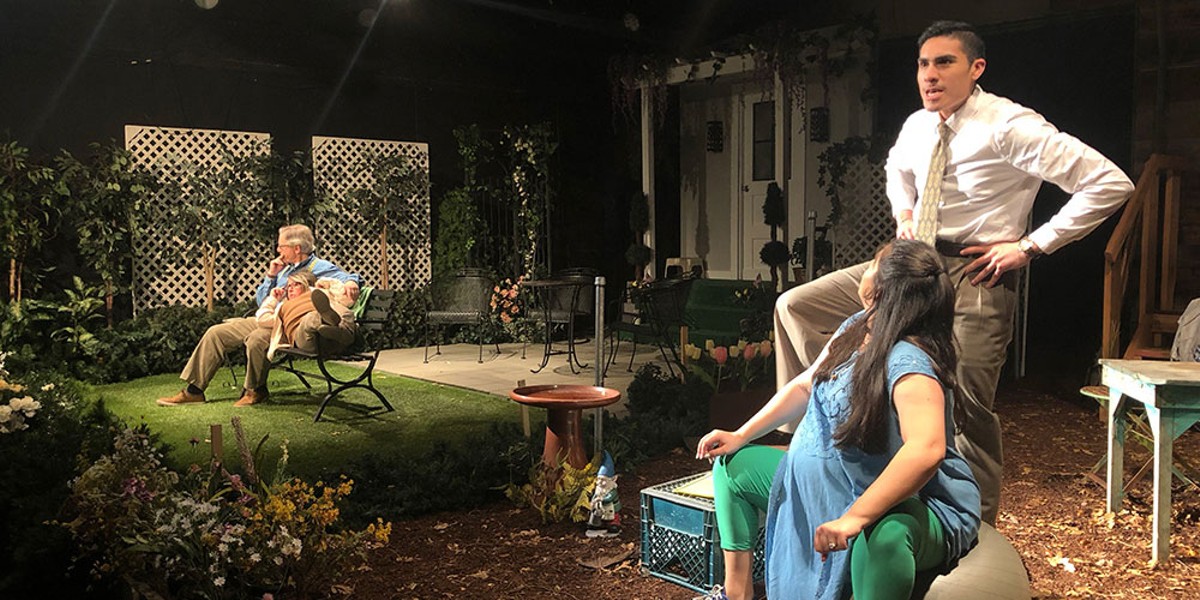 Neighbors can be odd. Next-door neighbors even more so. You're not under the same roof, like siblings. But you are expected to get along with them, albeit for reasons of geography rather than genetics, and, like family, you don't always get to choose them.

In the comedy Native Gardens by Karen Zacarias, the first offering of the calendar year from North Coast Repertory Theatre, the purchase of a house in a historic, upscale suburb of Washington, D.C., means Pablo del Valle (Victor Parra) and his pregnant wife Tania (Amy Beltran), find themselves living the dream, but with a caveat. Just over a chainlink fence with some climbing ivy on it are Virginia and Frank Butley (Denise Ryles and Scott Q. Marcus), an older couple who have lived in the neighborhood for some time and take great pride in their home and every inch of their lot. The Butleys invite Pablo and Tania over for some wine in their immaculate backyard, as neighbors do. Pablo, an associate at a big-shot law firm, has made the impulsive move of inviting the whole office — partners and all — to a barbecue the following week, in time for which he and Tina would like to see the aforementioned fence replaced.

Now, neighbors (myself included) deal with fencing stuff like this all the time in prosaic fashion. But that would not make for a very engaging night at the theater. Native Gardens adds interesting complications, even if it's a sometimes uneven comic experience. There are problems with replacing the fence in time for the planned barbecue. Among these are Frank's longstanding obsession with winning a coveted award for best garden in the neighborhood and Pablo's discovery, after looking at the plans for their lot filed with the city, that the true dividing property line is 2 feet into the Butleys' yard. This last issue necessitates work by a surveyor with tags and plans for a new fence along the correct boundary — all threatening doom for Frank's beloved, award-aspiring bed of tulips — in time for the upcoming weekend.

Putting aside the vexing distraction that Zacarias' play exists in a world in which city surveyors find the time to come out the following day and contractors can do estimates and begin work within the week, Native Gardens does have a lot of good ideas for an audience to take in. Other than talk of walls, fences, barriers, feuding neighbors and attempts at understanding and compromise, there's even more going on: Pablo and Tania are Latino but their backgrounds aren't what many white Americans expect. He comes from a wealthy Chilean family and chose to live in the U.S. after attending boarding school, while she hails from New Mexico, part of a family that's lived in America for more than a century, and speaks very little Spanish (other than a few choice curse words).

These distinctions are lost on the Butleys, who fit the bill as NPR-listening, wine-sipping, upper-middle class baby boomers — the kind of people these days called coastal elitists, although in the play they are pegged as moderate Republicans. Really, their politics are less important than their love of azaleas and other fancy invasive species, a fixation that deepens when Frank finds out Tania plans to grow a native garden ("But they're just ... weeds!"). You could say Frank and Virginia are portrayed rather broadly and cartoonishly, but that might depend on your neighbors.

As director, Michelle Purnell has a fine hold on a play that has a lively interchange of yelling and pronouncements throughout (and scenic designer Diana Lynn oversees a great stage's worth of fences, yards, decks and flowers), and still Native Gardens doesn't always hit its marks. There is a great, talky, provocative scene toward the end of the play between Beltran and Ryles, but it exists amid some fits and starts of pacing and an ending that's too pat (and predictable). But let's face it, for a production, there's good timing and then there's great timing. Native Gardens touches not just on borders but also what we think we know and don't know about neighbors, the idea of who "owns" land and who doesn't, and who or what is indigenous or invasive. Whatever its faults, this is a play for this year, this month and this week.

Native Gardens plays at the North Coast Repertory Theatre in Eureka on Fridays and Saturdays at 8 p.m. through Feb. 9, with Sunday matinees at 2 p.m. on Jan. 27, Feb. 3 and Feb. 10. For more information, call 442-NCRT or visit www.ncrt.net.

Family theater returns to the Arcata Playhouse Feb. 2 with The Man Who Planted Trees by Scotland's Puppet State Theatre. Call 822-1575 or visit www.arcataplayhouse.org.